Comments (0)
Add to wishlistDelete from wishlist
Cite this document
Summary
Hardly had the fires died down in the suburbs of Paris, as the November rioting by immigrant youths petered out, than the flames of another conflict fed by France's colonial past began to sweep through France's political landscape.
The law of February 23, 2005, as it is known, was intended to recognize the contribution of the 'harkis', the 200,000 or so Algerians who fought alongside France's colonial troops in their country's war of independence, from 1954-62, before being abandoned to a dreadful fate when the French withdrew - "about 130,000 were executed as traitors." (Henley, 2005)…
Download full paperFile format: .doc, available for editing
HIDE THIS PAPERGRAB THE BEST PAPER95.8% of users find it useful 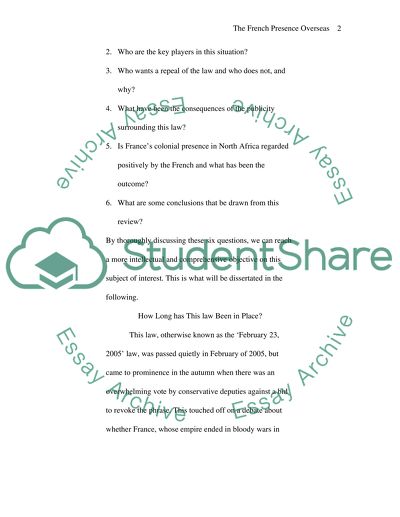 Download file to see previous pages This law, otherwise known as the 'February 23, 2005' law, was passed quietly in February of 2005, but came to prominence in the autumn when there was an overwhelming vote by conservative deputies against a bid to revoke the phrase. This touched off on a debate about whether France, whose empire ended in bloody wars in Indochina and Algeria, had learnt from its colonial experience.
The trouble started in February when lawmakers quietly slipped a clause into a bill requiring schools to "recognize in particular the positive character of the French overseas presence, notably in North Africa."
Some of the key players in this situation would be: President Jacques Chirac of Paris, Prime Minister Dominique de Villepin, Interior Minister Nicolas Sarkozy, Gilles Manceron, and Olivier Petre-Grenouilleau - a respected historian who was accused of making statements in an interview which implied that the slave trade was not a crime against humanity. (In fact, he said that it didn't constitute genocide). Gilles Manceron noted that for some historians, the treatment of the harkis exemplifies how France has basically failed to deal with aspects of its past, saying "The state put them in military camps or in isolated camps in forests, cut off from the rest of the French population. This isolation is comparable to the treatment of indigenous people in the colonies." (Gehmlich, 2006). Hamlaoui Mekachera, junior minister for veterans' affairs who is also of Algerian origin and in fact actually fought for the French army during the Algerian war, praised the law, saying it was "a historic moment for people of all origins who have been repatriated." He went on to say, "The current debate must not allow us to forget the real range of measures (the law) contains." (Geimlich, 2006).
Who Wants a Repeal of the law and who Does not, and why
More than 1000 historians, writers and intellectuals have signed a petition demanding the repeal of this law. "In retaining only the positive aspects of colonialism this law imposes an official lie on massacres that at times went as far as genocide on the slave trade, and on the racism that France has inherited," says the petition, which has also been signed by one of France's best-loved humorists, Guy Bedos, and a leading film director, Patrice Chereau.
The principal objection to the law is ...Download file to see next pagesRead More
Share:
Tags
Cite this document
(“The Controversy Surrounding the law on the Positive Role of the French Essay”, n.d.)
The Controversy Surrounding the law on the Positive Role of the French Essay. Retrieved from https://studentshare.org/miscellaneous/1532202-the-controversy-surrounding-the-law-on-the-positive-role-of-the-french-presence-overseas

“The Controversy Surrounding the Law on the Positive Role of the French Essay”, n.d. https://studentshare.org/miscellaneous/1532202-the-controversy-surrounding-the-law-on-the-positive-role-of-the-french-presence-overseas.
Comments (0)
Click to create a comment or rate a document

Grown-ups habitually recognize, directly after meeting someone, what form of communication is about to take place, and what the limitations restricting the communication will be (Sutton-Smith & Ariel, 2002). Because role-play conversation takes place in a fantasy, staged world, it is less hampered by physical and social reality.
Between the ages of 5 and 7, children gain a broad array of social and cognitive abilities (Amsel & Byrnes, 2002). Psychologists have discovered that these are formative years for the growth of mind theories, the growth of the ability to construct and represent stories, the growth of social cognition, the growth of the personality, the growth of advanced fantasy play, and the growth of intersu...
9 Pages(2250 words)Case Study
sponsored ads
Save Your Time for More Important Things
Let us write or edit the essay on your topic "The Controversy Surrounding the law on the Positive Role of the French Presence Overseas" with a personal 20% discount.
GRAB THE BEST PAPER

Let us find you another Essay on topic The Controversy Surrounding the law on the Positive Role of the French Presence Overseas for FREE!