Comments (0)
Add to wishlistDelete from wishlist
Cite this document
Summary
In today's world, freedom of speech and the freedom to the media have made the general public more aware of all the activities that are taking place around the world. It is now possible to know what is going on across the world live through satellites. Technology has enabled us to do things that we never imagined before…
Download full paperFile format: .doc, available for editing
HIDE THIS PAPERGRAB THE BEST PAPER94.2% of users find it useful 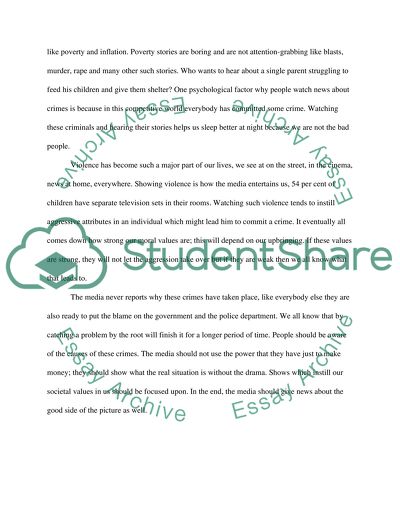 How does the Media Report or Treat Violent Crime In today's world, freedom of speech and the freedom to the media have made the general public more aware of all the activities that are taking place around the world. It is now possible to know what is going on across the world live through satellites. Technology has enabled us to do things that we never imagined before. When the media reports events and news, they give it their perspective and their perspective can change the way people think about a particular event or incident. Crime has always been part of the world, it is through the media that we have become aware of it and have realized its intensity. The way the media portrays a crime is the way the world will perceive it, the more they exaggerate to increase viewer ratings the more the world lives in fear.
Statistics have shown that the crime rate has decreased during the past few years. There was double digit crime inflation during the 1970's. People have that feeling that the crime rate has increased due to the way the media has been portraying each n' every incident! They dramatize the event just to increase their number of viewers. An FBI new release said that the crime rate has increased by only 2.5 per cent nationally. The crime rate has dropped 40-50 per cent since the time it was at its peak. It is funny how none of the media have shown these figures with the same boldness as they do other headlines.
As per "Official crime statistics", most of the crime is non-violent, but media reports in many instances have suggested it to be the opposite. It is not only the media's fault. We as viewers are so interested in such news that they can't help it. If they want to make money they will show what the people want to see. There are many other bad things that affect our society, like poverty and inflation. Poverty stories are boring and are not attention-grabbing like blasts, murder, rape and many other such stories. Who wants to hear about a single parent struggling to feed his children and give them shelter One psychological factor why people watch news about crimes is because in this competitive world everybody has committed some crime. Watching these criminals and hearing their stories helps us sleep better at night because we are not the bad people.
Violence has become such a major part of our lives, we see at on the street, in the cinema, news at home, everywhere. Showing violence is how the media entertains us, 54 per cent of children have separate television sets in their rooms. Watching such violence tends to instill aggressive attributes in an individual which might lead him to commit a crime. It eventually all comes down how strong our moral values are; this will depend on our upbringing. If these values are strong, they will not let the aggression take over but if they are weak then we all know what that leads to.
The media never reports why these crimes have taken place, like everybody else they are also ready to put the blame on the government and the police department. We all know that by catching a problem by the root will finish it for a longer period of time. People should be aware of the causes of these crimes. The media should not use the power that they have just to make money; they should show what the real situation is without the drama. Shows which instill our societal values in us should be focused upon. In the end, the media should give news about the good side of the picture as well.
Works Cited
1. Levitt, Steven D. (2006) Is the New Crime Wave upon us Don't Believe the Headlines; the New York Times. Retrieved on April 4, 2008 from http://freakonomics.blogs.nytimes.com/2006/06/15/is-the-new-crime-wave-upon-us-dont-believe-the-headlines/
2. The Australian Psychological Society Ltd. (2000). Media Portrayals on Crime. Retrieved on April 4, 2008 from http://www.psychology.org.au/Assets/Files/media_portrayals_of_crime.pdf Read More
Share:
Tags
Cite this document
(“Media Report or Treat Violent Crime Essay Example | Topics and Well Written Essays - 500 words”, n.d.)
Media Report or Treat Violent Crime Essay Example | Topics and Well Written Essays - 500 words. Retrieved from https://studentshare.org/miscellaneous/1531702-media-report-or-treat-violent-crime

CHECK THESE SAMPLES OF Media Report or Treat Violent Crime

... assumes priority and significance since the disease is a progressively degenerating one if not properly treated and controlled through interventionists measure and self-management methods. Considering the fact that individual patients have to evolve their own self-management routines by knowing about their bodies and how it would react to situations and circumstances, the aspect of self-management could be seen in terms of how effective strategies are evolved by individual patients to put minimum risk upon themselves, and others in coping with their arthritic conditions. (Good acre, 2006, P 7-14). The reliability of the research study could be seen in terms of its ultimate results in which it was stated that interventionist strategies...
9 Pages(2250 words)Report

That rival is United Technologies which has only $63 billion in market capitalization but has a very enviable healthy balance sheet. It is awash in cash and buying up assets that other companies are trying to sell, including those from G.E. itself. General Electrics example of an amalgamated business cong...
12 Pages(3000 words)Report
sponsored ads
Save Your Time for More Important Things
Let us write or edit the essay on your topic "Media Report or Treat Violent Crime" with a personal 20% discount.
GRAB THE BEST PAPER

Let us find you another Essay on topic Media Report or Treat Violent Crime for FREE!