Comments (0)
Add to wishlistDelete from wishlist
Cite this document
Summary
Morris sold his photocopying and laminating business for $95,000 to Beth. Because Beth did not have the money to pay cash, Morris agreed to an immediate payment of $35,000 with the balance payable out of future profits over the next three (3) years.
In the first six (6) months the business did well and Beth was able to pay Morris a further $5,000…
Download full paperFile format: .doc, available for editing
HIDE THIS PAPERGRAB THE BEST PAPER93.1% of users find it useful 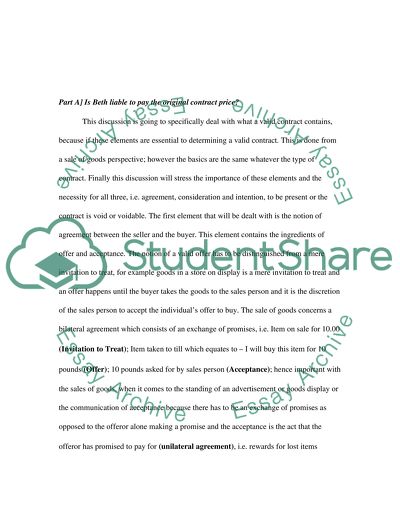 Download file to see previous pages Beth's profits fell alarmingly.
Beth advised Morris that financially she could no longer continue with the agreement and would have to close the business. Further, she accused Morris of knowing that the competitor was about to open up and therefore she was commencing legal action to rescind the contract based on fraudulent misrepresentation.
Morris contacted Beth and made the following comments: "I absolutely deny your accusation. By my reckoning you still owe me $55,000. However, if you continue with the agreement I'll reduce that amount to $35,000." Beth accepted the deal.
Six (6) months later Beth landed a huge contract laminating all the posters for a chain of tourist attractions along the north coast of New South Wales. Beth's profits have soared. Morris is now demanding that the original contract price be complied with (i.e. Beth pays the remaining $55,000).
This discussion is going to specifically deal with what a valid contract contains, because if these elements are essential to determining a valid contract. This is done from a sale of goods perspective; however the basics are the same whatever the type of contract. Finally this discussion will stress the importance of these elements and the necessity for all three, i.e. agreement, consideration and intention, to be present or the contract is void or voidable. The first element that will be dealt with is the notion of agreement between the seller and the buyer. This element contains the ingredients of offer and acceptance. The notion of a valid offer has to be distinguished from a mere invitation to treat, for example goods in a store on display is a mere invitation to treat and an offer happens until the buyer takes the goods to the sales person and it is the discretion of the sales person to accept the individual's offer to buy. The sale of goods concerns a bilateral agreement which consists of an exchange of promises, i.e. Item on sale for 10.00 (Invitation to Treat); Item taken to till which equates to - I will buy this item for 10 pounds (Offer); 10 pounds asked for by sales person (Acceptance); hence important with the sales of goods, when it comes to the standing of an advertisement or goods display or the communication of acceptance because there has to be an exchange of promises as opposed to the offeror alone making a promise and the acceptance is the act that the offeror has promised to pay for (unilateral agreement), i.e. rewards for lost items returned to the offeror. Therefore the sale of goods concerns a bilateral agreement, where two promises are exchanged as the offer and acceptance. An offer is a clear promise to be bound, as long as terms are accepted. A valid offer must be clearly communicated by writing, mouth or act in order to allow the other person or group of persons1 to decline or accept. In relation to sales of goods there is no requirement for the agreement and offer to be in writing, as with the sale of property; however the offer has to be certain in its terminology and must be clearly distinguishable from an invitation to treat. In respect to certainty of terms both parties must make their intentions clear, as the courts will not enforce a vague agreement2 or an incomplete agreement3; in addition it has to be more than a wish to enter negotiations, which the individual does not want to be bound (invitation to treat)4. Therefore the elements of a valid ...Download file to see next pagesRead More
Share:
Tags
Cite this document
(“Law case Essay Example | Topics and Well Written Essays - 1500 words”, n.d.)
Law case Essay Example | Topics and Well Written Essays - 1500 words. Retrieved from https://studentshare.org/miscellaneous/1531377-law-case

CHECK THESE SAMPLES OF Law case

Some of the more important rights bestowed upon employees by the employment law are the right to claim wrongful or unfair dismissal and payment for redundancy. Other legislation, such as the health and safety statute and the insolve...
7 Pages(1750 words)Case Study
sponsored ads
Save Your Time for More Important Things
Let us write or edit the essay on your topic "Law case" with a personal 20% discount.
GRAB THE BEST PAPER

Let us find you another Essay on topic Law case for FREE!