Comments (0)
Add to wishlistDelete from wishlist
Cite this document
Summary
The title of the research is initially drafted as: Ways of prevention of illegal publishing of photographs on the internet. In particular, the research will aim at the infringement of the copyright law in the World Wide Web and finding out ways to protect the illegal publishing of pictures clicked by photographers on the internet…
Download full paperFile format: .doc, available for editing
HIDE THIS PAPERGRAB THE BEST PAPER97.1% of users find it useful 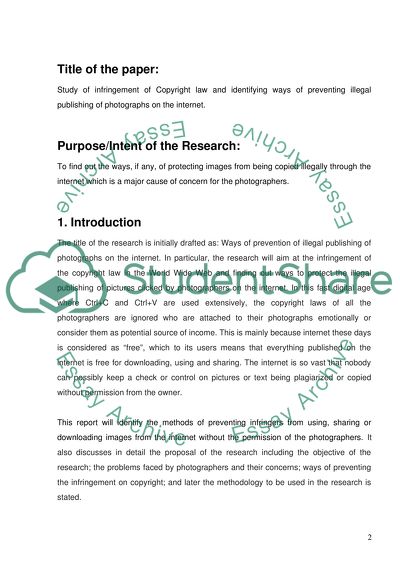 Download file to see previous pages The internet is so vast that nobody can possibly keep a check or control on pictures or text being plagiarized or copied without permission from the owner.
This report will identify the methods of preventing infringers from using, sharing or downloading images from the internet without the permission of the photographers. It also discusses in detail the proposal of the research including the objective of the research; the problems faced by photographers and their concerns; ways of preventing the infringement on copyright; and later the methodology to be used in the research is stated.
This has a great relevance in the present scenario since the World Wide Web is threatened by excessive illegal use of photographs, write-ups, designs etc by uncountable number of users. The exclusivity of such works of creativity is at stake due to people who steal it for their own vested interest, depriving the owner from his rights of selling his original work. Though it's practically impossible to find out or keep a tab on sharing or usage of such works without permission, the research will definitely focus on aspects that may not be the perfect solution for the problem but a remedy atleast to bring down the practice, if not curb it completely.
In the moder
2. Research Questions
The research questions for this study will be:
a) Do photographers have a copyright on their pictures
b) How can photographers protect their rights
c) What are the different types of infringements
d) What are the various method of protecting images from being copied illegally
3. Literature Review
'The obvious problem arises when people say 'if something is on the net, then it must be free'. You can download photographs very easily'.
Patricia L. Baade (1996-1997)
In the modern world, with the advances of the technology, the infringement of copyright law is taking place not only in the real life but in the World Wide Web as well. In comparison with the real life, where infringing materials can be destroyed and their authors punished, the internet cannot be shut down. Therefore, it is often used for illegal purposes. The materials infringed can be of various characters: be it musical files, films, sound recording or photographs. This research paper will focus on one type of the works, namely works of photographers.
A lot of research has been done on this subject in the past since there is a great concern among the photographers that with the development of Internet and other technology it would be very hard to control the ways their works are being published. Anybody and everybody in the present scenario feels free to download and ...Download file to see next pagesRead More
Share:
Tags
Cite this document
(“Copyright Law Essay Example | Topics and Well Written Essays - 2000 words”, n.d.)
Retrieved from https://studentshare.org/miscellaneous/1531339-copyright-law

CHECK THESE SAMPLES OF Copyright Law

7 Pages(1750 words)Case Study
sponsored ads
Save Your Time for More Important Things
Let us write or edit the essay on your topic "Copyright Law" with a personal 20% discount.
GRAB THE BEST PAPER

Let us find you another Essay on topic Copyright Law for FREE!