Comments (0)
Add to wishlistDelete from wishlist
Cite this document
Summary
The present Chinatown in Soho has been established in 1970's in a previously multicultural area with few ethnocentric connotations, in a broader vicinity of Gerrard Street. For a considerable time before that point, the area has been dominated by businesses of a similar nature as are these that are found there at present, albeit not ethnically or racially profiled…
Download full paperFile format: .doc, available for editing
HIDE THIS PAPERGRAB THE BEST PAPER99% of users find it useful 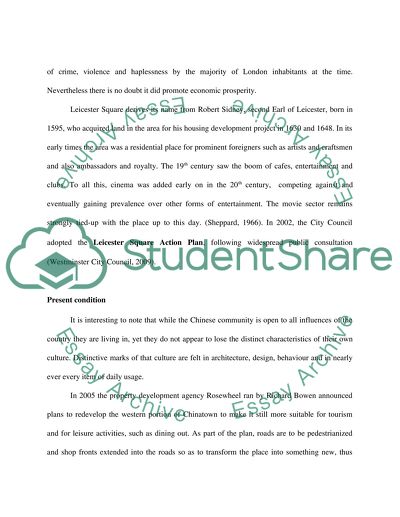 Download file to see previous pages Over time, the larger part of the Chinese minority in London came to be concentrated in the Limehouse district, in an area known as Chinatown these days. Swarming with gambling dens and opium dens, it used to be perceived as a place with high rates of crime, violence and haplessness by the majority of London inhabitants at the time. Nevertheless there is no doubt it did promote economic prosperity.
Leicester Square derives its name from Robert Sidney, second Earl of Leicester, born in 1595, who acquired land in the area for his housing development project in 1630 and 1648. In its early times the area was a residential place for prominent foreigners such as artists and craftsmen and also ambassadors and royalty. The 19th century saw the boom of cafes, entertainment and clubs. To all this, cinema was added early on in the 20th century, competing against and eventually gaining prevalence over other forms of entertainment. The movie sector remains strongly tied-up with the place up to this day. (Sheppard, 1966). In 2002, the City Council adopted the Leicester Square Action Plan, following widespread public consultation (Westminster City Council, 2009).
Present condition
It is interesting to note that while the Chinese community is open to all influences of the country they are living in, yet they do not appear to lose the distinct characteristics of their own culture. Distinctive marks of that culture are felt in architecture, design, behaviour and in nearly ever every item of daily usage.
In 2005 the property development agency Rosewheel ran by Richard Bowen announced plans to redevelop the western portion of Chinatown to make it still more suitable for tourism and for leisure activities, such as dining out. As part of the plan, roads are to be pedestrianized and shop fronts extended into the roads so as to transform the place into something new, thus bringing another kind of businesses into the picture. As is apparent from their reactions, the present property owners and tenants in the area feel strongly opposed to the prospected changes, as some of them would get evicted, while others fear the expected rise of rent in the area. Approximately 20 local businesses are going to close and 200 people lose their jobs in the process. That is why the Chinese community took defensive action, citing community figurehead Jabez Lam on their website, who says he believes that "Rosewheel is determined to put hundreds of shopkeepers and employees out of work. [The redevelopment] will break up the social fabric of those working, living and visiting the area." (DimSum, 2009).
Chinatown derives substantial benefits from the grey economy, as evidenced by Paul Kingsnorth in his Guardian article:
"Jabez wants to show me something. He walks me around the corner to Gerrard Street, where he points to a dingy staircase. To one side is a red plaque with gold Chinese lettering on it. 'This used to be a brothel,' he says with a slight smile. 'Now ...Download file to see next pagesRead More
Share:
Tags
Cite this document
(“Chinatown and Leicester Square in Light of Ethnographic Analysis Essay”, n.d.)
Chinatown and Leicester Square in Light of Ethnographic Analysis Essay. Retrieved from https://studentshare.org/miscellaneous/1529357-chinatown-and-leicester-square-in-light-of-ethnographic-analysis

“Chinatown and Leicester Square in Light of Ethnographic Analysis Essay”, n.d. https://studentshare.org/miscellaneous/1529357-chinatown-and-leicester-square-in-light-of-ethnographic-analysis.
Comments (0)
Click to create a comment or rate a document

It was in the 1990s that the world began to hear serious warnings on global warming and climate change. The summary for policymakers prepared as part of the first assessment report by the Intergovernmental Panel on Climate Change was the first-ever in-depth study on this topic (Houghton, Jenkins and Ephirams, 1990). This report explored climate change and stumbled upon revolutionary revelations. This study announced in very clear terms that there is a natur...
6 Pages(1500 words)Literature review

Perhaps one of the most conspicuous aspects of CNN is that it has an excellent contact network and reporters on the spo...
8 Pages(2000 words)Case Study
sponsored ads
Save Your Time for More Important Things
Let us write or edit the essay on your topic "Chinatown and Leicester Square in Light of Ethnographic Analysis" with a personal 20% discount.
GRAB THE BEST PAPER

Let us find you another Essay on topic Chinatown and Leicester Square in Light of Ethnographic Analysis for FREE!