Comments (0)
Add to wishlistDelete from wishlist
Cite this document
Summary
As President of Peru in the 1990s, Alberto Fujimori took what are admittedly extreme measures to fix the Peruvian economy and to eliminate the threat of terrorism in Peru. During a so-called "self-coup" in 1992, Fujimori dissolved the Peruvian Congress, dismissed the judiciary, and suspended the civil liberties of Peruvian citizens (Conaghan, 1995)…
Download full paperFile format: .doc, available for editing
HIDE THIS PAPERGRAB THE BEST PAPER96.8% of users find it useful 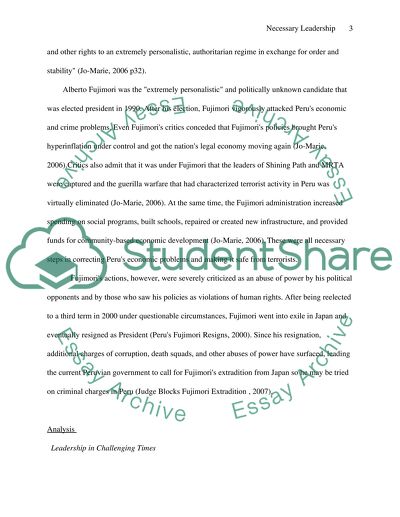 Download file to see previous pages When Alberto Fujimori was elected President of Peru in 1990, the country was suffering from massive external debt which could not be paid, uncontrolled hyperinflation, non-existent international reserves, and food shortages (The World Bank, 1997). Basic government services like education, health, and basic infrastructure had been neglected and were eroding away. The government was perceived as weak, and two terrorists groups, Shining Path (Sendero Luminoso) and the MRTA (Movimiento Revolucionario Tupac Amaru), were competing for control of the country. Both of these groups had formed alliances with Peruvian drug dealers. Violence and intimidation were common, and law-biding Peruvians were very afraid of what the future might hold for their country and their lives. As one commentator noted, "The intense violence of the 1980s created a content in which many Peruvians were willing to cede citizenship and other rights to an extremely personalistic, authoritarian regime in exchange for order and stability" (Jo-Marie, 2006 p32).
Alberto Fujimori was the "extremely personalistic" and politically unknown candidate that was elected president in 1990. After his election, Fujimori vigorously attacked Peru's economic and crime problems. Even Fujimori's critics conceded that Fujimori's policies brought Peru's hyperinflation under control and got the nation's legal economy moving again (Jo-Marie, 2006).Critics also admit that it was under Fujimori that the leaders of Shining Path and MRTA were captured and the guerilla warfare that had characterized terrorist activity in Peru was virtually eliminated (Jo-Marie, 2006). At the same time, the Fujimori administration increased spending on social programs, built schools, repaired or created new infrastructure, and provided funds for community-based economic development (Jo-Marie, 2006). These were all necessary steps in correcting Peru's economic problems and making it safe from terrorists.
Fujimori's actions, however, were severely criticized as an abuse of power by his political opponents and by those who saw his policies as violations of human rights. After being reelected to a third term in 2000 under questionable circumstances, Fujimori went into exile in Japan and eventually resigned as President (Peru's Fujimori Resigns, 2000). Since his resignation, additional charges of corruption, death squads, and other abuses of power have surfaced, leading the current Peruvian government to call for Fujimori's extradition from Japan so he may be tried on criminal charges in Peru (Judge Blocks Fujimori Extradition , 2007).
Analysis
Leadership in Challenging Times
Any reasonably competent elected official can lead during times of peace and economic prosperity, when the only real duty of government is simply not to do anything that would interfere with economic growth or destabilize the peace. Effective leaders can make the most of these opportunities; ineffective leaders allow circumstances to erode and lose the gains that were made during prosperous times.
As noted above, Fujimori came into power at a time when Peru was enjoying neither peace nor economic success. Data from public opinion polls ...Download file to see next pagesRead More
Share:
Tags
Cite this document
(“Necessary Leadership Alberto Fujimori Essay Example | Topics and Well Written Essays - 2000 words”, n.d.)
Retrieved from https://studentshare.org/miscellaneous/1529229-necessary-leadership-alberto-fujimori

Once a manager decides on something, his subordinates are required to follow whatever he tells them or else he would have to use the power and authority vested in him to reprimand those who go against his directives. Managers are not their own bosses and as such, they are motivated by the salaries which they are paid for their services. This also makes them subordinates who follow orders from their bosses and who hold them accountable for the progress or failure of the business. Management is a process that focuses on ensuring that there is stability in the organization as well as proper utilization of resources in order to create a harmonious environment for maximizing profits while also minimizing risks, which is the overall sen...
6 Pages(1500 words)Literature review
sponsored ads
Save Your Time for More Important Things
Let us write or edit the essay on your topic "Necessary Leadership Alberto Fujimori" with a personal 20% discount.
GRAB THE BEST PAPER

Let us find you another Essay on topic Necessary Leadership Alberto Fujimori for FREE!