Comments (0)
Add to wishlistDelete from wishlist
Cite this document
Summary
The social impact of tourism may be the by-product of the outcome on host communities of direct and indirect interaction of tourists and of the reciprocated interface derived from tourism industry. There are several reasons that attribute to the host communities to play a weaker role in the sense of interaction with their guests and service providers, by virtue of producing counter-influence…
Download full paperFile format: .doc, available for editing
HIDE THIS PAPERGRAB THE BEST PAPER92.7% of users find it useful 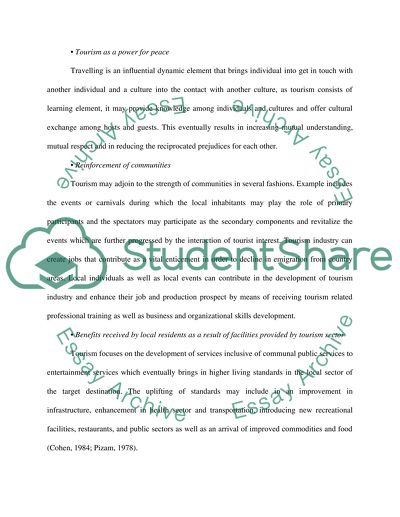 Download file to see previous pages In addition to the misrepresentation of identity, changes may occur in community structure, family relationships, shared customary life styles, services and ethics (Din, 1988). Tourism can cause positive social impact as well by means of supporting for peace, promoting cultural traditions and helping circumvent urban repositioning by creating local jobs. Socio-cultural impact becomes indistinct when various cultures meet at the single point of intersection as it may be perceived by some of the groups as positive whereas it may be perceived as negative by some of the groups as well. This paper aims at finding out the social impacts of tourism.
Tourism has positive impact on environmental condition. Tourism has the capability to encourage social development by virtue of employment creation, capital distribution and poverty mitigation (web link 6).
Travelling is an influential dynamic element that brings individual into get in touch with another individual and a culture into the contact with another culture, as tourism consists of learning element, it may provide knowledge among individuals and cultures and offer cultural exchange among hosts and guests. This eventually results in increasing mutual understanding, mutual respect and in reducing the reciprocated prejudices for each other.
- Reinforcement of communities
Tourism may adjoin to the strength of communities in several fashions. Example includes the events or carnivals during which the local inhabitants may play the role of primary participants and the spectators may participate as the secondary components and revitalize the events which are further progressed by the interaction of tourist interest. Tourism industry can create jobs that contribute as a vital enticement in order to decline in emigration from country areas. Local individuals as well as local events can contribute in the development of tourism industry and enhance their job and production prospect by means of receiving tourism related professional training as well as business and organizational skills development.
- Benefits received by local residents as a result of facilities provided by tourism sector
Tourism focuses on the development of services inclusive of communal public services to entertainment services which eventually brings in higher living standards in the local sector of the target destination. The uplifting of standards may include in an improvement in infrastructure, enhancement in health sector and transportation, introducing new recreational facilities, restaurants, and public sectors as well as an arrival of improved commodities and food (Cohen, 1984; Pizam, 1978).
- Revaluation of culture and traditions
Tourism can enhance the safeguarding and conduction of cultural and historical practices, by means of contributing to the preservation and prolonged management of natural possessions, the conservation of local traditions, as well as a revolution of aboriginal culture, arts and crafts.
- Encouragement of civic involvement and pride
Tourism has a great impact in raising mass awareness about natural resources and its financial value as well as about cultural significance. Additionally, it may also arouse a feeling of pride in local and national traditions and may encourage ...Download file to see next pagesRead More
Share:
Tags
Cite this document
(“Social Impact of Tourism Essay Example | Topics and Well Written Essays - 1500 words”, n.d.)
Social Impact of Tourism Essay Example | Topics and Well Written Essays - 1500 words. Retrieved from https://studentshare.org/miscellaneous/1529178-social-impact-of-tourism

CHECK THESE SAMPLES OF Social Impact of Tourism

Soon a retail industry was built up and the community began to grow and is considered to be a society with a civic nature (Learning Communities in Education and Training, 2009). The community of Broken Hill can be considered to be highly diverse with a census that was conducted in the area in 1996 showed that out of the then population there were 961 people who came from overseas and a large amount of those was not from an English speaking nation. The large composition of the population in the community at the time was aboriginals or Torres Strait Islanders. Broken Hill thus shows a varying ethnic community and a diverse mindset considering a large proportion of the people are from nations such as Greece, Malta and even Italy (Lea...
6 Pages(1500 words)Case Study
sponsored ads
Save Your Time for More Important Things
Let us write or edit the essay on your topic "Social Impact of Tourism" with a personal 20% discount.
GRAB THE BEST PAPER

Let us find you another Essay on topic Social Impact of Tourism for FREE!