Comments (0)
Add to wishlistDelete from wishlist
Cite this document
Summary
'It may be said that any theory of criminal punishment leads to a requirement of some kind of mens rea. The deterrent theory is workable only if the culprit has knowledge of the legal sanction; and if a man does not foresee the consequence of his act he cannot appreciate that punishment lies in store for him if he does it…
Download full paperFile format: .doc, available for editing
HIDE THIS PAPERGRAB THE BEST PAPER94.3% of users find it useful 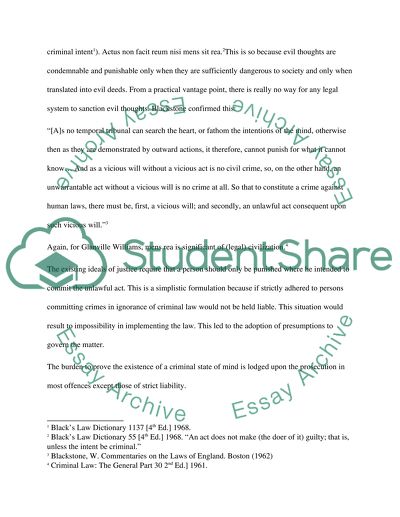 Download file to see previous pages The topic statement is lifted from Glanville Williams Criminal Law: The General Part [2nd ed. 1961]. A perusal of the topic shows that it runs counter to another statement in the same text which shows the belief of the author that the concept of mens rea is an index of maturity of our legal system. The correlation to the various justifications of punishment or purposes of criminalization does not at all compute when considered from the various vantage points and time frames of the said justification theories. The mental element of crime may be significant for one purpose or the other but the same way that the various purposes do not conjoin with any one crime, the element of mens rea will not be relevant to all the justifications and purposes.
The cardinal principle of criminal law is that 'a wrongful act does not make a person guilty unless his mind is legally blameworthy.' There must not only be a wrongful act (actus reus), but with it must also concur intent (mens rea, Latin: the guilty mind; a guilty or wrongful purpose; a criminal intent1). Actus non facit reum nisi mens sit rea.2This is so because evil thoughts are condemnable and punishable only when they are sufficiently dangerous to society and only when translated into evil deeds. From a practical vantage point, there is really no way for any legal system to sanction evil thoughts. Blackstone confirmed this:
"
"[A]s no temporal tribunal can search the heart, or fathom the intentions of the mind, otherwise then as they are demonstrated by outward actions, it therefore, cannot punish for what it cannot know And as a vicious will without a vicious act is no civil crime, so, on the other hand, an unwarrantable act without a vicious will is no crime at all. So that to constitute a crime against human laws, there must be, first, a vicious will; and secondly, an unlawful act consequent upon such vicious will."3
Again, for Glanville Williams, mens rea is significant of (legal) civilization.4
The existing ideals of justice require that a person should only be punished where he intended to commit the unlawful act. This is a simplistic formulation because if strictly adhered to persons committing crimes in ignorance of criminal law would not be held liable. This situation would result to impossibility in implementing the law. This led to the adoption of presumptions to govern the matter.
The burden to prove the existence of a criminal state of mind is lodged upon the prosecution in most offences except those of strict liability.
Mens rea does not mean 'wickedness' in any moral or general sense.5 On the other hand, good motive does not provide defence to what is otherwise criminal.6
Mens rea is a legal jargon that refers to a number of states of mind that the law treats as criminal, each of which is related to or accompanies the ingredient of the actus reus of the offence. This concurrence is what gives rise to criminal liability. These states of mind that are relevant to establishing criminal liability are: 1) intention, 2) recklessness and 3) gross negligence about consequences and they represent the fault element of crime. Knowledge of the surrounding circumstances may form part of the mens rea.
Not every ingredient of actus reus of a statutory offence has a mens rea counterpart; ...Download file to see next pagesRead More
Share:
Tags
Cite this document
(“Criminal Law Mens Rea Essay Example | Topics and Well Written Essays - 2500 words”, n.d.)
Criminal Law Mens Rea Essay Example | Topics and Well Written Essays - 2500 words. Retrieved from https://studentshare.org/miscellaneous/1528519-criminal-law-mens-rea

Some of the more important rights bestowed upon employees by the employment law are the right to claim wrongful or unfair dismissal and payment for redundancy. Other legislation, such as the health and safety statute and the insolve...
7 Pages(1750 words)Case Study
sponsored ads
Save Your Time for More Important Things
Let us write or edit the essay on your topic "Criminal Law Mens Rea" with a personal 20% discount.
GRAB THE BEST PAPER

Let us find you another Essay on topic Criminal Law Mens Rea for FREE!