Comments (1)
Add to wishlistDelete from wishlist
Cite this document
Summary
Below follows a group works assignment in which we are deemed to discuss the circumstances under which the veil of incorporation can be lifted by a court. The importance of group work compared to individual work as well as the benefits that are associated with presentation are also discussed…
Download full paperFile format: .doc, available for editing
HIDE THIS PAPERGRAB THE BEST PAPER95.1% of users find it useful 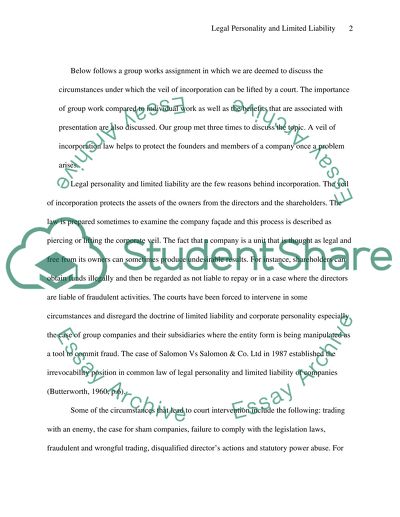 Download file to see previous pages The law is prepared sometimes to examine the company faade and this process is described as piercing or lifting the corporate veil. The fact that a company is a unit that is thought as legal and free from its owners can sometimes produce undesirable results. For instance, shareholders can obtain funds illegally and then be regarded as not liable to repay or in a case where the directors are liable of fraudulent activities. The courts have been forced to intervene in some circumstances and disregard the doctrine of limited liability and corporate personality especially the case of group companies and their subsidiaries where the entity form is being manipulated as a tool to commit fraud. The case of Salomon Vs Salomon & Co. Ltd in 1987 established the irrevocability position in common law of legal personality and limited liability of companies (Butterworth, 1960, p.6).
Some of the circumstances that lead to court intervention include the following: trading with an enemy, the case for sham companies, failure to comply with the legislation laws, fraudulent and wrongful trading, disqualified director's actions and statutory power abuse. For instance if a company is a sham one i.e. formed to enable one avoid obligations such as tax, the court may act to ignore the company's existence.
In case the court discovers that a fraud is committed, it is prep...
The fraud will notably be a case where a company owner used the company intentionally to deny his creditors their legal rights. It discourages Solomon principle to act as a vehicle of fraud. The exemption which illustrates fraud are found in Gilford Motor Ltd Vs Jones Lipman. In this case, Mr. Horne who was as ex -employee of the company incorporated another limited company in his spouse's name. In so doing, he solicited the clients of Gilford Motor ltd as his employment contract held it clear that he cannot solicit customers of the organization. The court held that the company's idea behind its formation was to commit fraud and to mask Mr. Hornes' effective continuation of the business. The court held that it was a sham to mask his wrongdoings as it was very clear that the objective of incorporating that company was to commit fraud. The court at it discretion may impose liability on people liable for carrying out the business with an intention of defrauding the creditors at the winding up of the business. The directors are also liable if they sign a cherub or a bill of exchange on company's behalf and fail to include the company's name, omits a word or writes it incomplete (Oliver, 1971, p.66).
Common law provides for separate legal entity of a company and the court disregarded this legal personality and instead has investigated the shareholders personal quality or those who usually controls the company. The reason behind this is because it is the public interest to make sure that the company is not run by an undesirable person and that it is not under any criminal element.
Trading with an enemy especially during the time of war is another instance that leads to lifting of the veil of incorporation. In Daimler Company ...Download file to see next pagesRead More
Share:
Tags
Cite this document
(“Legal Personality and Limited Liability Essay Example | Topics and Well Written Essays - 1000 words”, n.d.)
Legal Personality and Limited Liability Essay Example | Topics and Well Written Essays - 1000 words. Retrieved from https://studentshare.org/miscellaneous/1528511-legal-personality-and-limited-liability

co
corwinrick added comment 1 year ago
Student rated this paper as
I had an issue with a essay types of works. All until I came across this website and this particular document. Even though "Legal Personality and Limited Liability" is far from my interests, the structure is so great that I use it all the time as an example for my own works.

CHECK THESE SAMPLES OF Legal Personality and Limited Liability

Motivation is one of the most frequently researched topics in organizational behavior. Motivation can be defined as “the processes that account for an individual’s intensity, direction, and persistence of effort toward attaining a goal”Motivated individuals stay with a task long enough to achieve their goal. Process of Motivation start from Needs (desires or wants), Drive / goal directed behavior, Goal and incentives / reliefs. Basically if individuals need for achievement, need for power and need for affiliation fulfills, then a person may be motivated and persistently work to achieve the goals (McClelland, 1961). Persons will be motivated enough to exert a high level of effort and goal directed behavior if he o...
14 Pages(3500 words)Assignment

Fundamental Difference between a Partnership, a LLP and a Private Limited Company

An unqualified form of partnership places the entire burden of business liability on the partners of the firm. On the other Limited Liability Partnership (LLP) and a Private Limited Company do not impose as much liability as the Partnership does.

An LLP is almost similar to a standard form of a partnership without unlimited liabilities on the partners. Partners’ liabilities are differently prescribed in that liability caused by any error of one partner need not affect the other partners. State registration is required but some of the states stipulate that partners should take liability insurance or has adequate assets to meet likely claims. This is very much applicable to firms of professionals like account...
13 Pages(3250 words)Term Paper

The simple ideology is embraced by some but the arguments are flawed when the realities of abortion are examined. Studies have shown that most women are coerced into committing this murderous act of a living human and that there is no such thing as safe abortions as many are led to believe. Pro-abortion proponents generally espouse that the rights of a non-living tissue that feels no pain are non-existent. These untruths have been widely perceived as facts. In addition, the Founding Fathers of this nation intended to shape not only the legal but the moral direction of American society as well when they drafted the Constitution, the document that defines the laws of the nation. If they were alive today, the Founders clearly would b...
8 Pages(2000 words)Coursework
sponsored ads
Save Your Time for More Important Things
Let us write or edit the essay on your topic "Legal Personality and Limited Liability" with a personal 20% discount.
GRAB THE BEST PAPER

Let us find you another Essay on topic Legal Personality and Limited Liability for FREE!