Comments (0)
Add to wishlistDelete from wishlist
Cite this document
Summary
North Korea has recently attracted the world's attention due to its claims of pursuing nuclear weapons technology. Apparent tests of nuclear devices have riveted the world's attention whilst their leader, Kim Jong Il, threatens peace in the region and the world…
Download full paperFile format: .doc, available for editing
HIDE THIS PAPERGRAB THE BEST PAPER98.7% of users find it useful 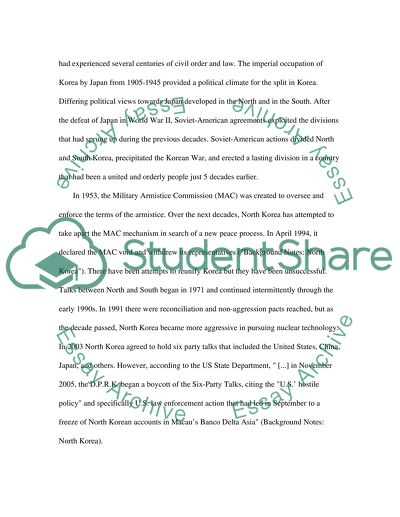 Extract of sample "North Korea: No Clear Motive and No Clear Solution"

Download file to see previous pages The outrageous public demands and threats by a nation half the size of Great Britain and less than one-third of its population can still command the world's attention. The question is not how, but why they would seek to isolate themselves, create international tensions, and ignore the welfare of their people in the face of current international pressure.
To begin to understand North Korea's motives and possible solutions, it's helpful to gain a brief history of the nation. The Korean peninsula has a rich history as a unified nation dating back several centuries. Until the Japanese Imperialism that began at the beginning of the 20th century, Korea was a country that was unified by tradition, language, and ethnicity. Its borders reflected the single ethnic population and the Koreans had experienced several centuries of civil order and law. The imperial occupation of Korea by Japan from 1905-1945 provided a political climate for the split in Korea. Differing political views towards Japan developed in the North and in the South. After the defeat of Japan in World War II, Soviet-American agreements exploited the divisions that had sprung up during the previous decades. Soviet-American actions divided North and South Korea, precipitated the Korean War, and erected a lasting division in a country that had been a united and orderly people just 5 decades earlier.
In 1953, the Military Armistice Commission (MAC) was created to oversee and enforce the terms of the armistice. Over the next decades, North Korea has attempted to take apart the MAC mechanism in search of a new peace process. In April 1994, it declared the MAC void and withdrew its representatives ("Background Notes: North Korea"). There have been attempts to reunify Korea but they have been unsuccessful. Talks between North and South began in 1971 and continued intermittently through the early 1990s. In 1991 there were reconciliation and non-aggression pacts reached, but as the decade passed, North Korea became more aggressive in pursuing nuclear technology. In 2003 North Korea agreed to hold six party talks that included the United States, China, Japan, and others. However, according to the US State Department, " [...] in November 2005, the D.P.R.K. began a boycott of the Six-Party Talks, citing the "U.S.' hostile policy" and specifically U.S. law enforcement action that had led in September to a freeze of North Korean accounts in Macau's Banco Delta Asia" (Background Notes: North Korea).
There is a stark contrast between North and South Korea today. Though both nations are of similar size and geography, South Korea has a per capita income that is 15 times that of North Korea ("Background Note: South Korea"). North Korea dogmatically pursues a Communistic ideology in a world that is changing around it. North Korea's gross national income is less than $1,000 per capita and makes it one of the poorest nations in the world. South Korea is a modern industrialised democracy while the North is agrarian and living on the barest of subsistence. The political ideology of Communism may be one explanation, but their economy also suffers from over burdened military spending.
North Korea's commitment to military spending cannot be overestimated. Their dedication to an aggressive military posture is noted in a North Korean news release that proclaims, "The single-minded unity of the DPRK in the Songun era represents an indestructible harmonious whole in which ...Download file to see next pagesRead More
Share:
Tags
Cite this document
(“North Korea: No Clear Motive and No Clear Solution Essay”, n.d.)
North Korea: No Clear Motive and No Clear Solution Essay. Retrieved from https://studentshare.org/miscellaneous/1528421-north-korea-no-clear-motive-and-no-clear-solution

“North Korea: No Clear Motive and No Clear Solution Essay”, n.d. https://studentshare.org/miscellaneous/1528421-north-korea-no-clear-motive-and-no-clear-solution.
Comments (0)
Click to create a comment or rate a document

CHECK THESE SAMPLES OF North Korea: No Clear Motive and No Clear Solution

Their tariffs were decided to be removed within a period of time of 5 to 15 years. With Canada, all the agreements that were signed regarding trade and agriculture were included in this agreement (United States Department of Agriculture). In short, the three countries, after signing the agreement, we're able to buy, sell and invest in international markets and institutions...
10 Pages(2500 words)Report

An organization uses an efficient code of ethics for many purposes: although two important ones are: A code of ethics should 1) explain gray areas or queries employees have regarding organizational principles and opportunists and 2) assist in building confidence and dedication (Kenneth, 1998).
Codes of ethics are considered to increase ethical potential, Legitimize discussion regarding ethical matters, support ethical judgment, and stay away from bad behavior supply a foundation for enforcement, responsibility and accountability provisions (Akula, 2000).
One thing that differs for IT professionals, though, is the amount and multiplicity of codes of conduct that the IT professional may pass on to in their attempt to achie...
13 Pages(3250 words)Assignment

...The Virtual Office Work as a Solution to Work ad Life Imbalances al Affiliation) Introduction Work life balance in our present society has proven to be very elusive, which has led some commentators comparing it to the myth. It is widely held that, the only way that a person can achieve balance between performing his/her work and having an active social life is through consciously making decisions that facilitate a person to pursue opportunities that are more preferable and within his /her frame of balance. This is in stark contrast to merely following avenues and reacting to emergencies as most people do. By deliberately choosing a path that one feels doesnt infringe too much on his social life, an individual may begin to strike a balance...
6 Pages(1500 words)Literature review
sponsored ads
Save Your Time for More Important Things
Let us write or edit the essay on your topic "North Korea: No Clear Motive and No Clear Solution" with a personal 20% discount.
GRAB THE BEST PAPER

Let us find you another Essay on topic North Korea: No Clear Motive and No Clear Solution for FREE!