Comments (0)
Add to wishlistDelete from wishlist
Cite this document
Summary
The most stereotyped impression of a country where more than one language is spoken is that, the multilingual country could be marked with chaos and confusion. However, far from being chaotic and confusing, nations in which more than one language is spoken do not share similar patterns with regards political and economic situation as these patterns are too intricate to establish…
Download full paperFile format: .doc, available for editing
HIDE THIS PAPERGRAB THE BEST PAPER96.2% of users find it useful 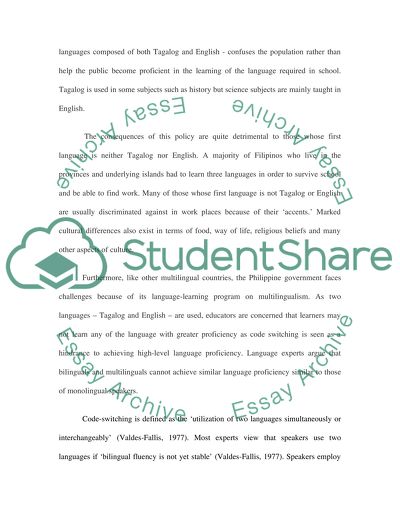 Download file to see previous pages Furthermore, code switching is a very common behavior among multilingual speakers. Thus, policymakers on education stress that switching from one language to another may affect proficiency of the speaker as code switching limit language development of the speaker or learner (Berko-Gleason 1993).
The multilingual situation in the Philippines, for instance, presents an interesting case as the country is an archipelago and is made up of many islands. English is a second language in the Philippines and about 50 percent of the population comprehend and speak English but 87 languages and dialects also exist in different islands. Some of these languages do not seem to be related to each other. Although a national language exists, government policies on the use of national language, the Filipino - an amalgamation of languages composed of both Tagalog and English - confuses the population rather than help the public become proficient in the learning of the language required in school. Tagalog is used in some subjects such as history but science subjects are mainly taught in English.
The consequences of this policy are quite detrimental to those whose first language is neither Tagalog nor English. A majority of Filipinos who live in the provinces and underlying islands had to learn three languages in order to survive school and be able to find work. Many of those whose first language is not Tagalog or English are usually discriminated against in work places because of their 'accents.' Marked cultural differences also exist in terms of food, way of life, religious beliefs and many other aspects of culture.
Furthermore, like other multilingual countries, the Philippine government faces challenges because of its language-learning program on multilingualism. As two languages - Tagalog and English - are used, educators are concerned that learners may not learn any of the language with greater proficiency as code switching is seen as a hindrance to achieving high-level language proficiency. Language experts argue that bilinguals and multilinguals cannot achieve similar language proficiency similar to those of monolingual speakers.
Code-switching is defined as the 'utilization of two languages simultaneously or interchangeably' (Valdes-Fallis, 1977). Most experts view that speakers use two languages if 'bilingual fluency is not yet stable' (Valdes-Fallis, 1977). Speakers employ this method in order to attain two things: one is for the speaker to fill a linguistic or conceptual gap and secondly, it is for the attainment of multiple communicative functions (Gysels, 1992). In many countries and territories, code switching is avoided, but in majority of multilingual and bilingual areas of the world, it is viewed as the 'norm' (Swigart, 1992; Goyvaerts & Zembele, 1992). This is true in the Philippines, Singapore, India and Nepal where speakers usually move from one language to another to communicate. In Singapore and the Philippines (Chinese or Malay and English in Singapore, and Tagalog and English in the Philippines), the use of two languages or the mixing of both in communication and even in literature has become the norm.
Views on code ...Download file to see next pagesRead More
Share:
Tags
Cite this document
(“Language Essay Example | Topics and Well Written Essays - 750 words - 1”, n.d.)
Language Essay Example | Topics and Well Written Essays - 750 words - 1. Retrieved from https://studentshare.org/miscellaneous/1528411-language

CHECK THESE SAMPLES OF Language

Skinner and many others. From their theories and arguments (Avram) Noam Chomsky, an American linguist and educator, as well as political activist, came up with his own views and theories which rejected, accepted and added depth in the study of language revolutionizing linguistics.
Today, English is known to be the universal language. To be at par with the rest of the world and to be able to compete and join the bandwagon of technology and business, even professionals of different nationalities study language without so much of a difficulty.
The paper consists of discussions on Chomsky’s view on Language Development focusing more on what is called the “universal grammar” comparing it with the theories of...
6 Pages(1500 words)Assignment

... disability to be of any diagnostic value. Definitional and research efforts should focus on the seven domains mentioned by Wong, for example, receptive language (listening), expressive language (speaking), basic reading skills, reading comprehension, written expression, mathematics calculation, and mathematical reasoning. A clear definition cannot be achieved by lumping them together because of the heterogeneity and complexity of each category. Also, explicit diagnostic criteria for each of the seven specific disability domains will make it easier to operationalize the definitions for example, in the area of disability in basic reading skills. Ultimately, much effort is needed to improve identification, which in turn, will lead to specific...
10 Pages(2500 words)Case Study

..., but what if scientific advancements prove that they are actually three stars -- then meaning is displaced. On a smaller scale, Referential Theory fails to account for the structural differentiations in language (Crick 1976). For instance, is the meaning of ‘je ne sais quoi’ the same as charming in English, and if it isn’t, then referents of referents are required to translate the term. This disrupts the continuity of meaning and questions the nature of objective interpretation. Image Theory While the Referential Theory of meaning can’t define the actual physical extension of imaginary things like ‘moronic plant’, image theory develops a linguistic theory of semantic meaning to help account for such entities. An...
7 Pages(1750 words)Essay

The use of the narrator in the novel helps illustrate sensual, erotic, and heartbreaking moments. To achieve its goal of exploring the acknowledged subject of love, betrayal, beauty, and desire, the author approaches the issues with an overwhelming zeal. Hence, the aim of the study is to evaluate the various techniques used in the two narratives in communicating their notions of the various subjects within the novels.
Acker uses language from other writers; as well, the plot in her fiction employs appropriation, which in return propels appropriation to the extreme since a huge part of her writing integrates texts of fiction from past writers. Blood and Guts in High school deal with the journey of a young lady through a dark w...
8 Pages(2000 words)Literature review
sponsored ads
Save Your Time for More Important Things
Let us write or edit the essay on your topic "Language" with a personal 20% discount.
GRAB THE BEST PAPER

Let us find you another Essay on topic Language for FREE!