Comments (0)
Add to wishlistDelete from wishlist
Cite this document
Summary
Ethics have long been a source for discussion and debate among philosophers, sociologists, and civilians. Everyone seems to know what ethics are, but few can adequately define the term "ethics." This is due to the multitude of sources that ethics can be derived from, including religious beliefs, societal norms, upbringing and background, and personal experiences…
Download full paperFile format: .doc, available for editing
HIDE THIS PAPERGRAB THE BEST PAPER97.5% of users find it useful 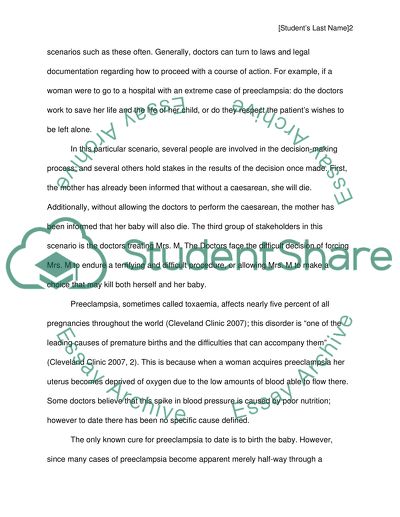 Download file to see previous pages The health care industry is one such organisation that tries to balance individual thought and critical thinking decision-making skills with ethical guidelines set forth via laws, regulations, and company policies.
Every person, regardless of his or her chosen career or lifestyle, will eventually be forced to make a decision in an ethical dilemma. This dilemma may be as simple as whether or not to tell a friend that he or she may be getting laid off from work or as difficult as deciding whether or not a person has the sense and capability of making a decision on his or her own regarding healthcare and treatment. Doctors often face scenarios such as these often. Generally, doctors can turn to laws and legal documentation regarding how to proceed with a course of action. For example, if a woman were to go to a hospital with an extreme case of preeclampsia: do the doctors work to save her life and the life of her child, or do they respect the patient's wishes to be left alone.
In this particular scenario, several people are involved in the decision-making process; and several others hold stakes in the results of the decision once made. First, the mother has already been informed that without a caesarean, she will die. Additionally, without allowing the doctors to perform the caesarean, the mother has been informed that her baby will also die. The third group of stakeholders in this scenario is the doctors treating Mrs. M. The Doctors face the difficult decision of forcing Mrs. M to endure a terrifying and difficult procedure, or allowing Mrs. M to make a choice that may kill both herself and her baby.
Preeclampsia, sometimes called toxaemia, affects nearly five percent of all pregnancies throughout the world (Cleveland Clinic 2007); this disorder is "one of the leading causes of premature births and the difficulties that can accompany them" (Cleveland Clinic 2007, 2). This is because when a woman acquires preeclampsia her uterus becomes deprived of oxygen due to the low amounts of blood able to flow there. Some doctors believe that this spike in blood pressure is caused by poor nutrition; however to date there has been no specific cause defined.
The only known cure for preeclampsia to date is to birth the baby. However, since many cases of preeclampsia become apparent merely half-way through a pregnancy, this may not always prove to be the best or most viable option (Cleveland Clinic 2007). If too early in the pregnancy, some doctors can monitor the baby's health and attempt to let the baby stay in the womb for a longer period of time to develop more fully before being delivered. However, in this particular scenario, allowing the baby to remain inside the mother's womb was not an option. The preeclampsia had already placed both the baby and the soon-to-be mother in danger of losing their lives. Allowing the child to remain inside the mother would surely kill both mother and child.
A caesarean section is a procedure in which doctors can deliver the mother's baby "through an incision made on [her] pregnant belly" (BellyBelly 2007, 1). Essentially, rather than allow the baby to finish developing in the womb and be birthed vaginally, doctors believed that the best way to ensure safe delivery would be to cut ...Download file to see next pagesRead More
Share:
Tags
Cite this document
(“A written analysis of an ethical dilemma in health care ethics Essay”, n.d.)
A written analysis of an ethical dilemma in health care ethics Essay. Retrieved from https://studentshare.org/miscellaneous/1525382-a-written-analysis-of-an-ethical-dilemma-in-health-care-ethics

“A Written Analysis of an Ethical Dilemma in Health Care Ethics Essay”, n.d. https://studentshare.org/miscellaneous/1525382-a-written-analysis-of-an-ethical-dilemma-in-health-care-ethics.
Comments (0)
Click to create a comment or rate a document

...?The Health Care Dilemma On March 23, the Patient Protection and Affordable Care Act or more popularly known as Obamacare was signed by President Barack Obama into law. The healthcare reform was a centerpiece policy of his administration and was vigorously pursued in the first year of his term. The law reported Cornwell “was the biggest overhaul of the US health care system in half a century, reorganizing a $2.5 trn sector that accounts for one sixth of the entire national economy” (2011). Essentially, it nationalized health care, reformed the American private health insurance sector and...
4 Pages(1000 words)Essay

Analysis of an Ethical Dilemma

...be applied to the very same case study or ethical problem, and the result or the outcome decision can be quite different. Thus, one of the areas that I was exposed to in this course, was the area of meta-ethics. That is, the view or analysis of different and competing models for understanding and interpreting ethical decisions or moral dilemmas. ETHICAL DILEMMA: In high-school, I had a job working in a retail store which had a low hourly wage, but a decent commission. My manager at that store, basically taught me that misleading the customer would produce better results. Further, while individuals were compensated for...
8 Pages(2000 words)Assignment

Analysis of an Ethical Dilemma

...?Analysis of an Ethical Dilemma During my second placement in the first year, while working in the antenatal clinic a thirty years old client came for a regular visit. The midwife present at the clinic met her in a very warm manner. The client's pregnancy had entered the 40th week by that time and she was willing to get the baby delivered within the next two days due to reasons of convenience for family event. The midwife who had already examined her and was satisfied with her overall health condition, immediately offered her services for a sweep and told her how expert she was at doing this procedure. Since the client was not willing to undergo IOL, the option of a sweep...
8 Pages(2000 words)Essay

...developing management skills are fostering the use of good practices by my colleagues within the hospital in which I work. Effective care delivery is only possible when quality leadership exists, which in itself supports and encourages the awareness of, and application of, good practices. As nursing differentiates itself from other health delivery services, I can see in my own practice how our unique body of knowledge and methods of providing patient care necessitate the development of clinical decision-making processes. My dilemma brought home to me the importance of both theoretical and practical knowledge, as conflicts of interests and ethical...
6 Pages(1500 words)Essay

...Building an Ethical Health Care Organization Prepared by: Prepared for: Building an Ethical Health Care Organization Introduction: Being a director of a newly set up company implies many responsibilities in terms of the company's growth, establishing its reputation in the market, acquiring new clients, etc. As a newly built company, a lot of work requires to be done to ensure that the company is not only able to survive the global competition but grow rapidly to build a name for itself in the market. I have also been appointed as a director of one such recently set-up health care company- EDS. The...
10 Pages(2500 words)Case Study

A written analysis of an ethical dilemma in health care ethics

...dilemma. The health care industry is one such organisation that tries to balance individual thought and critical thinking decision-making skills with ethical guidelines set forth via laws, regulations, and company policies. Every person, regardless of his or her chosen career or lifestyle, will eventually be forced to make a decision in an ethical dilemma. This dilemma may be as simple as whether or not to tell a friend that he or she may be getting laid off from work or as difficult as deciding whether or not a person has the sense and capability of making a decision on his or her own regarding healthcare and...
10 Pages(2500 words)Essay

A written analysis of the ethical dilemma

...A written analysis of the ethical dilemma Introduction: Ethics and morality are considered as foundations of governing the life of an individual, and on a greater plain, it plays a very crucial part in determining the nature of social or community life. The cosmopolitan and multicultural existence in the modern context has made the course of life so diverse that it has really become tough, both at scholarly and individual level, to determine a proper guideline for what is moral or ethical and what is against such approaches. Reflection of this dilemma is also largely reflected in professional arena, especially in the...
12 Pages(3000 words)Essay

2 Pages(500 words)Assignment
sponsored ads
Save Your Time for More Important Things
Let us write or edit the essay on your topic "A written analysis of an ethical dilemma in health care ethics" with a personal 20% discount.
GRAB THE BEST PAPER

Let us find you another Essay on topic A written analysis of an ethical dilemma in health care ethics for FREE!