Comments (0)
Add to wishlistDelete from wishlist
Cite this document
Summary
I like working on projects on your own is another point cited by this survey And I often prefer to learn by trial and error. Effective techniques to enhance my learning include keeping a journal and giving myself time to reflect on new ideas and information…
Download full paperFile format: .doc, available for editing
HIDE THIS PAPERGRAB THE BEST PAPER92.4% of users find it useful 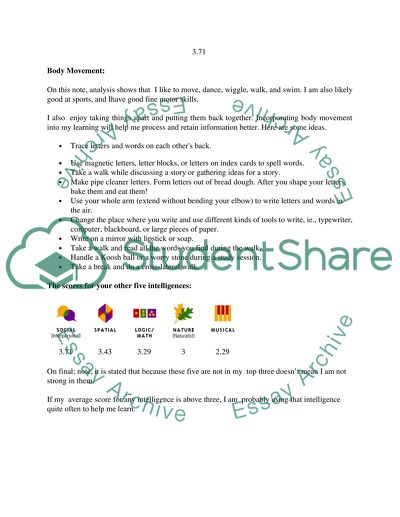 Multiple Intelligences Multiple Intelligence The Analysis of the Survey Self: The survey showas that I have a very good sense of self amnd while I like to spend time and think things over.
It is noted also that Il often take in information from another person, mull it over, and come back to that person later to discuss it.
I like working on projects on your own is another point cited by this survey And I often prefer to learn by trial and error. Effective techniques to enhance my learning include keeping a journal and giving myself time to reflect on new ideas and information. More ideas:
4.14
Language: On this aspect, this survey resullt shows that I always enjoys saying, hearing, and seeing words, including telling stories.
Its also shows that I am really motivated by books, records, dramas, opportunities for writing. The survey therefore testify that the effective techniques of enhancing my learning is by using my language intelligence include reading aloud, especially plays and poetry. Another idea is to write down reflections on what I have read. I will also enjoy exploring and developing love of words, i.e., meanings of words, origin of words and idioms, names. Use different kinds of dictionaries. Other ideas:
3.71
Body Movement:
On this note, analysis shows that I like to move, dance, wiggle, walk, and swim. I am also likely good at sports, and Ihave good fine motor skills.
I also enjoy taking things apart and putting them back together. Incorporating body movement into my learning will help me process and retain information better. Here are some ideas.
Trace letters and words on each other's back.
Use magnetic letters, letter blocks, or letters on index cards to spell words.
Take a walk while discussing a story or gathering ideas for a story.
Make pipe cleaner letters. Form letters out of bread dough. After you shape your letters, bake them and eat them!
Use your whole arm (extend without bending your elbow) to write letters and words in the air.
Change the place where you write and use different kinds of tools to write, ie., typewriter, computer, blackboard, or large pieces of paper.
Write on a mirror with lipstick or soap.
Take a walk and read all the words you find during the walk.
Handle a Koosh ball or a worry stone during a study session.
Take a break and do a cross-lateral walk.
The scores for your other five intelligences:
3.71
3.43
3.29
3
2.29
On final; note, it is stated that because these five are not in my top three doesn't mean I am not strong in them.
If my average score for any intelligence is above three, I am probably using that intelligence quite often to help me learn.
http://www.literacyworks.org/mi/assessment/cgi-bin/results.cgi Read More
Share:
Tags
Cite this document
(“Multiple Intelligences Essay Example | Topics and Well Written Essays - 500 words”, n.d.)
Retrieved from https://studentshare.org/miscellaneous/1525244-multiple-intelligences

CHECK THESE SAMPLES OF Multiple Intelligences

...?Multiple Intelligence (MI) Theory and the Making of the New Curriculum Multiple Intelligence (MI) theory, a diverse idea of intelligence, provides educators a coherent and valid paradigm with which to examine their perceptions of instruction and the ability of their students, to decide on how they should organize their students’ learning experiences, and to evaluate their own strong points and limitations and how these affect their behavior and decisions in classrooms (Armstrong, 1986). According to Lazear (2003), the theory has the capability of improving theoretical knowledge, cultivating constructive attitudes toward learning and instruction, boost...
3 Pages(750 words)Research Paper

...?First Howard Gardner's Multiple Intelligences In 1983 Howard Gardner proposed the theory of multiple intelligences to study and give a better description of the idea of intelligence. He suggests that the traditional description of intelligence in psychometrics by mistake proposes that the broad diversity of cognitive abilities that are measured by a series of IQ tests that are used to evaluate general intelligence factor are not correlated, even if correlated then very feebly. An example of such suggestion is that if a student is quick in learning multiplication or division then he is not normally more...
5 Pages(1250 words)Term Paper

Technology gets better over time

...? Multiple Intelligences in Online Learning Multiple Intelligences in Online Learning Introduction Howard Gardner’s ‘Multiple intelligences’ theory becomes highly explicable when applied to e-learning program and activity-based learning. In other words, all online learning programs that are anchored in the strength of individual’s MI potential are more likely to achieve easy success as compare to traditional e-learning strategies. In order for the learners to have the opportunity to appeal their intelligences, e-learning providers have to make the whole program interactive enough with all or some combinations of the eight...
3 Pages(750 words)Essay

...MULTIPLE INTELLIGENCE - AS A TOOL IN EXPLOITING FULL POTENTIAL OF A LEARNER Introduction The theory of multiple intelligences was proposed by psychologist Howard Gardner in 1983. The theory, which was widely used in language teaching advocates that students have different strengths in terms of intelligence. The theory suggests that the notion of measuring intelligence based on IQ testing is too narrow, and Gardner identified seven distinct intelligences: [Verbal/Linguistic (ability to use language effectively); Logical/mathematical (use numbers and abstract patterns effectively and reason well); Visual/spatial (sensitive...
3 Pages(750 words)Essay

...Gardners Multiple-Intelligences Theory: Overview: Howard Gardner came up with the Multiple-Intelligences Theory in the twentieth century in an attempt to explain the term “intelligence.” Gardner basis his theory on the argument that the traditional definition of psychometrics as in the IQ tests lacks the representation of all the cognitive skills humans are naturally blessed with. Gardner’s theory renders the conventional means of judging an individual’s intelligence by means of specific IQ tests meaningless in that they are only a tool to measure one or two of the numerous shades of intelligence people retain. The theory...
2 Pages(500 words)Research Paper

...Gardner’s Theory of Multiple Intelligences ‎ Gardner’s Theory of Multiple Intelligences ‎ The theory of multiple intelligenceswas developed by Howard Gardner, a Harvard psychologist (Plotnik and Kouyoumdjian, 2010, p.23). The initial theory stated seven different intelligences that people use to perceive or understand this world. He suggested that these intelligences existed in everyone; this challenged the traditional view that there were only two types of intelligences, and this has given a new perspective to cognitive sciences. Gardner referred to intelligence as the capacity to solve problems or to fashion products that are valued in one or more cultural setting (Gardner and Hatch, 1989, p.5) Following are his seven proposed... the...
2 Pages(500 words)Essay
sponsored ads
Save Your Time for More Important Things
Let us write or edit the essay on your topic "Multiple Intelligences" with a personal 20% discount.
GRAB THE BEST PAPER

Let us find you another Essay on topic Multiple Intelligences for FREE!