Comments (0)
Add to wishlistDelete from wishlist
Cite this document
Summary
First of all, there was a small group of aged men, who were discussing some recent political issues, such as the latest situation in Congress and international policy of our President George W. Bush. They spent quite a lot of time next to the building and then got slowly dissolved in the crowd of passers by.
…
Download full paperFile format: .doc, available for editing
HIDE THIS PAPERGRAB THE BEST PAPER93.7% of users find it useful 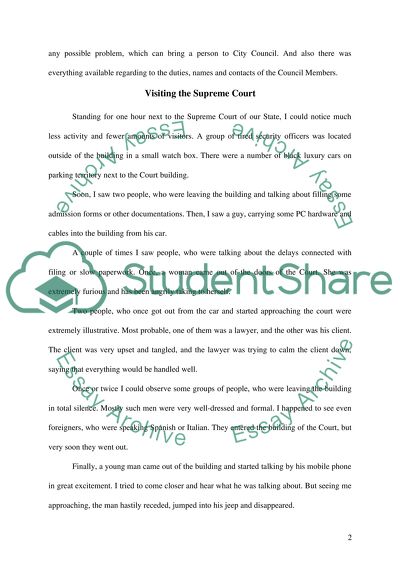 Visiting the Council In the end of working day it was very crowded next to the building of our Council, so I could observe some interesting individuals and actions.
First of all, there was a small group of aged men, who were discussing some recent political issues, such as the latest situation in Congress and international policy of our President George W. Bush. They spent quite a lot of time next to the building and then got slowly dissolved in the crowd of passers by.
Also, I could observe three guys, who were distributing some promotion materials of a new brand of water for domestic use. They were saying that water in our city lines was going more and more terrible, so buying some drinking water was vital.
As it was the end of working hours, there were many officials leaving their working places in the City Council. Many of them were talking about the efforts on forming city budget for 2006 and proper allocation of financial resources. Such talks were frequently accompanied by discussion of taxation issue.
Some people were talking about property matters, in particular, the problems of buying property and investments into construction. For about ten minutes two young men, standing next to the doors of the building, have been lively discussing the necessity of reconstruction of our city park.
Everybody seemed to be very busy next to the Council. But a few officials were leaving the building very slowly. They were discussing some private matters: in particular, sharing their plans for Christmas vacations.
Also, outside of the building I found a board of information about the activity of our city administration. It included general information, accompanied with FAQ section about any possible problem, which can bring a person to City Council. And also there was everything available regarding to the duties, names and contacts of the Council Members.
Visiting the Supreme Court
Standing for one hour next to the Supreme Court of our State, I could notice much less activity and fewer amounts of visitors. A group of tired security officers was located outside of the building in a small watch box. There were a number of black luxury cars on parking territory next to the Court building.
Soon, I saw two people, who were leaving the building and talking about filling some admission forms or other documentations. Then, I saw a guy, carrying some PC hardware and cables into the building from his car.
A couple of times I saw people, who were talking about the delays connected with filing or slow paperwork. Once, a woman came out of the doors of the Court. She was extremely furious and has been angrily taking to herself.
Two people, who once got out from the car and started approaching the court were extremely illustrative. Most probable, one of them was a lawyer, and the other was his client. The client was very upset and tangled, and the lawyer was trying to calm the client down, saying that everything would be handled well.
Once or twice I could observe some groups of people, who were leaving the building in total silence. Mostly such men were very well-dressed and formal. I happened to see even foreigners, who were speaking Spanish or Italian. They entered the building of the Court, but very soon they went out.
Finally, a young man came out of the building and started talking by his mobile phone in great excitement. I tried to come closer and hear what he was talking about. But seeing me approaching, the man hastily receded, jumped into his jeep and disappeared.
The main thing which impressed me a lot was deep thoughtfulness, sadness or worry on the faces of people, entering and going out of the Supreme Court building. It was rather depressive time for me to stand there.
Bibliography:
"City Council." Answers. Online Encyclopedia. 4 Dec. 2005 .
"The Supreme Court of the United States." The Supreme Court. 20 June 2005, 4 Dec. 2005 . Read More
Share:
Tags
Cite this document
(“Visiting the City Council Essay Example | Topics and Well Written Essays - 500 words”, n.d.)
Retrieved from https://studentshare.org/miscellaneous/1525072-visiting-the-city-council

CHECK THESE SAMPLES OF Visiting the City Council

...of clients to this shopping center? What is your general relationship to the larger Newcastle City Council? 4. Results and Discussions 4.1. Results The study yielded interesting results in support supporting the assumptions that the city council had initiatives in place to attract visitors. Out of 210 individuals interviewed, it was noted that 120 individuals were either domestic or foreign visitors to the city and the shopping mall. Only a third of the visiting individuals had been to the shopping center before the study week whereas all the 90 interviewed individuals residing in the city had been to this mall before...
12 Pages(3000 words)Essay

...?Introduction Performance management is primarily known to be a process that encourages collaboration for the members of the local administration. For the Riyadh City Council, they have encountered a number of concerns that must be addressed though performance management standards and practices. For instance, they have experienced problems with improving the methods for keeping up with rapid changes such as civilizational shifts or new lifestyles among community members (Al-Nuaim 2001). To consider services for health, safety, and security, housing plans, and preservation of the environment and historical sites has become a challenge for Riyadh’s local administrators. Moreover, most often, the public’s...
7 Pages(1750 words)Essay

...?Visiting the I am at Fire Island National Seashore, preparing to view Betty Beaumont’s creation “Ocean Landmark”, which she created in 1980 using 500 tons of processed coal-waste and laid on the floor of the Atlantic Ocean’s continental shelf as an artistic sculpture (Art & Technology Collaboration). I have decided to travel to New York and make a trip to Fire Island to see this piece because this sculpture made of volatile, toxic materials has been transformed into a thriving marine ecosystem and brought renewed life to the ecosystem. By creating this piece, Betty Beaumont is trying to let us all know we can take the potentially harmful waste we produce and create something that is helpful to the environment. A...
2 Pages(500 words)Essay

...﻿Legal Method Practice Coursework 1. What were the material facts in the case? The material facts of this case were that the claimant, Geoffery Jack, while driving on highway at dawn suffered a terrible accident. The accident occurred as he was skidding across a road and hit the parapet of the bridge that rendered him almost paralysed. He alleged that the accident was caused due to the presence of ice on the highway and brought an action of damages against the Wessex County Council for their alleged failure to not only maintain the highway but also to ensure that the highway was free of snow and ice. The local authority in its defence argued this was not a part of its duty under Section 41(1) and appealed to the House...
5 Pages(1250 words)Coursework

...and number: submitted: Los Angeles Council Hearing The Council of Los Angeles meets onTuesday, Wednesday and Friday of every week to develop Agendas/memos to be discussed in the council meetings/hearing. The memos always consists a short and general description of the subjects/items to be deliberated at the meetings/hearing. This essay attention is on the momentous hearing held at the City Hall on 200 North Spring Street Los Angeles in room 1010. The hearing was held by Jobs and Business Development Committee. The hearing took place at eight thirty in the morning on the eightieth of September 2012. The regulatory matter/item of the hearing was the motion over amending...
3 Pages(750 words)Essay

...is essential in securing access to the collection area. Further, the other problem that faced the CSX transportation involved establishing a storage point on a portion of property that is on a flood plain. This is not desirable especially with the outdoor storage of contaminant materials. To deal with the property and convince the board on their request, the petitioner moved to the adjacent property not on a flood plain. Further, the shift to the adjacent property, would enable the petitioner the ease of access within the remediation site and important in speeding up the clean-up. However, based on the findings by the City Council staff, the petitioner needs approval to start working on the site and make...
3 Pages(750 words)Essay

...men. It was found that in Dublin where the Council increased the number of bus routes and also decreased the cost of multi trip fares, women benefited the most from that kind of change. It was found that there was a 35% increase in the use of those services. Besides that, there was also the issue of improved economic activity in the city centre during the same year. This was by 13% and could probably be attributed to the fact that there were more people especially women who were entering the city centre. (Rees, 1998) There is a need to improve equality in the employment section of the Council because it was found that representation in some committees is not fair. For...
16 Pages(4000 words)Case Study

Performance of the City Council

...Research paper reporting results and conclusions [Supervisor’s Research paper reporting results and conclusions Introduction: The report entails to find out the satisfaction level of the people for the performance of their city councils. This report also discusses about the research that has been conducted from the community to derive their convenience level with the council’s performance in terms of their core services, infrastructure and environment initiatives. This paper would also evaluate the performance of the city council. Literature Review: Governance defined in International literature: Kjaer (2004) defines governance as the setting,...
5 Pages(1250 words)Essay

... Mayor Council structure or Council Manager structure Be it Mayor council structure or manager structure one important thing to note is the fact that all these types of structures are all in one way meant to offer good leadership to the citizens. To begin with, leadership is one very important aspect for the success of any city and all the stakeholders be it the businessmen, the civic leaders or the residents of the city all look forward to a great leadership since that is the only surest way through which the city of Metropolis would continue on its upward trend as far as development is concerned. The role of city mayor or city manager cannot be under played since he is not only in charge of the day to day running of the funds... that are...
7 Pages(1750 words)Research Paper

... The the video was 11th November, This is the when the meeting took place The main problems facing of Bloomington pertains to the aging municipal facilities and housing stock, traffic congestion on both the underlying intestate and corresponding neighborhood roads. There is also the problem of the aging population within the City of Bloomington, sustainable development, aging infrasturucture, urban advancement and redevelopment and lack of the social amenities for physical fitness and healthier transpiration alternatives. The problem of traffic congestion on intestate and corresponding neighborhood roads has prompted City of Bloomington to undertake drastic measure. Motorist ought to be offer with relatively safer, smoother... and paths....
2 Pages(500 words)Essay
sponsored ads
Save Your Time for More Important Things
Let us write or edit the essay on your topic "Visiting the City Council" with a personal 20% discount.
GRAB THE BEST PAPER

Let us find you another Essay on topic Visiting the City Council for FREE!