Comments (1)
Add to wishlistDelete from wishlist
Cite this document
Summary
Diabetes mellitus is an illness of chronic nature that requires life-long continuing medical care and self-management education for the patients in order to prevent acute complications as well as to reduce the risk of long-term complications thereof. There is a large body of evidence available that supports a range of interventions in controlling diabetes mellitus, and issues include many a things other than simply having an adequate glycaemic control…
Download full paperFile format: .doc, available for editing
HIDE THIS PAPERGRAB THE BEST PAPER95.5% of users find it useful 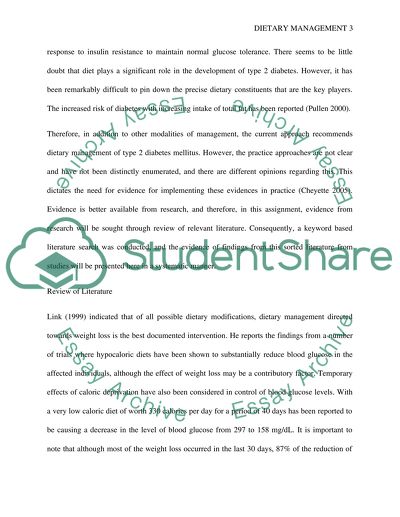 Download file to see previous pages Insulin resistance is relative, however, since supernormal levels of circulating insulin will normalize the plasma glucose. Insulin resistance impairs glucose utilization by insulin-sensitive tissues and increases hepatic glucose output; both effects contribute to the hyperglycemia. Increased hepatic glucose output predominantly accounts for increased FPG levels, whereas decreased peripheral glucose usage results in postprandial hyperglycemia. In skeletal muscle, there is a greater impairment in nonoxidative glucose usage than in oxidative glucose metabolism through glycolysis (Dyson 2002).
Glucose metabolism in insulin-independent tissues is not altered in type 2 DM. Another emerging theory proposes that elevated levels of free fatty acids, a common feature of obesity, may contribute to the pathogenesis of type 2 DM. Free fatty acids can impair glucose utilization in skeletal muscle, promote glucose production by the liver, and impair beta cell function. Insulin secretion and sensitivity are interrelated. In type 2 DM, insulin secretion initially increases in response to insulin resistance to maintain normal glucose tolerance. There seems to be little doubt that diet plays a significant role in the development of type 2 diabetes. However, it has been remarkably difficult to pin down the precise dietary constituents that are the key players. The increased risk of diabetes with increasing intake of total fat has been reported (Pullen 2000).
Therefore, in addition to other modalities of management, the current approach recommends dietary management of type 2 diabetes mellitus. However, the practice approaches are not clear and have not been distinctly enumerated, and there are different opinions regarding this. This dictates the need for evidence for implementing these evidences in practice (Cheyette 2005). Evidence is better available from research, and therefore, in this assignment, evidence from research will be sought through review of relevant literature. Consequently, a keyword based literature search was conducted, and the evidence of findings from this sorted literature from studies will be presented here in a systematic manner.
Review of Literature
Link (1999) indicated that of all possible dietary modifications, dietary management directed towards weight loss is the best documented intervention. He reports the findings from a number of trials where hypocaloric diets have been shown to substantially reduce blood glucose in the affected individuals, although the effect of weight loss may be a contributory factor. Temporary effects of caloric deprivation have also been considered in control of blood glucose levels. With a very low caloric diet of worth 330 calories per day for a period of 40 days has been reported to be causing a decrease in the level of blood glucose from 297 to 158 mg/dL. It is important to note that although most of the weight loss occurred in the last 30 days, 87% of the reduction of blood glucose would occur within the first 10 days of this dietary management. However, with the resumption of isocaloric feeding, the glucose gain would not persist, but the weight loss would be preserved indicating positive effects on control of ...Download file to see next pagesRead More
Share:
Tags
Cite this document
(“Dietary Management of Type 2 Diabetes Mellitus Research Paper”, n.d.)
Dietary Management of Type 2 Diabetes Mellitus Research Paper. Retrieved from https://studentshare.org/miscellaneous/1520338-dietary-management-of-type-2-diabetes-mellitus

gb
gbeier added comment 5 months ago
Student rated this paper as
The topic of "Dietary Management of Type 2 Diabetes Mellitus" was impossible to find. I spent ages to find it. Here at StudentShare, I got the finest sample. Many thanks!

CHECK THESE SAMPLES OF Dietary Management of Type 2 Diabetes Mellitus

Let us find you another Research Paper on topic Dietary Management of Type 2 Diabetes Mellitus for FREE!