Comments (0)
Add to wishlistDelete from wishlist
Cite this document
Summary
Concerns about young children's lack of understanding of advertising have frequently been voiced by parents, regulatory bodies, and politicians who, in turn, have been reassured by advertisers and marketers that children fully understand such advertising and there is no need for further research or regulation.
…
Download full paperFile format: .doc, available for editing
HIDE THIS PAPERGRAB THE BEST PAPER98.9% of users find it useful 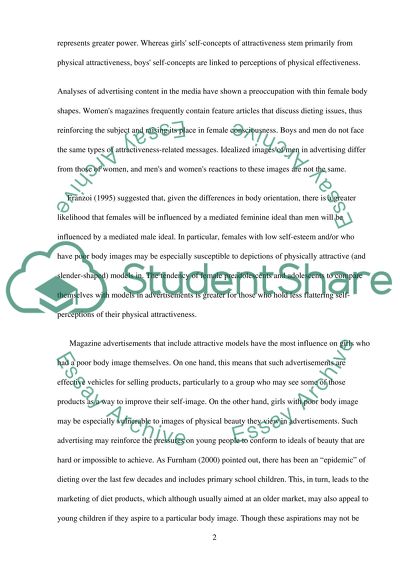 Body image Concerns about young children's lack of understanding of advertising have frequently been voiced by parents, regulatory bodies, and politicians who, in turn, have been reassured by advertisers and marketers that children fully understand such advertising and there is no need for further research or regulation.
Much attention has been devoted to the susceptibility of teenage girls to the incidental influences of role models in advertising. In particular, there has been concern about the influence of advertisements containing physically attractive actors and models with very slender body shapes. Teenage girls tend to view their bodies critically and may hold negative self-perceptions about their physical appearance. Teenage girls are much more likely than teenage boys to question their attractiveness. This negative self-concept is especially likely to be manifest as dissatisfaction with body shape. Girls in their early teens, or even among those who are younger if they achieve puberty early, frequently express dissatisfaction with their body size and appearance (Williams & Currie, 2000).
The emergence of body image concerns is important because it may be associated with the appearance of disordered eating patterns. This is especially worrying when it occurs in early teen years that are in crucial period for physical growth. The more dissatisfied young girls are with their bodies, the more likely they are to undereat, with implications for their health and well-being.
Males, in contrast, usually take a different view of their bodies. That is not to say that boys and young men are unconcerned about their body image, but rather than wanting to be thinner and more attractive, many males want to be more muscular with greater bulk. For males, this represents greater power. Whereas girls' self-concepts of attractiveness stem primarily from physical attractiveness, boys' self-concepts are linked to perceptions of physical effectiveness.
Analyses of advertising content in the media have shown a preoccupation with thin female body shapes. Women's magazines frequently contain feature articles that discuss dieting issues, thus reinforcing the subject and raising its place in female consciousness. Boys and men do not face the same types of attractiveness-related messages. Idealized images of men in advertising differ from those of women, and men's and women's reactions to these images are not the same.
Franzoi (1995) suggested that, given the differences in body orientation, there is a greater likelihood that females will be influenced by a mediated feminine ideal than men will be influenced by a mediated male ideal. In particular, females with low self-esteem and/or who have poor body images may be especially susceptible to depictions of physically attractive (and slender-shaped) models in. The tendency of female preadolescents and adolescents to compare themselves with models in advertisements is greater for those who hold less flattering self-perceptions of their physical attractiveness.
Magazine advertisements that include attractive models have the most influence on girls who had a poor body image themselves. On one hand, this means that such advertisements are effective vehicles for selling products, particularly to a group who may see some of those products as a way to improve their self-image. On the other hand, girls with poor body image may be especially vulnerable to images of physical beauty they view in advertisements. Such advertising may reinforce the pressures on young people to conform to ideals of beauty that are hard or impossible to achieve. As Furnham (2000) pointed out, there has been an "epidemic" of dieting over the last few decades and includes primary school children. This, in turn, leads to the marketing of diet products, which although usually aimed at an older market, may also appeal to young children if they aspire to a particular body image. Though these aspirations may not be derived originally from images in advertisements, (because stereotypical images exist across all aspects of the media), advertisements can reinforce those stereotypes in some children and young people. The issue of stereotyping is discussed in more detail in chapters 2 and 7.
In conclusions, both girls and boys maybe susceptible to the influence of advertisements that depict body shape and physical appearance norms. While many girls seek to be thinner, many boys want to become more muscular.
Bibliography:
1. Williams, J. M., & Currie, C. (2000). Self-esteem and physical development in early adolescence: Pubertal timing and body image. Journal of Early Adolescence, 20(2), 129-149.
2. Franzoi, S. L. (1995). The body-as-object versus the body-as-process: Gender differences and gender considerations. Sex Roles, 33(5/6), 417-437.
3. Furnham, A. (2000). Children and advertising: The allegations and the evidence. London: Social Affairs Unit. Read More
Share:
Tags
Cite this document
(“Body Image Essay Example | Topics and Well Written Essays - 500 words”, n.d.)
Retrieved de https://studentshare.org/miscellaneous/1515381-body-image-essay

...? Body Image Aspects Involved In the Development of Adolescent Body Image The Nivea Visage advert features Akademi Fantasia’s star Marsha Londoh. In the advert, the star talks of how having oil free and beautiful looking skin while on stage (which comes after using Nivea visage helps her feel more confident. She goes on to say that having beautiful skin gives her the freedom to enjoy herself. The advert goes on to say that the product (Nivea visage deep pore control foam) contains carntine, which cleanses the skin making it look soft and beautiful. The advert can be viewed from http://www.youtube.com/watch?v=GTO-V4qdLS8 The product targets the young female between the age...
4 Pages(1000 words)Essay

...Purpose of the Study The present study is about the relationship between the body image and various psychopathologies. In fact, it tries to fill a research gap in the field, which the earlier studies could not explore or deliberately avoided. The earlier researches focused its attention only on adolescents and college-aged respondents whose dissatisfaction owing to their negative body image contributed to psychopathologies, most frequently eating disorders. But, the problem is a universal phenomenon as it may be felt by anybody at any stage of his/her life cycle. The main objectives of the study are given below: 1. To study about the body...
3 Pages(750 words)Essay

...Body Image Introduction On many college campuses, substantial attention has been paid on the effects of physical characteristics and self-perceptions of the body on women's behaviors, cognitions, and its influence. Most of the time, issues like the physical attractiveness, body image satisfaction, weight concerns, and eating problems have become apparently the most important concerns on many women. Although research from Wardle et al. (1993) has found a much lower prevalence of eating disorders in non-Western countries, it is apparent that diagnoses of eating disorders are particularly prevalent among young women and girls (with an approximation of 90...
6 Pages(1500 words)Essay

...Body Image and Identity The axis on which good interpersonal communication rotates is self concept. A person's body image refers to the perception, thoughts and beliefs that the person has towards their appearance. This concept of one's self stems from influences from outside, cultural expectations and comparisons that one draws with the perceived ideal image. This body image reflects in the way they relate to others. In this case Reece has a poor self concept that has grown out of her skewed body image. She identifies herself as an unattractive, overweight person and this identity...
3 Pages(750 words)Assignment

...15 December 2008 What Women do to have a Perfect Body in Today's Society Perfect body image is a dream of every woman who value personal identity issues and unique personal image. A pertinent issue during early adolescence is that bodily changes bring about a sense of fragmentation in body image. Thus, the body is frequently depicted as a collection of individual parts, such as breasts and hips (Gilbert 82). So, for example, many women worry about the size of their breasts. In the United States, bigger is generally considered better, yet not from women's perspectives. Rather others are believed to hold that value....
4 Pages(1000 words)Essay

...Thesis False and distorted body images popularized by media has a negative impact on self-identity, psychical and psychological development of teens. Outline Introduction 1. Body Images of Girls a. Eating disorders b. Adulthood and independence c. Approximation to ideal 2. Body Images of Boys a. Violence and aggression as factors of manhood b. Body decoration as an index of social and moral qualities, 3. Sexual Images a. Impact of sexual images b. Body and a tool of marketing 4. Impact of False Media Images on Gender Relations 5. Conclusion 6....
6 Pages(1500 words)Essay

...In our current society it has, especially for women, become the norm to be dissatisfied with one’s body and to exhibit an antagonistic relationship with food. This phenomenon has been termed a normative discontent by specialists who study eating disorders (Lowery, et al., 2005; Hoyt & Kogan, 2001). This dissatisfaction reflects the perception that many women have of their bodies and the image that they present to society, yet studies have shown that more and more men are exhibiting this type of behavior (Rinderknecht & Smith, 2002). One’s body image is a subjective and changeable view of the whole or parts of one’s body, which contributes...
7 Pages(1750 words)Essay

...target marketing in order to reach their markets and propagate their message. On the other hand, the detrimental effects of the marketing in people’s mind are shown in Dan Cook’s Lunchbox. Hegemony. These two articles reflect how marketers shape the body image of customers through the use of advertising and how advertising leads to the deterioration of our self-worth. Joseph Turrow describes how marketers are diverting their efforts from mass marketing to target marketing where specific advertising messages are geared to capture a specific audience. This is done by tailoring a program which is suited only for the target market while signaling the wrong people to go away. Target advertising, which aims...
2 Pages(500 words)Essay

...Body Image al Affiliation Part Detailed of an Advertisement Victoria Secret Commercial shows Victoria’s secret models posing in the body by Victoria bra collection with different new looks and spectacular comfort. The company uses body positivity to advertise their products hence gaining too much credit. It shows a few conventionally curvy women although the naked images tend to show how women’s self-esteem is torn down by our culture. The commercial that acts as a cultural gatekeeper of sexual perfection uses an unattainable body shape to sell bras to teenagers who always worry about how they perfectly look in the eye of men. It attracts...
2 Pages(500 words)Essay

Electrical Safety in the Workplace

8 Pages(2000 words)Term Paper
sponsored ads
Save Your Time for More Important Things
Let us write or edit the essay on your topic "Body Image Essay" with a personal 20% discount.
GRAB THE BEST PAPER

Let us find you another Essay on topic Body Image Essay for FREE!