Comments (1)
Add to wishlistDelete from wishlist
Cite this document
Summary
Leadership is about influence. It is about influencing a group of people to accomplish a goal. Leaders use their own energies to help accomplish a common purpose. Leadership can be defined as a trait or as a process. Marquis and Huston (2000) would define leadership as "a point of polarization for group cooperation." It is certain that every leader gets to that point of polarization differently…
Download full paperFile format: .doc, available for editing
HIDE THIS PAPERGRAB THE BEST PAPER91% of users find it useful 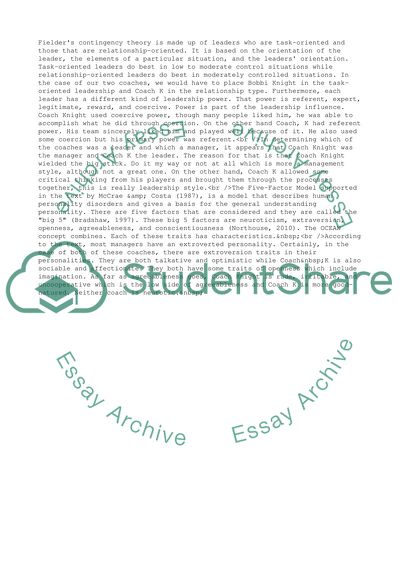 Extract of sample "Leadership a tale of two coaches"

Download file to see previous pages Bobbi Knight and Coach K are two famous basketball coaches that achieved great success and whose leadership styles were completely different. This paper will discuss those two coaches and their leadership styles.
Fielder's contingency theory is made up of leaders who are task oriented and those that are relationship oriented. It is based on the orientation of the leader, the elements of a particular situation and the leaders' orientation. Task oriented leaders do best in low to moderate control situations while relationship oriented leaders do best in moderately controlled situations. In the case of our two coaches, we would have to place Bobbi Knight in the task oriented leadership and Coach K in the relationship type. Furthermore each leader has a different kind of leadership power. That power is referent, expert, legitimate, reward and coercive. Power is part of the leadership influence. Coach Knight used coercive power, though many people liked him, he was able to accomplish what he did through coercion. On the other hand Coach K had referent power. His team sincerely liked him and played well because of it. He also used some coercion but his primary power was referent.
In determining which of the coaches was a leader and which a manager, it appears that Coach Knight was the manager and Coach K the leader. The reason for that is that Coach Knight wielded the big stick. Do it my way or not at all which is more a management style, although not a great one. On the other hand, Coach K allowed some critical thinking from his players and brought them through the processes together, this is really leadership style.
Five Factor Model
The Five Factor Model supported in the text by McCrae & Costa (1987), is a model that describes human personality disorders and gives a basis for the general understanding personality. There are five factors that are considered and they are called the "big 5" (Bradshaw, 1997). These big 5 factors are neuroticism, extraversion, openness, agreeableness, and conscientiousness (Northouse, 2010). The OCEAN concept combines. Each of these traits has characteristics. These characteristics are noted in the table.
Characteristics
High Scorers
Factor
Characteristics
Low Scorers
Creative, original, curious, imaginative
Openness-Toleration for exploration of the unfamiliar
Unartistic, conventional
Organized, reliable, neat, ambitions
Conscientiousness-Individual has degree of organization, persistence, and motivation in goal directed behavior.
Unreliable, lazy, careless, negligent
Talkative, optimistic, sociable, affectionate
Extraversion-Capacity for joy, need for stimulation
Unartistic, conventional
Good-natured, trusting, helpful
Agreeableness-Ones orientation along a continuum from compassion to antagonism in thoughts, feelings, and actions
Rude, uncooperative, irritable
Calm, content, secure, unemotional, relaxed
Neurotism-proneness to psychological distress, excessive cravings or urges, unrealistic ideas
Self-pitying, worrying, insecure, emotional, nervous
According to the text, most managers have an extroverted personality. Certainly in the case of both of these coaches there are extroversion traits in their personalities. They are both talkative and optimistic while Coach ...Download file to see next pagesRead More
Share:
Tags
Cite this document
(“Leadership a tale of two coaches Essay Example | Topics and Well Written Essays - 1750 words”, n.d.)
Leadership a tale of two coaches Essay Example | Topics and Well Written Essays - 1750 words. Retrieved from https://studentshare.org/miscellaneous/1514000-leadership-a-tale-of-two-coaches

lo
longaylord added comment 1 year ago
Student rated this paper as
This essay saved me today. I liked the style. It was very useful for my miscellaneous course.

CHECK THESE SAMPLES OF Leadership a tale of two coaches

According to statistics released by the World Health Organization (WHO), currently, 180 million people worldwide have diabetes, with 2.9 million deaths per year occurring due to complications cau...

6 Pages(1500 words)Article
sponsored ads
Save Your Time for More Important Things
Let us write or edit the essay on your topic "Leadership a tale of two coaches" with a personal 20% discount.
GRAB THE BEST PAPER

Let us find you another Essay on topic Leadership a tale of two coaches for FREE!