Comments (0)
Add to wishlistDelete from wishlist
Cite this document
Summary
Erikson's psychosocial stages of development provide an understanding of environmental challenges each individual face dependent upon their chronological age. Erikson believes that during adolescents' teenagers' progress through identity versus confusion. During this stage adolescents learn to develop themselves and form an identity…
Download full paperFile format: .doc, available for editing
HIDE THIS PAPERGRAB THE BEST PAPER98.7% of users find it useful 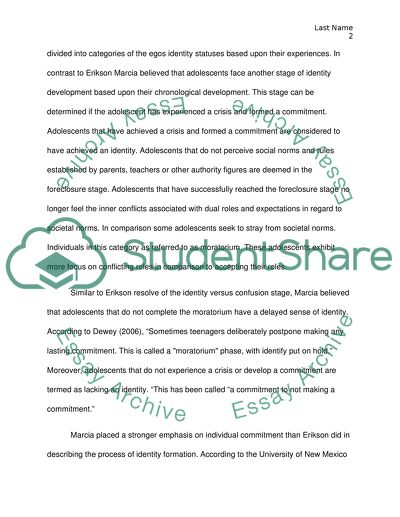 November 7, Assignment Erikson's psychosocial stages of development provide an understanding of environmental challenges each individual face dependent upon their chronological age. Erikson believes that during adolescents' teenagers' progress through identity versus confusion. During this stage adolescents learn to develop themselves and form an identity. "According to Erikson's psychosocial model of development, identity must be perceived by the individual, but also recognized and confirmed by others" (The University of New Mexico, n.d.). Upon the successful conclusion of this phase the adolescent will learn to accept and understand themselves. However, if this stage is not successfully resolved the adolescent will continue to feel lost and unguided during adulthood. In contrast Marcia expanding on Erikson's theory of psychosocial development adding new stages that he believed adolescents chronologically progress through.
Erikson believed that adolescents are heavily influenced by their peers and role models. These influences may hinder the development of the self. Marcia expanded Erikson's theory on psychosocial development. Marcia believed that adolescents experienced four identity statuses. Moreover Marcia believed that adolescents can be divided into categories of the egos identity statuses based upon their experiences. In contrast to Erikson Marcia believed that adolescents face another stage of identity development based upon their chronological development. This stage can be determined if the adolescent has experienced a crisis and formed a commitment. Adolescents that have achieved a crisis and formed a commitment are considered to have achieved an identity. Adolescents that do not perceive social norms and rules established by parents, teachers or other authority figures are deemed in the foreclosure stage. Adolescents that have successfully reached the foreclosure stage no longer feel the inner conflicts associated with dual roles and expectations in regard to societal norms. In comparison some adolescents seek to stray from societal norms. Individuals in this category as referred to as moratorium. These adolescents exhibit more focus on conflicting roles in comparison to accepting their roles.
Similar to Erikson resolve of the identity versus confusion stage, Marcia believed that adolescents that do not complete the moratorium have a delayed sense of identity. According to Dewey (2006), "Sometimes teenagers deliberately postpone making any lasting commitment. This is called a "moratorium" phase, with identify put on hold." Moreover, adolescents that do not experience a crisis or develop a commitment are termed as lacking an identity. "This has been called "a commitment to not making a commitment."
Marcia placed a stronger emphasis on individual commitment than Erikson did in describing the process of identity formation. According to the University of New Mexico (n.d.), "In Marcia's model, identity involves the adoption of 1) a sexual orientation, 2) a set of values and ideals and 3) a vocational direction." Marcia's theory branches off of Erikson's psychosocial development in explaining how identity is formed and the conflicts that arise during adolescents. Moreover, "Erikson felt that adolescents were engaged in a struggle between identity and feelings of confusion" (Dewey, 2006). Upon successful resolve of the stage Erikson would argue that the adolescent learns fidelity and loyalty in their developed self (Boeree, 2006).
References
Adolescent Identity. The University of New Mexico. 2002. Web. November 7, 2010.
Boeree, G., Erik Erikson., Shippensburg University. 2006. Web. November 7, 2010.
Dewey. Erikson's Psychosocial Stages. Psych Webpage. 2006. Web. November 7, 2010. Read More
Share:
Tags
Cite this document
(“General psychology Essay Example | Topics and Well Written Essays - 500 words”, n.d.)
General psychology Essay Example | Topics and Well Written Essays - 500 words. Retrieved from https://studentshare.org/miscellaneous/1513768-general-psychology

CHECK THESE SAMPLES OF General psychology

Sport psychology consultants need to be sensitive to the individual characteristics of athletes and the sports in which they play to decrease help-seeking barriers and facilitate help-seeking behaviors (Martin, 2005). In turn, sport psycholog...
39 Pages(9750 words)Research Paper

Humans were born with the capacity to know and the freedom to choose between good and evil.  Given this freedom, we are responsible for our decisions, actions, and thoughts. Consequently, there is a need for therapy when an individual is unable or unwilling to accept personal responsibility for emotional problems.   We are not perfect therefore we make imperfect decisions. Therapy in this integrative approach attempts to get the client to live at peace with themselves in spite of mistakes. However, the level of peace depends on the extent to which one allows the environment to influence one’s inner world. Individuals, therefore, have the capability to improve themselves. Nonetheless, we have the tendency to develop...
6 Pages(1500 words)Assignment
sponsored ads
Save Your Time for More Important Things
Let us write or edit the essay on your topic "General psychology" with a personal 20% discount.
GRAB THE BEST PAPER

Let us find you another Essay on topic General psychology for FREE!