Comments (0)
Add to wishlistDelete from wishlist
Cite this document
Summary
The term 'labeling theory' explains that human thought and behaviors are largely influenced by external factors and take its root from the works of Frank Tannenbaum who formulated a multi-disciplinary approach to crime causation. …
Download full paperFile format: .doc, available for editing
HIDE THIS PAPERGRAB THE BEST PAPER93.1% of users find it useful 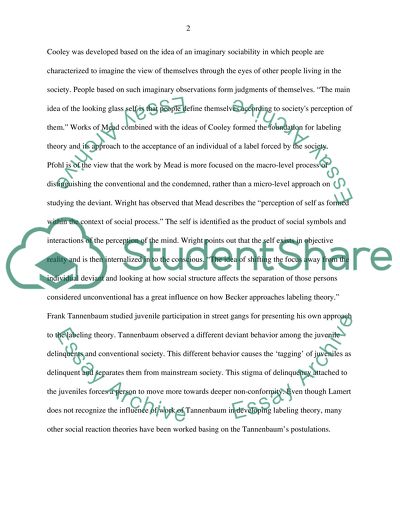 Download file to see previous pages This theory deals with the relationship of the individual with the society. This theory is based on the concept of 'Dramatization of Evil" which argues that an individual must look at all stages of the deviant's life from childhood to adulthood, so that the individual can understand the nature of a crime.

Based on the works of Tannenbaum, Howard Becker developed the theory of labeling also known as social reaction theory. Labeling theory was outlined in his 1963 book "Outsiders: Studies in the Sociology of Deviance". Labeling theory was evolved in a period when there was widespread social and political power struggle which was developed within the world of college campus (pfohl). During this period many of the college students and faculty embraced liberal political movements and Becker harnessed this political influence and associated it with the labeling theory and its symbolic interaction theoretical background of Lemert. Becker has shaped his theory based on the prevailing social reaction approach of Lemert, symbolic interaction foundation of Cooley and Mead and the labeling influences of Tannenbaum and Lemert.

Charles Cooley used the personal perception of individuals through studies of children and their imaginary friends to explain the human nature and the social order. The theoretical concept of Cooley was developed based on the idea of an imaginary sociability in which people are characterized to imagine the view of themselves through the eyes of other people living in the society. People based on such imaginary observations form judgments of themselves. "The main idea of the looking glass self is that people define themselves according to society's perception of them." Works of Mead combined with the ideas of Cooley formed the foundation for labeling theory and its approach to the acceptance of an individual of a label forced by the society.
Pfohl is of the view that the work by Mead is more focused on the macro-level process of distinguishing the conventional and the condemned, rather than a micro-level approach on studying the deviant. Wright has observed that Mead describes the "perception of self as formed within the context of social process." The self is identified as the product of social symbols and interactions of the perception of the mind. Wright points out that the self exists in objective reality and is then internalized in to the conscious. "The idea of shifting the focus away from the individual deviant and looking at how social structure affects the separation of those persons considered unconventional has a great influence on how Becker approaches labeling theory."
Frank Tannenbaum studied juvenile participation in street gangs for presenting his own approach to the labeling theory. Tannenbaum observed a different deviant behavior among the juvenile delinquents and conventional society. This different behavior causes the 'tagging' of juveniles as delinquent and separates them from mainstream society. This stigma of delinquency attached to the juveniles forces a person to move more towards deeper non-conformity. Even though Lamert does not recognize the influence of work of Tannenbaum in developing labeling theory, many other social reaction theories have been worked basing on the Tannenbaum's postulations.
Edwin Lamert not quite comfortable with theories that take the concept of deviance for granted has diverted his focus on the social construction of deviance. Lamert has considered deviance as "the product society's reaction to an act and the affixing of a deviant label on the actor." According to Lamert it is the initial incidence of an ...Download file to see next pagesRead More
Share:
Tags
Cite this document
(“Labeling Theory Essay Example | Topics and Well Written Essays - 7000 words”, n.d.)
Retrieved from https://studentshare.org/miscellaneous/1513401-labeling-theory

CHECK THESE SAMPLES OF Labeling Theory

...Management Theory and Practice in the early childhood education industry This Report applies management theory into practice in the early childhood industry, especially in the context of women leaders. Management issues play a significant role in the academic sector, because early childhood professionals need higher levels of motivation in order to avoid burnout . As pointed out in a study by Osgood and Halsall (2007) where they carried out research to examine the position of women in leadership or management positions, a “glass ceiling” exists for women in the academic setting, which could significantly impair motivation. Since many of the individuals employed in the early education sector are women, addressing this issue is even more...
6 Pages(1500 words)Coursework
sponsored ads
Save Your Time for More Important Things
Let us write or edit the essay on your topic "Labeling Theory" with a personal 20% discount.
GRAB THE BEST PAPER

Let us find you another Essay on topic Labeling Theory for FREE!