Comments (0)
Add to wishlistDelete from wishlist
Cite this document
Summary
Microsoft Windows is a family of operating systems by Microsoft for use basically on personal computers, but it has been successfully proved since the first version of Windows that they can run on several types of platforms such as servers and embedded devices…
Download full paperFile format: .doc, available for editing
HIDE THIS PAPERGRAB THE BEST PAPER92.9% of users find it useful 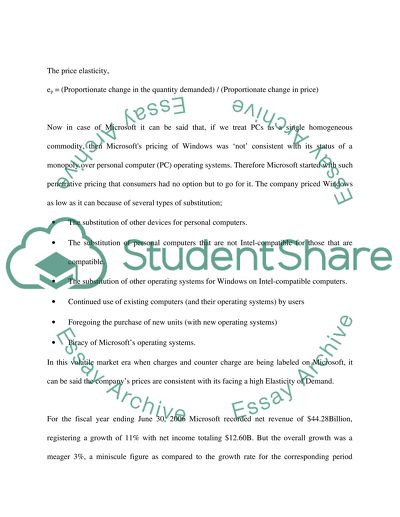 Microsoft Windows Operating System Microsoft Windows is a family of operating systems by Microsoft for use basically on personal computers, but it has been successfully proved since the first version of Windows that they can run on several types of platforms such as servers and embedded devices. First introduced in November 1985 as an add-on to MS-DOS, this operating system has grown from strength to strength having different variants till Windows XP and XP-Pro. Now the world is waiting for Windows Vista which is to be launched by January, 2007. Business economics tell us that a perfectly competitive market has the following characteristics:
There are many buyers and sellers in the market.
The goods offered by the various sellers are largely the same.
Firms can freely enter or exit the market.
But in case of Microsoft operating the market is totally dominated by Microsoft. Based solely on market share, Microsoft appears to have a near-monopoly in operating systems for personal computers yet Microsoft priced the Windows OS very smartly and kept it at bare minimum and thus succeeded in capturing in the market. The law of demand tells us that as the price of a commodity falls, the quantity demanded increases and vice-versa. But the law is silent on the extent of increase in demand as a result of decrease in certain percentage of prices. That means the law of demand tells us only the direction of change, but not the rate which the change takes place. To know about the rate of change we should know the 'price elasticity of demand'. Elasticity of demand can be defined as the "degree of responsiveness of quantity demanded to a change in price." It thus represents the rate of change in the quantity demanded due to a change in price.
The price elasticity,
ep = (Proportionate change in the quantity demanded) / (Proportionate change in price)
Now in case of Microsoft it can be said that, if we treat PCs as a single homogeneous commodity, then Microsoft's pricing of Windows was 'not' consistent with its status of a monopoly over personal computer (PC) operating systems. Therefore Microsoft started with such penetrative pricing that consumers had no option but to go for it. The company priced Windows as low as it can because of several types of substitution;
The substitution of other devices for personal computers.
The substitution of personal computers that are not Intel-compatible for those that are compatible.
The substitution of other operating systems for Windows on Intel-compatible computers.
Continued use of existing computers (and their operating systems) by users
Foregoing the purchase of new units (with new operating systems)
Piracy of Microsoft's operating systems.
In this volatile market era when charges and counter charge are being labeled on Microsoft, it can be said the company's prices are consistent with its facing a high Elasticity of Demand.
For the fiscal year ending June 30, 2006 Microsoft recorded net revenue of $44.28Billion, registering a growth of 11% with net income totaling $12.60B. But the overall growth was a meager 3%, a miniscule figure as compared to the growth rate for the corresponding period ending June 2005. One potential reason for this low growth rate could be that Microsoft did not announce any new variant this year. The product, i.e. the Operating System is such a product which the consumer feels like updating whenever a new variant is around. This tendency will never allow the demand for OS to die-down i.e. the demand will remain there. In economics, economic equilibrium or market equilibrium is defined as a condition when the market "saturates" or "clears": which happens when the market for a product attains the price where the amount supplied of a certain product equals the quantity demanded. But in case of the operating system this condition doesn't seem to be arising in the near future, for the want of regular updation by the consumer and the rapid advancements taking place in the technology field.
References:
1. Microsoft, available online at http://www.microsoft.com/
2. Werden G.J., Microsoft's Pricing of Windows and the Economics of Derived Demand Monopoly, Review of Industrial Organization, Volume 18, Number 3, May 2001, pp. 257-262(6)
3. USA, Department of Justice, "Complaint," United States of America v. Microsoft , 18 May 1998, p. 1. Read More
Share:
Tags
Cite this document
(“Microsoft Windows operating system Essay Example | Topics and Well Written Essays - 500 words”, n.d.)
Retrieved from https://studentshare.org/miscellaneous/1508518-microsoft-windows-operating-system

...?(Add (Add (Add Information) (Add MS Windows 7 Introduction 200 Windows 7 is the most recent operating system developed and released by Microsoft for the purpose of using on personal computers including desktops, netbooks, laptops, tablets, and media centre PCs. Unlike the previous Windows Vista, which introduced a range of innovative features, Windows 7 was developed to meet more customized needs and to make an incremental upgradation to the Windows platform. The development of this new Windows operating system assisted Microsoft to gain...
16 Pages(4000 words)Research Paper

...? Non-Microsoft desktop operating system Table of Contents Table of Contents 2 3 Introduction 3 TYPESOF UNIX OS 4 Hewlett-Packard HP-UX 4 Sun Solaris 4 IBM AIX 5 Reference 7 Abstract The ability of UNIX system to offer its customers with early technologies, prior to its competitor makes it to remain relevant in the market. Even though it offers non-Microsoft operating system, UNIX system has always maintained its customers because of the services. Apart from its stunning compatibility to the technologies, UNIX system offers a wide variety of Operating...
4 Pages(1000 words)Research Paper

...-user OS allows the use of computers by two or more individuals at the same time or different times. Individuals sharing the same computer benefits from this by keeping their privacy through their different accounts. Thus, their documents are hidden and are kept from each other. Multitasking OS denotes those which are capable of running two or more different software at the same time on the same machine. For example, Windows 2000 can run Internet Explorer and open Microsoft Word at the same also allowing the user to do multiple tasks in the computing device. Lastly, multithreading allows are those which allow different parts of individual or more software to run concurrently while multiprocessing is an OS...
4 Pages(1000 words)Essay

...1. Introduction Windows has evolved from a program consisting of 4000 line of s of an assembly language that ran in 8 Kbytes of memory using then Intel 8086 microprocessor to a more complex and robust type of a computer system which runs most of today's computers. In 2000, Microsoft released its new version of the windows called Windows 2000, which are offered to both home PC and professional workstation versions. Its operating system architecture is a hybrid architecture which composed of client/server, layered, object-oriented, and symmetric multiprocessing architecture principles. Windows 2000...
9 Pages(2250 words)Essay

...of data and communication flow, and a lot of office processes is the operating systems. It is a set of manual and automatic procedures that enable a group of people to share a computer installation efficiently (Hansen 1). This program serve as the primary platform where functional software runs. We have heard about DOS and Windows and perhaps are over-familiar with these things. Along these platform categories there belong different types of individual real names for operating systems. Microsoft, Apple, Linux, and other names are similarly popular. Their functions maybe the same but their suitability may differ depending on the...
4 Pages(1000 words)Assignment

Windows, owned by Microsoft, is the operating system installed on more than 90% of the worlds computers. Using your knowledge of economic theory, discuss whether Microsofts monopoly position is in the public interest

...Microsoft is not only a market leader, but one of its products, the Windows operating system, is installed in almost 90 percent of desktops and laptops in the around the globe. In 1998, a case had been filed in the U.S. District Court of the District of Columbia regarding the fact that “Microsoft possesses (and for several years has possessed) monopoly power in the market for personal computer operating systems” (McKenzie and Shughart II, 2013). According to the judgement delivered by the Justice Department, Microsoft is a monopolist. Bundling of Netscape & Media Player Bundling is the situation in...
4 Pages(1000 words)Essay

..., and if a new software or hardware has been installed. After booting for around a minute, the OS gets started. After startup, it manages the processes, takes user’s commands, and works accordingly. OS makes sure that all the programs get their required memory and storage on the hard disk. Examples of OS include Microsoft Windows, Apple Macintosh, and Linux. Windows OS was created in 1980s by the Microsoft. When we buy a computer system, OS is already installed in it, but we can also install it at home without professional help. All we need to do is follow the step-by-step instructions that come on the screen after we start loading our desired OS from CD....
1 Pages(250 words)Essay

...-processor. 13) Describe the operating systems two modes of operation. A processor in a computer running Windows has two different modes: user mode and kernel mode. The processor switches between the two modes depending on what type of code is running on the processor. Applications run in user mode, and core operating system components run in kernel mode. Many drivers run in kernel mode, but some drivers run in user mode. Two modes of   operation of an operating system is described as Kernel or   User. The hardware will be joined in the computer by a mode   bit to demonstrate the running...
7 Pages(1750 words)Essay
sponsored ads
Save Your Time for More Important Things
Let us write or edit the essay on your topic "Microsoft Windows operating system" with a personal 20% discount.
GRAB THE BEST PAPER

Let us find you another Essay on topic Microsoft Windows operating system for FREE!