Comments (0)
Add to wishlistDelete from wishlist
Cite this document
Summary
The Korean Peninsula has a history of several hundred years as a country that was united by language, ethnicity, and cultural traditions. Korea had long been one of the most homogeneous societies in the world (Gourevitch). This rich tradition of unity benefited Korea as it became an advanced and orderly society that enjoyed self-rule until the Japanese Imperialism annexed the country at the beginning of the 20th century…
Download full paperFile format: .doc, available for editing
HIDE THIS PAPERGRAB THE BEST PAPER97.2% of users find it useful 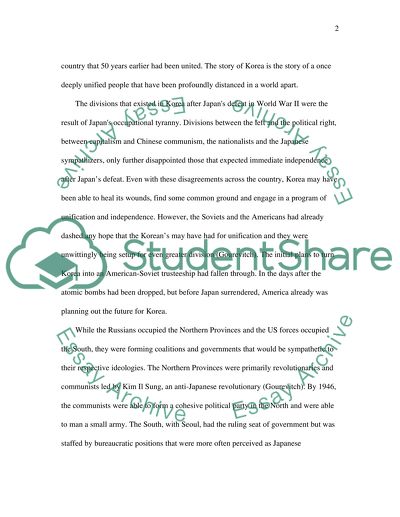 Download file to see previous pages After Japan suffered defeat in World War II, Korea was liberated and Soviet-American agreements exploited the divisions that had sprung up during the previous decades. Aggravated by old resentments, nationalistic attitudes, and the politics of the new Cold War, the Soviet-American actions further divided North and South Korea, precipitated the Korean War, and erected a lasting wall dividing a country that 50 years earlier had been united. The story of Korea is the story of a once deeply unified people that have been profoundly distanced in a world apart.
The divisions that existed in Korea after Japan's defeat in World War II were the result of Japan's occupational tyranny. Divisions between the left and the political right, between capitalism and Chinese communism, the nationalists and the Japanese sympathizers, only further disappointed those that expected immediate independence after Japan's defeat. Even with these disagreements across the country, Korea may have been able to heal its wounds, find some common ground and engage in a program of unification and independence. However, the Soviets and the Americans had already dashed any hope that the Korean's may have had for unification and they were unwittingly being setup for even greater division (Gourevitch). The initial plans to turn Korea into an American-Soviet trusteeship had fallen through. In the days after the atomic bombs had been dropped, but before Japan surrendered, America already was planning out the future for Korea.
While the Russians occupied the Northern Provinces and the US forces occupied the South, they were forming coalitions and governments that would be sympathetic to their respective ideologies. The Northern Provinces were primarily revolutionaries and communists led by Kim Il Sung, an anti-Japanese revolutionary (Gourevitch). By 1946, the communists were able to form a cohesive political party in the North and were able to man a small army. The South, with Seoul, had the ruling seat of government but was staffed by bureaucratic positions that were more often perceived as Japanese collaborators left behind after the occupation. Late in 1945, Dr. Syngman Rhee returned to Korea after residing outside the country during the period of Japanese imperialism. Many U.S. officials favored Rhee, a staunch anti-Communist, to form the new government. Rhee and US Occupation forces made plans to establish a separate government administration in South Korea by organizing the bureaucracy left behind by the Japanese.
Rhee's newly established government set out to cripple his political opponents and destroy any possibility of a leftist uprising in anticipation of overpowering the North and gaining complete control of the unified Korea. By 1949, Rhee had imprisoned 30,000 of his political enemies, had another 70,000 imprisoned in "Guidance Camps", and by December 1949 he was arresting as many as 1,000 suspected communists per day (Cumings, 223). These dictatorial tactics were designed to maintain his power while he eliminated any remaining resistance in the South for a planned invasion of the Northern Provinces.
Who started the war, and who took the first offensive action ...Download file to see next pagesRead More
Share:
Tags
Cite this document
(“Country Report Essay Example | Topics and Well Written Essays - 1750 words”, n.d.)
Country Report Essay Example | Topics and Well Written Essays - 1750 words. Retrieved from https://studentshare.org/miscellaneous/1507969-country-report

CHECK THESE SAMPLES OF Country Report

Legal System: The New Supreme Court of the United Kingdom

Main plans to turn Motorola around

The Concept of Democracy

The use of cigarettes as an accessory in fashion images

The Meaning of Islam and the Five Tenets of Belief

How Can I Be a Good Writer

..., the electricity regulator had to solve a problem that had not been satisfactorily addressed in any other country, which was how to deal with inherent market power in generation. The first attempt through the Pool did not work well, and subsequent regulatory interventions failed to reform the Pool until eventually NETA instituted a well-functioning commodity market in electricity which also confined market power to a restricted area with clear rules. Most of the industry is now competitive, with price controls applied only to the network. Works Cited 1. Abs Energy Research. www.absenergyresearch.com Retrieved on March 8, 2008 2. Colin Robinson (2008). INTRODUCING COMPETITION INTO ENERGY AND WATER MARKETS: SOME...
9 Pages(2250 words)Report

The Strategies for Development Of Mao Zedong and Deng Xiaoping

The Catastrophic Effects Of Global Warming

Let us find you another Essay on topic Country Report for FREE!