Comments (0)
Add to wishlistDelete from wishlist
Cite this document
Summary
From its humble beginning in a downtown Seattle shop in 1982, Starbucks has now risen to become one of the largest players in the global specialty coffee industry. The company's history chronicles its ambitious goals matched with aggressive strategies. With customer satisfaction in mind, the company's operation in the early 1990s is met with huge and phenomenal success…
Download full paperFile format: .doc, available for editing
HIDE THIS PAPERGRAB THE BEST PAPER94.9% of users find it useful 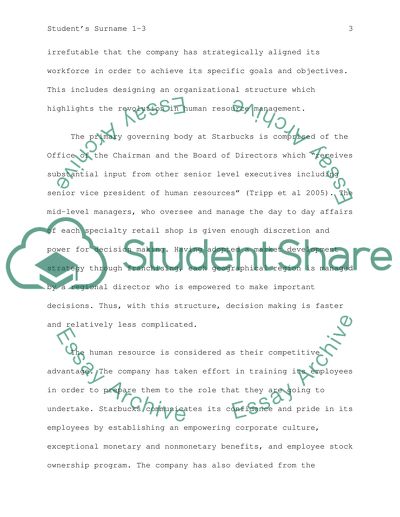 Running Head: BEST PLACES TO WORK Best Places to Work In APA Style By From its humble beginning in a downtown Seattle shop in 1982, Starbucks has now risen to become one of the largest players in the global specialty coffee industry. The company's history chronicles its ambitious goals matched with aggressive strategies. With customer satisfaction in mind, the company's operation in the early 1990s is met with huge and phenomenal success. Starbucks has ascended to become a famous customer brand, enabling it to expand to both related and unrelated industries. Aside from brewing the best specialty coffee in the world, Starbucks has also diversified in the sales of coffee beans, brewing equipments, and music (Starbucks 2008).
The success of Starbucks can be largely attributed to its high regard to its employees which it treats as partner. The specialty coffee retailer is now recognized as one of the best places to work for because of its organizational structure, the relationship between its employees, its unique values, and its employment of modern human resource management techniques.
It should be noted that the business organization efficiently uses its human resource in order to enhance its image and maximize its profitability. In its business operation, it is irrefutable that the company has strategically aligned its workforce in order to achieve its specific goals and objectives. This includes designing an organizational structure which highlights the revolution in human resource management.
The primary governing body at Starbucks is comprised of the Office of the Chairman and the Board of Directors which "receives substantial input from other senior level executives including senior vice president of human resources" (Tripp et al 2005). The mid-level managers, who oversee and manage the day to day affairs of each specialty retail shop is given enough discretion and power for decision making. Having adopted a market development strategy through franchising, each geographical region is managed by a regional director who is empowered to make important decisions. Thus, with this structure, decision making is faster and relatively less complicated.
The human resource is considered as their competitive advantage. The company has taken effort in training its employees in order to prepare them to the role that they are going to undertake. Starbucks communicates its confidence and pride in its employees by establishing an empowering corporate culture, exceptional monetary and nonmonetary benefits, and employee stock ownership program. The company has also deviated from the traditional paradigm of motivating employees solely through monetary benefits. Starbucks has shifted to emphasize the importance of boosting the company's morale by providing them with their belonging needs.
References
About Us (2007), Starbucks.com, Retrieved 07 May 2007, from http://www.starbucks.com
Tripp, L., et. al. (2005), Industrial to Information Model of Enterprise, Retrieved 20 February 2008, from http://homepages.wmich.edu/v4siwapi/project.htm Read More
Share:
Tags
Cite this document
(“Best Places to Work Essay Example | Topics and Well Written Essays - 500 words”, n.d.)
Best Places to Work Essay Example | Topics and Well Written Essays - 500 words. Retrieved from https://studentshare.org/miscellaneous/1507944-best-places-to-work

CHECK THESE SAMPLES OF Best Places to Work

...ysical, is identified by Google’s HR team as unlawful. Any incident or report is thoroughly investigated and the harassers are dealt with immediately, to the full extent of the company’s strict HR policies on the subject (Google, 2009). Google is a rare company that thrives on its diverse workforce; in fact, they claim to celebrate and support being different. The company recognizes the benefit such support and a positive work environment has on employees, Google products, and the community, in general (Google, 2011b). The likely reason Google appears as fourth on the FORTUNE Magazine 100 Best Places to Work list, is because the company is intentionally different. The organization has successfully bred empowerment and leadership within...
2 Pages(500 words)Assignment

In this context, the Southampton Solent University’s existence as a business organization in the strategic business sense would be defined as a clear attempt at continuously engaging in the present and future activities with a view to achieving its long term objectives of which the satisfaction of stakeholders, particularly shareholders, is of paramount importance. Its mission statement is “The pursuit of inclusive and flexible forms of Higher Education which meet the needs of employers and prepare students to succeed in a fast-...
8 Pages(2000 words)Coursework
sponsored ads
Save Your Time for More Important Things
Let us write or edit the essay on your topic "Best Places to Work" with a personal 20% discount.
GRAB THE BEST PAPER

Let us find you another Essay on topic Best Places to Work for FREE!