Comments (0)
Add to wishlistDelete from wishlist
Cite this document
Summary
Since the last half of the past century, there is greater insight into understand organizational and industry development than was ever before. This was largely due to the fact that the study of behavioral sciences was incorporated into the dynamics of organizational development…
Download full paperFile format: .doc, available for editing
HIDE THIS PAPERGRAB THE BEST PAPER93.3% of users find it useful 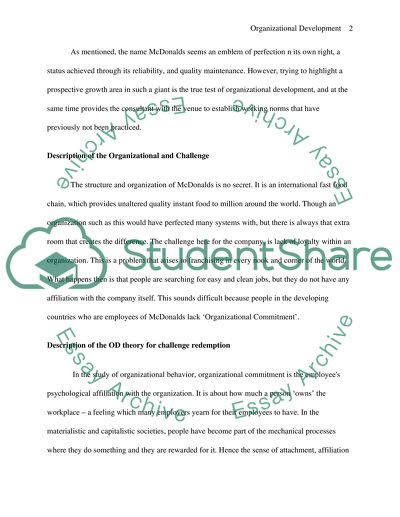 Download file to see previous pages This is essence of organizational development, that no system is perfect, and that there is always room for improvement.
As mentioned, the name McDonalds seems an emblem of perfection n its own right, a status achieved through its reliability, and quality maintenance. However, trying to highlight a prospective growth area in such a giant is the true test of organizational development, and at the same time provides the consultant with the venue to establish working norms that have previously not been practiced.
The structure and organization of McDonalds is no secret. It is an international fast food chain, which provides unaltered quality instant food to million around the world. Though an organization such as this would have perfected many systems with, but there is always that extra room that creates the difference. The challenge here for the company, is lack of loyalty within an organization. This is a problem that arises to franchising in every nook and corner of the world. What happens then is that people are searching for easy and clean jobs, but they do not have any affiliation with the company itself. This sounds difficult because people in the developing countries who are employees of McDonalds lack 'Organizational Commitment'.
In the study of organizational behavior, organizational commi...
Description of the OD theory for challenge redemption
In the study of organizational behavior, organizational commitment is the employee's psychological affiliation with the organization. It is about how much a person 'owns' the workplace - a feeling which many employers yearn for their employees to have. In the materialistic and capitalistic societies, people have become part of the mechanical processes where they do something and they are rewarded for it. Hence the sense of attachment, affiliation and loyalty has almost died out. This is the reason why we see so many cases of job-hopping these days.
Organizational specialists have developed many concepts of organizational commitment, and numerous means of measuring it. The classic work here is of Meyer & Allen, who give the model of commitment, which was created to integrate numerous definitions of commitment that had proliferated in the research literature (1991). They minimized the concept into three mindsets of the employees:
(a) Affective Commitment: This refers to as the employee's emotional attachment to the organization. Consequently, there is strong affiliation between them and the former wishes to remains a ort f the organization. This is not a deliberate, but an unconscious and automatic development of positive feelings towards the company. Mowday, Porter, and Steers's (1982) concept of commitment basically became the foundation of this study.
(b) Continuance Commitment: The individual commits to the organization because there is a perception of high costs of losing organizational membership, including economic losses and social costs that he is not willing to compromise upon. It s an arrangement of compromise, and the employee is working there simply because he 'has to'.
(c) Normative ...Download file to see next pagesRead More
Share:
Tags
Cite this document
(“Organizational Development: Frame Work And Change Essay”, n.d.)
Retrieved from https://studentshare.org/miscellaneous/1507910-organizational-development-frame-work-and-change

CHECK THESE SAMPLES OF Organizational Development: Frame Work And Change

...Climate change Can we imagine an Earth where there are no green mountains, no deep blue seas and no living creatures? No. But a disaster of such magnitude and dimension is looming over Earth. Humans have identified this threat, defined it and given it a name, global warming. This dangerous proposition is based on the truth that even a 5 % increase in the surface temperature on Earth can wipe out life from this beautiful planet. And the temperature is increasing as never before. It was in 1990s that the world began to hear serious warnings on global warming and climate change. The summary for policy makers prepared as part of the first assessment report by Inter-governmental Panel on Climate Change was the first ever in depth study...
6 Pages(1500 words)Literature review
sponsored ads
Save Your Time for More Important Things
Let us write or edit the essay on your topic "Organizational Development: Frame Work And Change" with a personal 20% discount.
GRAB THE BEST PAPER

Let us find you another Essay on topic Organizational Development: Frame Work And Change for FREE!