Comments (0)
Add to wishlistDelete from wishlist
Cite this document
Summary
France is a country with religious freedom and thought, including agnosticism and atheism, and Roman Catholicism is the religion of a majority of French people. The other religions practiced in the country include Protestantism, Islam, Judaism and atheism…
Download full paperFile format: .doc, available for editing
HIDE THIS PAPERGRAB THE BEST PAPER93% of users find it useful 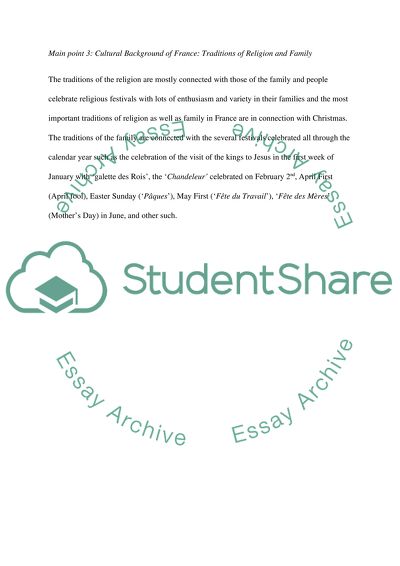 Extract of sample "Religion and Family in France"

Developing an Informative Speech Topic Outline of the major points Thesis: A reflective analysis of the religion, family structure, and traditions of religion and family etc of France can be most useful in comprehending the culture and communication styles of this specific country in detail.
Main point 1: Cultural Background of France: Religion
France is a country with religious freedom and thought, including agnosticism and atheism, and Roman Catholicism is the religion of a majority of French people. . The other religions practiced in the country include Protestantism, Islam, Judaism and atheism. The religious background of France has been prominent throughout the Europe and the world and it is a nation which has contributed the world some of the fundamental principles of secularism and religion including the 'freedom of religion'.
Main point 2: Cultural Background of France: Family structure
A profound analysis of the family structure in France confirms that several social, religious and cultural elements as well as movements have influenced the progress of its culture. The traditional family structure of the French culture, an extended family structure, continued for a long time due, mainly, to the values of the Catholic Church and the rural communities. The French Revolution created a potent space for questioning the customs, laws, emotions, power relations, and gender assumptions that informed family life and it radically redefined the family, its internal dynamics, and its relationship to the state. There has been a vital shift from the traditional family structure to the modern family structure in the French society and culture.
Main point 3: Cultural Background of France: Traditions of Religion and Family
The traditions of the religion are mostly connected with those of the family and people celebrate religious festivals with lots of enthusiasm and variety in their families and the most important traditions of religion as well as family in France are in connection with Christmas. The traditions of the family are connected with the several festivals celebrated all through the calendar year such as the celebration of the visit of the kings to Jesus in the first week of January with 'galette des Rois', the 'Chandeleur' celebrated on February 2nd, April First (April fool), Easter Sunday ('Pques'), May First ('Fte du Travail'), 'Fte des Mres' (Mother's Day) in June, and other such. Read More
Share:
Tags
Cite this document
(“Religion and Family in France Research Proposal Example | Topics and Well Written Essays - 500 words”, n.d.)
Religion and Family in France Research Proposal Example | Topics and Well Written Essays - 500 words. Retrieved from https://studentshare.org/miscellaneous/1507012-religion-and-family-in-france

CHECK THESE SAMPLES OF Religion and Family in France

Yet today there is a tendency for moving from patient-centred model to a family-centred one where family involvement in caregiving is being considered seriously by the h...

Some countries have pushed for an international consensus on issues of concern to all. France, which has suffered severely from the crisis, with an economic contraction and rising unemployment, has tried stand in opposition to the UK and the United States both of which believe minor financial regulations can alter and improve the situation—France would like to see more wide-ranging reforms accomplished through the increased unification of Europe. Efforts to deal with the crisis have led the French government to seek out more partners in Europe and try to push Europe wide reforms and a sort of European (as opposed to American) new capitalism. The government of Sarkozy has criticized British tax cuts and suggested the key to g...
8 Pages(2000 words)Coursework
sponsored ads
Save Your Time for More Important Things
Let us write or edit the research proposal on your topic "Religion and Family in France" with a personal 20% discount.
GRAB THE BEST PAPER

Let us find you another Research Proposal on topic Religion and Family in France for FREE!