Comments (0)
Add to wishlistDelete from wishlist
Cite this document
Summary
Barbara Ehrenheich describes the plight of many Americans as constituting a "state of emergency" (270). She argues, in effect, that a majority of Americans do not earn enough money, that economic statistics support her declaration, and that a failure to remedy this situation may result in a violent uprising…
Download full paperFile format: .doc, available for editing
HIDE THIS PAPERGRAB THE BEST PAPER98.3% of users find it useful 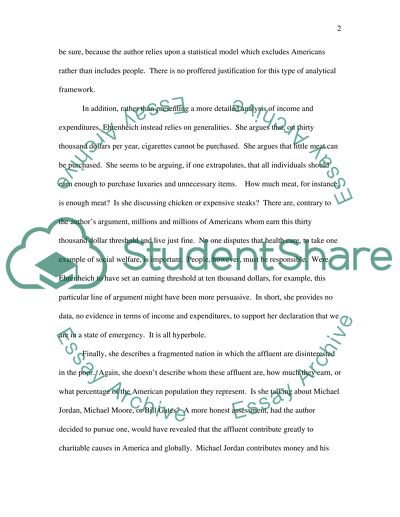 Ehrenheich's of Emergency: Unsubstantiated Scaremongering Barbara Ehrenheich describes the plight of many Americans as constituting a of emergency" (270). She argues, in effect, that a majority of Americans do not earn enough money, that economic statistics support her declaration, and that a failure to remedy this situation may result in a violent uprising. Though a living wage is a relevant issue, and one which needs constant attention, Ehrenheich undermines her argument by relying on spurious evidence. This essay will argue that she presents no valid evidence that America is experiencing a state of emergency. This is because the statistical data which Ehrenheich relies upon is hardly representative, because she provides no detailed data to support her assertion that thirty thousand dollars per year cannot satisfy necessities for an individual, and because she assumes that the affluent are genuinely disinterested in people earning less money than themselves.
As an initial matter, by choosing a statistical model which is based on a single parent with two children, Ehrenheich excludes millions and millions of Americans. She does not explain why this statistical model is chosen. She does not explain whether this model is the dominant demographic reality in America. In short, the reader is left to wonder whether this model has any overall relevance, or whether the author is choosing a statistical context most conducive to her own personal preferences. There is an issue of credibility. Is the author, for instance, appealing to the sympathy vote from single parents in order to prove her alleged state of emergency Does this emotive appeal supersede the broader demographic and statistical realities of working people in America The essay, in the final analysis, is flawed from the beginning; it is flawed, to be sure, because the author relies upon a statistical model which excludes Americans rather than includes people. There is no proffered justification for this type of analytical framework.
In addition, rather than presenting a more detailed analysis of income and expenditures, Ehrenheich instead relies on generalities. She argues that, on thirty thousand dollars per year, cigarettes cannot be purchased. She argues that little meat can be purchased. She seems to be arguing, if one extrapolates, that all individuals should earn enough to purchase luxuries and unnecessary items. How much meat, for instance, is enough meat Is she discussing chicken or expensive steaks There are, contrary to the author's argument, millions and millions of Americans whom earn this thirty thousand dollar threshold and live just fine. No one disputes that health care, to take one example of social welfare, is important. People, however, must be responsible. Were Ehrenheich to have set an earning threshold at ten thousand dollars, for example, this particular line of argument might have been more persuasive. In short, she provides no data, no evidence in terms of income and expenditures, to support her declaration that we are in a state of emergency. It is all hyperbole.
Finally, she describes a fragmented nation in which the affluent are disinterested in the poor. Again, she doesn't describe whom these affluent are, how much they earn, or what percentage of the American population they represent. Is she talking about Michael Jordan, Michael Moore, or Bill Gates A more honest assessment, had the author decided to pursue one, would have revealed that the affluent contribute greatly to charitable causes in America and globally. Michael Jordan contributes money and his time to underprivileged children; Michael Moore donates his time and his films to educational causes; and, as the real evidence proves, Bill Gates, the most affluent man in the world, has established charitable foundations worth billions of dollars. Whom is the author referring to as the affluent She doesn't say, perhaps she doesn't really know herself, and this line of argument also undermines her larger thesis. She has created a framework with no substance. The essay is, in this sense, naked. There is no evidence. It is empty.
In the final analysis, there is no state of emergency that can be predicated on the facts provided by this author. She chooses statistics selectively, which benefit her theory without sampling a larger population. She resorts to generalities rather than specifics, and she relies upon unsubstantiated assumptions about social classes in order to reach her dire conclusions. Without anything more than what has been provided in this essay, it is impossible to accord the author's conclusions any legitimacy. The issues are important, critically important, but the data needs to be presented in a straightforward and objective manner. Scaremongering is irresponsible.

CHECK THESE SAMPLES OF Ehrenheichs State of Emergency: Unsubstantiated Scaremongering

Yet today there is a tendency for moving from patient-centred model to a family-centred one where family involvement in caregiving is being considered seriously by the h...

Let us find you another Essay on topic Ehrenheichs State of Emergency: Unsubstantiated Scaremongering for FREE!