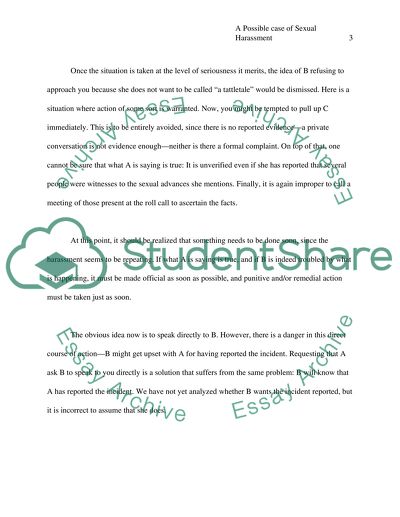 Extract of sample "A Possible case of Sexual Harassment"

Download file to see previous pages "Sexual harassment means unwanted conduct of a sexual nature, or other conduct based on sex affecting the dignity of women and men at work. This can include unwelcome physical, verbal or non-verbal conduct (para 2.1). Thus a range of behaviour may be considered to constitute sexual harassment (para 2.2).
The essential characteristic of sexual harassment is that it is unwanted by the recipient, that it is for each individual to determine what behaviour is acceptable to them and what they regard as offensive. (para 2.3)" (Barry)
Once the situation is taken at the level of seriousness it merits, the idea of B refusing to approach you because she does not want to be called "a tattletale" would be dismissed. Here is a situation where action of some sort is warranted. Now, you might be tempted to pull up C immediately. This is to be entirely avoided, since there is no reported evidence-a private conversation is not evidence enough-neither is there a formal complaint. On top of that, one cannot be sure that what A is saying is true: It is unverified even if she has reported that several people were witnesses to the sexual advances she mentions. Finally, it is again improper to call a meeting of those present at the roll call to ascertain the facts.
At this point, it should be realized that something needs to be done soon, since the harassment seems to be repeating. If what A is saying is true, and if B is indeed troubled by what is happening, it must be made official as soon as possible, and punitive and/or remedial action must be taken just as soon.
The obvious idea now is to speak directly to B. However, there is a danger in this direct course of action-B might get upset with A for having reported the incident. Requesting that A ask B to speak to you directly is a solution that suffers from the same problem: B will know that A has reported the incident. We have not yet analyzed whether B wants the incident reported, but it is incorrect to assume that she does.
A possible workaround is to ask A to make up a story. She could say to B that she approached you about a problem, and that you were sympathetic and helpful-and that you assured her you would keep the matter in strict confidence. This might give B the required confidence to approach you directly.
We must now speak about the protagonist himself. You might have developed a reputation of being unapproachable, or it might be generally believed that you cannot handle a situation in the appropriate manner-which could be why B is afraid of approaching you. If you trust your capabilities, you, as sergeant, could call a general meeting before attempting to resolve B's issue, reassuring everyone in your team that they can approach you with whatever issues they may have, that information will be kept in confidence if required, and so on. Your image in the team needs to be bolstered, and perhaps the most straightforward way to achieve this is to address all team members publicly.
We now turn to officer B. What is ...Download file to see next pagesRead More
Share:
Tags
Cite this document
(“A Possible case of Sexual Harassment Essay Example | Topics and Well Written Essays - 1000 words”, n.d.)
Retrieved from https://studentshare.org/miscellaneous/1506947-a-possible-case-of-sexual-harassment

CHECK THESE SAMPLES OF A Possible case of Sexual Harassment

In th...
8 Pages(2000 words)Case Study
sponsored ads
Save Your Time for More Important Things
Let us write or edit the essay on your topic "A Possible case of Sexual Harassment" with a personal 20% discount.
GRAB THE BEST PAPER

Let us find you another Essay on topic A Possible case of Sexual Harassment for FREE!