Comments (0)
Add to wishlistDelete from wishlist
Cite this document
Summary
The kingdom Animalia consists of over thirty different major phyla including Mollusca,Arthropoda,Cnidaria, and Chordata.The Chordates are the ones that are most popularly thought of as animals,but insects and mollusk-like creatures are just as much an animal as a koala bear and giraffe…
Download full paperFile format: .doc, available for editing
HIDE THIS PAPERGRAB THE BEST PAPER91.7% of users find it useful 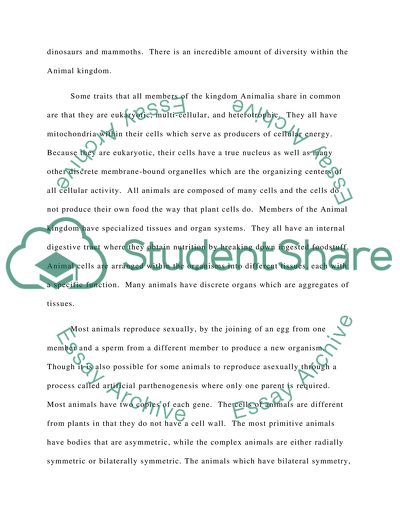 Extract of sample "Characteristics of the Kingdom Animalia"

Characteristics of the Kingdom Animalia The kingdom Animalia consists of over thirty different major phyla including Mollusca, Arthropoda,Cnidaria, and Chordata. The Chordates are the ones that are most popularly thought of as animals, but insects and mollusk-like creatures are just as much an animal as a koala bear and giraffe. Interestingly, the insects make up 87% of all the animal species on the planet. Members of the group Chordata are indeed special within the Animal kingdom though. They have in common five unique characteristics which distinguish them from other animals. At some point during their development Chordates have the following body structures: a notochord, gills, a hollow nerve cord, a tail past the anus, and a digestive tube behind the mouth. All animals have the ability to move around at a relatively rapid pace because of the presence of muscle tissue within their anatomy. In contrast members of the plant kingdom are generally rooted to one spot during their entire adult life.
The Animal kingdom contains more members than any other kingdom with likely over a million different species on the planet. They range in size from just a few cells to whale-sized. Most of the animals on the earth live in the sea, some live in fresh water, and the smallest percentage of the Animal kingdom live on land. The Animal kingdom includes all amphibians, birds, bugs, fish, invertebrates, mammals, reptiles, and even prehistoric creatures such as dinosaurs and mammoths. There is an incredible amount of diversity within the Animal kingdom.
Some traits that all members of the kingdom Animalia share in common are that they are eukaryotic, multi-cellular, and heterotrophic. They all have mitochondria within their cells which serve as producers of cellular energy. Because they are eukaryotic, their cells have a true nucleus as well as many other discrete membrane-bound organelles which are the organizing centers of all cellular activity. All animals are composed of many cells and the cells do not produce their own food the way that plant cells do. Members of the Animal kingdom have specialized tissues and organ systems. They all have an internal digestive tract where they obtain nutrition by breaking down ingested foodstuff. Animal cells are arranged within the organisms into different tissues, each with a specific function. Many animals have discrete organs which are aggregates of tissues.
Most animals reproduce sexually, by the joining of an egg from one member and a sperm from a different member to produce a new organism. Though it is also possible for some animals to reproduce asexually through a process called artificial parthenogenesis where only one parent is required. Most animals have two copies of each gene. The cells of animals are different from plants in that they do not have a cell wall. The most primitive animals have bodies that are asymmetric, while the complex animals are either radially symmetric or bilaterally symmetric. The animals which have bilateral symmetry, i.e. a right side that is closely identical to the left side, also have the specialized feature of cephalization which is a head containing sensory organs.
References
Kingdom Animalia (2009).
angelfire.com. Referenced 23 April 2009
Kingdom Animalia, Characteristics of Animals (2009).
Characteristics_of_animals.pdf. Referenced 23 April 2009
Animals (2009).
nationalgeographic.com. Referenced 23 April 2009
< http://animals.nationalgeographic.com/animals >Read More
Share:
Tags
Cite this document
(“Characteristics of the Kingdom Animalia Essay Example | Topics and Well Written Essays - 500 words”, n.d.)
Retrieved from https://studentshare.org/miscellaneous/1506773-characteristics-of-the-kingdom-animalia

CHECK THESE SAMPLES OF Characteristics of the Kingdom Animalia

Yet, more and more studies have shown that binge drinking, particularly in underage drinkers, is becoming a growing problem. Binge and underage drinking could affect Larghall Leisure Ltd.’s pub licenses for a couple of reasons.
A proposal to impose a forty-eight-hour ban on any pub consistently caught supplying alcohol to underage drinkers has been initiated (Great Britain 2005). Pubs will also need to have a drug policy by April 2006. The license council and police will inspect the pubs more frequently. There is also a new ban on irresponsible drink promotions and low priced promotions (Great Britain 2005). These new laws might have far-reaching implications on Larkhall Leisure Ltd.’s pubs.
The need ha...

Globally, it is still not very clear on, which policy to perceive best in controlling the economic crisis in the country, but the United Kingdom has opted to regulate government expenses as an alternative to improve economic returns of the nation (Tanzi and Schuknecht 45). The research paper, therefore, is meant to determine if the policy to control government expenditure is critical to economic development in the United Kingdom.
Despite the fact some of the economists are skeptical that government expense regulation policies are vulnerable to a reduction in total revenue collection, it has been pointed out that such a policy is very effective in ensuring that a nation achieves its optimum goal by reducing its level of borrow...
7 Pages(1750 words)Assignment
sponsored ads
Save Your Time for More Important Things
Let us write or edit the essay on your topic "Characteristics of the Kingdom Animalia" with a personal 20% discount.
GRAB THE BEST PAPER

Let us find you another Essay on topic Characteristics of the Kingdom Animalia for FREE!