Comments (0)
Add to wishlistDelete from wishlist
Cite this document
Summary
My personal counselling theory is comprised of Albert Ellis' rational emotive behavioral therapy (REBT) and Alfred Adler's individual psychology. I will identify and justify the theoretical frameworks of both theories. My personal way of understanding and describing the human condition and facilitating change also will be discussed…
Download full paperFile format: .doc, available for editing
HIDE THIS PAPERGRAB THE BEST PAPER91.8% of users find it useful 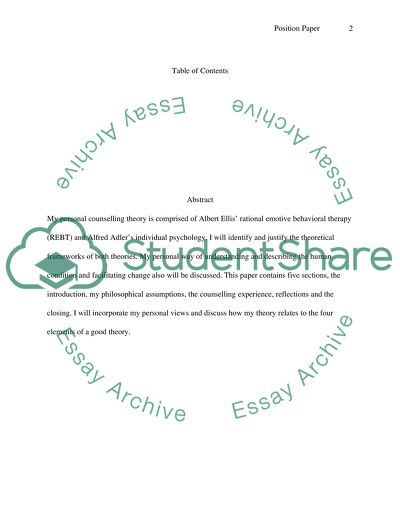 Download file to see previous pages Based on these 13 dominant counselling theories, I have formed my own personal counselling framework. My personal counselling theory is comprised of two of these dominant theories: Albert Ellis' rational emotive behavioral therapy (REBT) and Alfred Adler's individual psychology. These two theories hold similar viewpoints in regard to defining, describing, identifying, explaining, and changing behavior.
The context of both theories explained by Mosak and Ellis (as cited in Corsini & Wedding, 2005) stressed that Ellis believed emotional disturbances resulted by the person's view on the situation, and that his type of therapy, the therapeutic process, with one main intervention technique would change irrational beliefs into rational ones. Adler, also believed emotional disturbances resulted by inferiority feelings and his type of therapy, individual psychology, with various intervention techniques would encourage social interest.
According to the "Nature of Theory" (n.d.) article there are four primary elements of a good theory: Philosophical, descriptive, prescriptive and evaluative elements. This paper will examine each element in regard to Adler's and Ellis' theories concluding with my personal views. This paper will identify and justify the theoretical frameworks that make sense to me and will integrate them into a cohesive personal theory. My personal way of understanding and describing the human condition and facilitating change will also be discussed. More specifically, this paper contains five sections, the introduction, the philosophical assumptions, the counselling experience, reflections and the closing.
The First section, the philosophical assumptions, will discuss my philosophical assumptions as it relates to my theory. I will provide my personal views on the nature of humans, the nature of well adjusted functioning, the major causes of the problems, and the nature of change. I will incorporate my theories view on each level, and discuss how it relates to the four elements of a good theory. The second section, the counselling experience is comprised of two topics: my definition of counselling, and the process of beliefs limited to the counsellor client relationship. The first topic will include my original and revised definition of counselling. The second topic will be broken down into six subsections including counsellor and client roles, session structure, emphasis on past, present and future, emphasis on beliefs, the relationship of behaviors and emotions, the change process including resistance, interventions, the criteria and definition of success and contextual factors. In the six subsections, I will incorporate my personal beliefs and reflections including strengths and weakness I may have in the area, my personal counselling theories stance in that area, and how it relates to the elements of a good theory. The third section will reflect on the limitations of my personal theory and explain why I am drawn to this theory from a professional and personal context. The last section will ...Download file to see next pagesRead More
Share:
Tags
Cite this document
(“Psychology. Creating a Personal Counselling Theory Essay”, n.d.)
Psychology. Creating a Personal Counselling Theory Essay. Retrieved from https://studentshare.org/miscellaneous/1506562-psychology-creating-a-personal-counselling-theory

CHECK THESE SAMPLES OF Psychology. Creating a Personal Counselling Theory

... Counselling Psychology Introduction The traditional idea of a psychotherapist given by the popular media and literature may not be exactly right since there are several different kinds of therapies that may be given by a psychologist depending on the needs of the individual. Two common therapies used in the field are the person centred therapy and the psychodynamic therapy and both have their uses and application when it comes to providing treatment. An understanding of these therapies is important for all students of psychology and especially for those who want to be active in the field itself. Person Centred Therapy Person centred therapy is closer to being a pure form of therapy as compared to psychodynamic therapy. The credit...
4 Pages(1000 words)Essay

...Management Theory and Practice in the early childhood education industry This Report applies management theory into practice in the early childhood industry, especially in the context of women leaders. Management issues play a significant role in the academic sector, because early childhood professionals need higher levels of motivation in order to avoid burnout . As pointed out in a study by Osgood and Halsall (2007) where they carried out research to examine the position of women in leadership or management positions, a “glass ceiling” exists for women in the academic setting, which could significantly impair motivation. Since many of the individuals employed in the early education sector are women, addressing this issue is even more...
6 Pages(1500 words)Coursework
sponsored ads
Save Your Time for More Important Things
Let us write or edit the essay on your topic "Psychology. Creating a Personal Counselling Theory" with a personal 20% discount.
GRAB THE BEST PAPER

Let us find you another Essay on topic Psychology. Creating a Personal Counselling Theory for FREE!