Comments (0)
Add to wishlistDelete from wishlist
Cite this document
Summary
International academic assessments like "The Progress in International Reading Literacy Study "(PIRLS) and the "Programme for International Student Assessment "(PISA), confirm what educators around the world have suspected for a while now. Boys do not perform as well as girls in reading and writing (Ontario Education 2004, p.4)…
Download full paperFile format: .doc, available for editing
HIDE THIS PAPERGRAB THE BEST PAPER98.7% of users find it useful 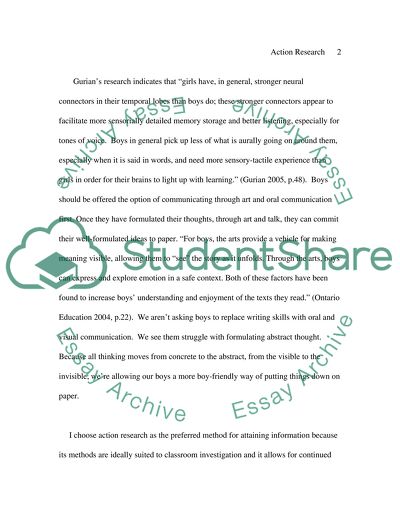 Download file to see previous pages Michael Gurian, author of The Minds of Boys. Saving Our Sons from Falling Behind in School and Life, and founder of the Gurian Institute has concluded, after 20 years of research (Gurian 2005, p. 9), that there is a "crisis that many boys experience in our educational culture today" (Gurian 2005, p..9). Gurian's scientific research shows that boys learn differently than girls in five significant ways. They learn through sensory-tactile experiences, by attaching learning to physical movement, by chunking or attacking one task at a time, by organizing information into groups, lists or sub-groups, and by exercising their need to physically move between tasks (Gurian 2005, p. 48). I intend to address one of the gender-based differences through an action research proposal which asks the question: Can Art be effectively incorporated into cross-curricular foundation subjects as outlined by the National Strategy, to increase oral communication and literacy skills in boys.
Gurian's research indicates that "girls have, in general, stronger neural connectors in their temporal lobes than boys do; these stronger connectors appear to facilitate more sensorially detailed memory storage and better listening, especially for tones of voice. Boys in general pick up less of what is aurally going on around them, especially when it is said in words, and need more sensory-tactile experience than girls in order for their brains to light up with learning." (Gurian 2005, p.48). Boys should be offered the option of communicating through art and oral communication first. Once they have formulated their thoughts, through art and talk, they can commit their well-formulated ideas to paper. "For boys, the arts provide a vehicle for making meaning visible, allowing them to "see" the story as it unfolds. Through the arts, boys can express and explore emotion in a safe context. Both of these factors have been found to increase boys' understanding and enjoyment of the texts they read." (Ontario Education 2004, p.22). We aren't asking boys to replace writing skills with oral and visual communication. We see them struggle with formulating abstract thought. Because all thinking moves from concrete to the abstract, from the visible to the invisible, we're allowing our boys a more boy-friendly way of putting things down on paper.
I choose action research as the preferred method for attaining information because its methods are ideally suited to classroom investigation and it allows for continued
Action Research 3
professional development, not only throughout the research period, but also in a continuous manner thereafter. Cohen and Manion describe it as "an on-the-spot procedure designed to deal with a concrete problem located in an immediate situation. This means that ideally, the step-by-step process is constantly monitored over varying periods of time and by a variety of mechanisms (questionnaires, diaries, interviews and case studies, for example) so that the ensuing feedback may be translated into modifications, adjustments, directional changes, redefinitions, as necessary, so as to bring about lasting benefit to the ongoing process itself rather than to some future occasion" (Cohen and Manion 1994, p. ...Download file to see next pagesRead More
Share:
Tags
Cite this document
(“The Professional Studies 2 Task Research excercise Essay”, n.d.)
The Professional Studies 2 Task Research excercise Essay. Retrieved from https://studentshare.org/miscellaneous/1506539-the-professional-studies-2-task-research-excercise

CHECK THESE SAMPLES OF The Professional Studies 2 Task Research excercise

13 Pages(3250 words)Assignment
sponsored ads
Save Your Time for More Important Things
Let us write or edit the essay on your topic "The Professional Studies 2 Task Research excercise" with a personal 20% discount.
GRAB THE BEST PAPER

Let us find you another Essay on topic The Professional Studies 2 Task Research excercise for FREE!