Comments (1)
Add to wishlistDelete from wishlist
Cite this document
Summary
Personality is that which makes individuals distinctively themselves. It is the stuff of biographers, playwrights and historians, but also of scientists and lay speculators. In a sense, we are all personality theorists. It is a difficult, multidisciplinary area of research…
Download full paperFile format: .doc, available for editing
HIDE THIS PAPERGRAB THE BEST PAPER96% of users find it useful 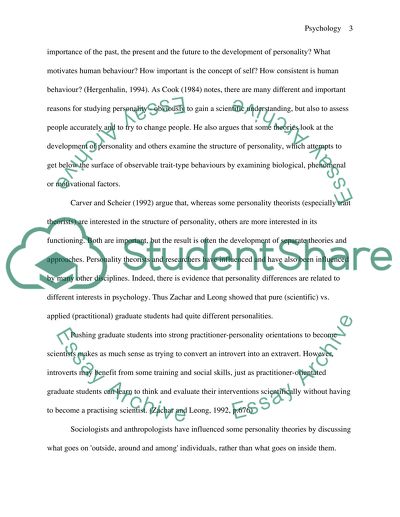 Download file to see previous pages The types of questions asked by lay people include the following. What is a personality clash Do people with opposite personalities find each other attractive Can someone have little or no personality Academic questions are also of interest to the lay person, and might include the following. Does personality change much over time What causes (shapes, determines) an individual's personality What are the fundamental dimensions of personality To what extent do personality differences (alone) determine such things as health What causes a person to be an introvert or extravert (more likely an ambivert) Can neurotics be cured effectively
Personality psychology is often a child of its investigative method. The couch and the laboratory use different methods, and hence develop different concepts and theories of personality. Personality psychologists, unlike many of their biological and cognitive colleagues, are often 'whole-person' psychologists, not focusing exclusively on beliefs, emotions or cognitions. Many have tended to ask 'big' questions, such as the following. What is the relative importance of the past, the present and the future to the development of personality What motivates human behaviour How important is the concept of self How consistent is human behaviour (Hergenhalin, 1994). As Cook (1984) notes, there are many different and important reasons for studying personality - obviously to gain a scientific understanding, but also to assess people accurately and to try to change people. He also argues that some theories look at the development of personality and others examine the structure of personality, which attempts to get below the surface of observable trait-type behaviours by examining biological, phenomenal or motivational factors.
Carver and Scheier (1992) argue that, whereas some personality theorists (especially trait theorists) are interested in the structure of personality, others are more interested in its functioning. Both are important, but the result is often the development of separate theories and approaches. Personality theorists and researchers have influenced and have also been influenced by many other disciplines. Indeed, there is evidence that personality differences are related to different interests in psychology. Thus Zachar and Leong showed that pure (scientific) vs. applied (practitional) graduate students had quite different personalities.
Pushing graduate students into strong practitioner-personality orientations to become scientists makes as much sense as trying to convert an introvert into an extravert. However, introverts may benefit from some training and social skills, just as practitioner-orientated graduate students can learn to think and evaluate their interventions scientifically without having to become a practising scientist. (Zachar and Leong, 1992, p.676)
Sociologists and anthropologists have influenced some personality theories by discussing what goes on 'outside, around and among' individuals, rather than what goes on inside them. Lately, however, it has been biologists and geneticists whose ideas and discoveries have most influenced personality research. Certainly this trend looks likely to continue. Behaviour genetics, cognitive neuropsychology and multivariate statistics probably represent the most influential contributions to the discipline at the moment (see Section 1.11).
Personality psychology aims to provide viable ...Download file to see next pagesRead More
Share:
Tags
Cite this document
(“Psychology (Personality) Essay Example | Topics and Well Written Essays - 2000 words”, n.d.)
Psychology (Personality) Essay Example | Topics and Well Written Essays - 2000 words. Retrieved from https://studentshare.org/miscellaneous/1506286-psychology-personality

ta
tamia26 added comment 4 months ago
Student rated this paper as
The topic of "Psychology (Personality)" is quite popular among the assignments in high school. Still, this document opens a new perspective of seeing the problem. I’ll use the manner for my own essay.

CHECK THESE SAMPLES OF Psychology (Personality)

Sales promotion includes such activities as setting up store displays, holding Trade Shows, and distributing samples, premiums, and coupons. There are several factors that point to the need for promotion today. In the first place, as the distance between producers and consumers increases and the number of potential customers grows, the problem of market communication becomes significant.
There are Five different methods which are adopted for promotion, that are (1) Public Relations (2) Advertising (3) Publicity (4) Sales Promotion (5) Personal selling. The decision of the Promotional mix is related to budget availability for funds promotion, nature of the market and the product and the stage of the product life cycle.
Ad...
6 Pages(1500 words)Assignment

Motivation is one of the most frequently researched topics in organizational behavior. Motivation can be defined as “the processes that account for an individual’s intensity, direction, and persistence of effort toward attaining a goal”Motivated individuals stay with a task long enough to achieve their goal. Process of Motivation start from Needs (desires or wants), Drive / goal directed behavior, Goal and incentives / reliefs. Basically if individuals need for achievement, need for power and need for affiliation fulfills, then a person may be motivated and persistently work to achieve the goals (McClelland, 1961). Persons will be motivated enough to exert a high level of effort and goal directed behavior if he o...
14 Pages(3500 words)Assignment

Humans were born with the capacity to know and the freedom to choose between good and evil.  Given this freedom, we are responsible for our decisions, actions, and thoughts. Consequently, there is a need for therapy when an individual is unable or unwilling to accept personal responsibility for emotional problems.   We are not perfect therefore we make imperfect decisions. Therapy in this integrative approach attempts to get the client to live at peace with themselves in spite of mistakes. However, the level of peace depends on the extent to which one allows the environment to influence one’s inner world. Individuals, therefore, have the capability to improve themselves. Nonetheless, we have the tendency to develop...
6 Pages(1500 words)Assignment
sponsored ads
Save Your Time for More Important Things
Let us write or edit the essay on your topic "Psychology (Personality)" with a personal 20% discount.
GRAB THE BEST PAPER

Let us find you another Essay on topic Psychology (Personality) for FREE!