Comments (0)
Add to wishlistDelete from wishlist
Cite this document
Summary
The purpose of this material is to describe in full detail the steps one should follow in order to listen to a certain mp3 file (or, simply put, a song), from the primary steps of searching for a media player to the actual playing of that particular song. Here are, listed in their logical order, all the steps:
…
Download full paperFile format: .doc, available for editing
HIDE THIS PAPERGRAB THE BEST PAPER96.9% of users find it useful 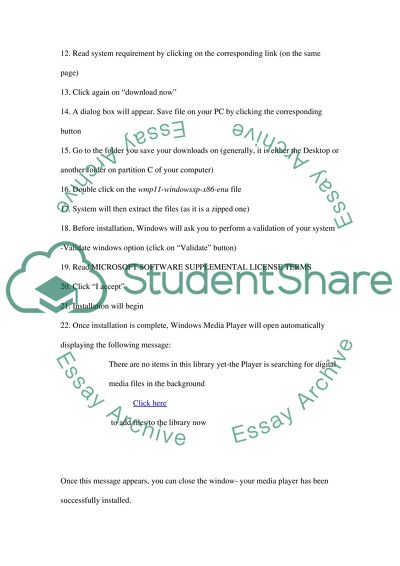 The purpose of this material is to describe in full detail the steps one should follow in order to listen to a certain mp3 file (or, simply put, a song), from the primary steps of searching for a media player to the actual playing of that particular song. Here are, listed in their logical order, all the steps:
1. Open an internet blank page
2. In the address field, type www.google.com
3. Search for windows media player, by typing "windows media player" expression in the search engine's search field and clicking on "Google Search button"
4. A list of the most popular results will appear; among them, look for the official site of the company you are looking for (in our case, Windows Media Player webpage)
5. This is exactly the first link listed by the google search, so simply click on it :http://www.microsoft.com/windows/windowsmedia/default.mspx
6. On the landing page, look for appropriate player for your computer (depending on your PC system)
7. Click on "download player 11 for Windows XP" (if you use Windows Vista the process will still remain the same)
8. Read software description overview (to check if it is really what you wish to have as a player)
9. Click on "download now" button
10. That will bring you to this page http://www.microsoft.com/windows/windowsmedia/player/download/download.aspx
11.Read the detailed software description
12. Read system requirement by clicking on the corresponding link (on the same page)
13. Click again on "download now"
14. A dialog box will appear. Save file on your PC by clicking the corresponding button
15. Go to the folder you save your downloads on (generally, it is either the Desktop or another folder on partition C of your computer)
16. Double click on the wmp11-windowsxp-x86-enu file
17. System will then extract the files (as it is a zipped one)
18. Before installation, Windows will ask you to perform a validation of your system -Validate windows option (click on "Validate" button)
19. Read MICROSOFT SOFTWARE SUPPLEMENTAL LICENSE TERMS
20. Click "I accept"
21. Installation will begin
22. Once installation is complete, Windows Media Player will open automatically displaying the following message:
There are no items in this library yet-the Player is searching for digital media files in the background
Click here
to add files to the library now
Once this message appears, you can close the window- your media player has been successfully installed.
Let us suppose now that you want to listen to a certain song - take, for example, Honeyroot' s Sweet as honey song.
Start a new google search, following the first two steps mentioned above and type in "honeyroot sweet as honey mp3 download"
1. A list of links will appear; click on the first link listed on the page, (http://www.google.com/searchhl=en&q=honeyroot+sweet+as+honey+mp3+download&btnG=Search) as by its displayed text it is, most probably what you are looking for
2. On the landing page, follow the instructions listed under "download now", (Right click, "Save Target As")
3. The mp3 file will be downloaded to your computer.
4. Go to the folder you save your downloads on
5. Right click on the mp3 file
6. Select open with
7. Select Windows Media Player
8. Press on the arrow at the bottom of the opened application to listen to your song. Read More
Share:
Tags
Cite this document
(“Schools and society 601.4 404 Essay Example | Topics and Well Written Essays - 500 words”, n.d.)
Schools and society 601.4 404 Essay Example | Topics and Well Written Essays - 500 words. Retrieved from https://studentshare.org/miscellaneous/1506080-schools-and-society-6014-404

... the following states: New Hampshire, Vermont and Rhode Island. According to the department of education website, its main objective is to assess reading, writing and mathematics from grades 3-8. The third document is the Common Core Standards which is actually a set of core academic standards for mathematics and English Language Arts. Unlike NECAP, literacy in the following areas were also addressed by the core standards: history/social studies, science and technical subjects. In fact, Maine has already been implementing this set of core standards since last school year. The first document is Maine’s Initial Certification Standards. The document is in a pdf format and serves as a quick reference for those who are interested in acquiring...
3 Pages(750 words)Essay

...Running Head: Business Sustainability & Society Business Sustainability & Society [Institute’s Business Sustainability & Society Introduction Since centuries, ethics has been a crucial and significant component of the human societies that contributed enormously in the creation of norms and values through religious influences, as well as through contribution of intellectuals and philosophers in the society. Unfortunately, nowadays, it is an observation that individuals, organizations, and even nations have commenced to overlook the phenomenon of ethics in their practices, specifically in the business sector that has become the major stakeholder confronting criticisms related to ethical practices. Critics (Crane, pp. 23-29, 2007) argue...
10 Pages(2500 words)Case Study
sponsored ads
Save Your Time for More Important Things
Let us write or edit the essay on your topic "Schools and society 601.4 404" with a personal 20% discount.
GRAB THE BEST PAPER

Let us find you another Essay on topic Schools and society 601.4 404 for FREE!