Comments (0)
Add to wishlistDelete from wishlist
Cite this document
Summary
Children who have been severely neglected and/or abused can be helped to cope with their past and current experiences through the use of the small group. Major social, behavioral, and personality characteristics of physically abused children are identified and special adjustments and modifications of the group can be described and worked out as they are identified and as they occur in the group setting.
…
Download full paperFile format: .doc, available for editing
HIDE THIS PAPERGRAB THE BEST PAPER92.8% of users find it useful 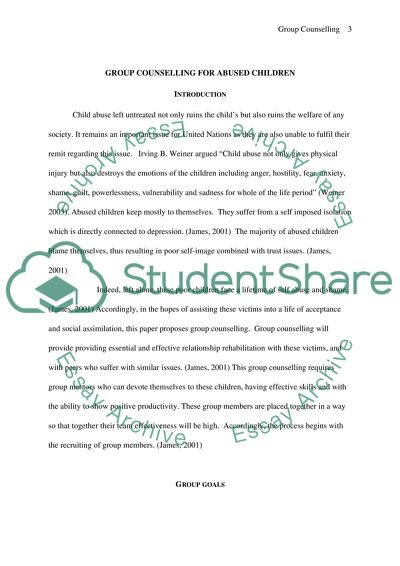 Download file to see previous pages Abused children keep mostly to themselves. They suffer from a self imposed isolation which is directly connected to depression. (James, 2001) The majority of abused children blame themselves, thus resulting in poor self-image combined with trust issues. (James, 2001)
Indeed, left alone, these poor children face a lifetime of self abuse and shame. (James, 2001) Accordingly, in the hopes of assisting these victims into a life of acceptance and social assimilation, this paper proposes group counselling. Group counselling will provide providing essential and effective relationship rehabilitation with these victims, and with peers who suffer with similar issues. (James, 2001) This group counselling requires group mentors who can devote themselves to these children, having effective skills and with the ability to show positive productivity. These group members are placed together in a way so that together their team effectiveness will be high. Accordingly, the process begins with the recruiting of group members. (James, 2001)
According to William James' view "A therapeutic relationship with these abuse children is the group main goal" (James, 2001). The group goal is to establish a safe environment for the children in which these children feel free to discuss their issues, feel risk free and can enhance their personality. The objective is to empower the children and to augment their sense of self. The group is allowed to enhance their personality in way that they can start their life with positive thinking and having enough courage and power to start their life. The group will end when it is felt that they have achieved the objectives for which the group was organized. (James, 2001)
Setting up the group
Screening
Group screening involves the recruitment of members according to their age, physical size and gender to provide a most balance group for the abuse children. The group screening mainly depends on the following issues :
1. Either the child is abused recently or it happened few days before
2. Either the child is highly disturbed with the event or not
3. Either the child has serious psychiatric disturbance or not like he might commit suicide
4. Is the child abuse more than one time
All these issues must be taken in account while screening process. These all issues inform you that what type of balanced group you should adopt for group counselling.
Parent of Legal Guardian Consent
The consent of parent and guardian is taken in different ways; either the letter is send to them or we will meet them physically to get their permission. Usually the letter format is send to these papers showing a detail about this group counselling. Their objectives as what type of relation they will show and what type of after affects will incur. The detail of whole process and steps will be provided to the parents or guardian so that they can understand the major objectives of this group counse ...Download file to see next pagesRead More
Share:
Tags
Cite this document
(“Develop a group proposal for a group of children who have been abused Essay”, n.d.)
Develop a group proposal for a group of children who have been abused Essay. Retrieved from https://studentshare.org/miscellaneous/1506070-develop-a-group-proposal-for-a-group-of-children-who-have-been-abused

“Develop a Group Proposal for a Group of Children Who Have Been Abused Essay”, n.d. https://studentshare.org/miscellaneous/1506070-develop-a-group-proposal-for-a-group-of-children-who-have-been-abused.
Comments (0)
Click to create a comment or rate a document

Analysis of Richard Wright's The Man Who Lived Underground

The protagonist of this story, Fred Daniels, is accused of a murder that he did not commit and, therefore, is forced to inhabit the underworld, where he does not want to live. This is highly symbolic of how African Americans have been treated in society throughout history, as they have been forced out of the conscience of the country as a whole and pushed into ghettos where their stereotypes continue to evolve. Daniels is the personification of Wright’s ideas on American society and its attitudes towards American Americans in general. The fact that he is forced to run underground because of the charges against him shows that he does not believe that he will be given a fair trial. He knows that his only chance for survival is...
6 Pages(1500 words)Book Report/Review

Angelica (2004), on the contrary, says that nonprofit organizations are financially dependent on government grants and contributions from individuals and corporations. Through collaboration, nonprofit organizations are now becoming more business-like. Although they have the status of nonprofit that provides the most services at the least possible price (Shim & Siegel, 1997), they operate in a business-like manner as said by Nadder. But they still have some distinction from the for-profit ente...

The decentralized form of the homeschooling populace limits the ability of researchers to outline conclusions on the precise effect of homeschooling on diverse outcome measures like an academic achievement (Ray). Nevertheless, assessments of homeschooled children have claimed that these students do well in that educational environment. In addition, a survey of homeschooled adults implies that homeschooling ushers in positive outcomes such as improved college enrollment and attendance.
Historically, homeschooling has been a key means for parents to offer education to their children. Most of the Founding Fathers of America went through this form of education, including Thomas Jefferson and George Washington (Coulson 120). With...
11 Pages(2750 words)Case Study
sponsored ads
Save Your Time for More Important Things
Let us write or edit the essay on your topic "Develop a group proposal for a group of children who have been abused" with a personal 20% discount.
GRAB THE BEST PAPER

Let us find you another Essay on topic Develop a group proposal for a group of children who have been abused for FREE!