Comments (0)
Add to wishlistDelete from wishlist
Cite this document
Summary
Marriage is recognized by civil authority and religious beliefs as a relationship among individuals. It has both the legally bidding contract and a moral promise. In western world, marriage has traditional been monogamous while other parts of the world there is polygamous marriage…
Download full paperFile format: .doc, available for editing
HIDE THIS PAPERGRAB THE BEST PAPER94.3% of users find it useful 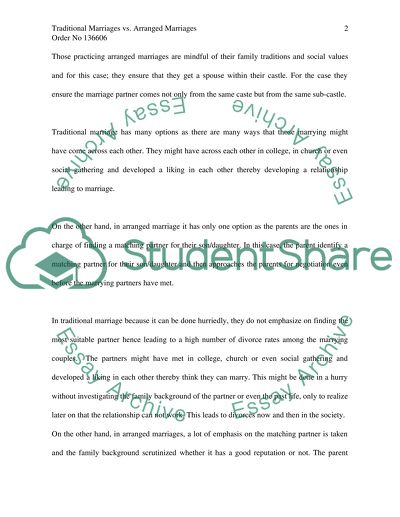 Download file to see previous pages In this type of marriage, the individuals do not value their traditions and can adopt any lifestyle provided they are comfortable with it.
On the other hand, in arranged marriages, the individuals do value their traditions of family and social life; hence there is restriction as to whom they should marry. This kind of marriage is very common in Middle East and part of Asia and Africa. It is also very common among the royal families and unification movement.
Those practicing arranged marriages are mindful of their family traditions and social values and for this case; they ensure that they get a spouse within their castle. For the case they ensure the marriage partner comes not only from the same caste but from the same sub-castle.
Traditional marriage has many options as there are many ways that those marrying might have come across each other. They might have across each other in college, in church or even social gathering and developed a liking in each other thereby developing a relationship leading to marriage.
On the other hand, in arranged marriage it has only one option as the parents are the ones in charge of finding a matching partner for their son/daughter. In this case, the parent identify a matching partner for their son/daughter and then approaches the parents for negotiation even before the marrying partners have met.
In traditional marriage because it can be done hurriedly, they do not emphasize on finding the most suitable partner hence leading to a high number of divorce rates among the marrying couples. The partners might have met in college, church or even social gathering and developed a liking in each other thereby think they can marry. This might be done in a hurry without investigating the family background of the partner or even the past life, only to realize later on that the relationship can not work. This leads to divorces now and then in the society.
On the other hand, in arranged marriages, a lot of emphasis on the matching partner is taken and the family background scrutinized whether it has a good reputation or not. The parent take time before they can finally approve that the partner can marry their son/daughter and then give a go ahead their daughter/son to meet. In these situations, these individuals have so much faith with their parents such that they would not like to disappoint them; hence they ensure the marriage last. The couple respect each other and they always know that their parent have chosen the best partner for them.
In traditional marriages, the marrying partners have a variety of people and lifestyle to choose on terms of marriage partners. For this case, they are free to marry from anyone they feel they can cope with. This is unlike in arranged marriage whereby the parent chooses the partner for their son/daughter hence no freedom at all in terms of choosing a partner in terms of likeness of lifestyle.
In arranged marriages, the parents have to look at so many factors before they approves that the partner can fit in their family or not. Some of the factors they do consider are the family background, education, social life, age, height and beauty. For this case, t ...Download file to see next pagesRead More
Share:
Tags
Cite this document
(“Traditional Marriages vs. Arranged Marriages Essay”, n.d.)
Traditional Marriages vs. Arranged Marriages Essay. Retrieved from https://studentshare.org/miscellaneous/1505762-traditional-marriages-vs-arranged-marriages

CHECK THESE SAMPLES OF Traditional Marriages vs. Arranged Marriages

The above case points at the numerous clauses, which the courts can turn to when ruing on cases pertaining to plural marriages. The above ruling was an indication of the changing attitude of the justice system towards peculiar groups and plural marriages. The existence of the equal protection clause provides an opportunity through which laws against polygamy or same-sex unions may be challenged.
There are several types of marriages, which include heterogeneous and homogeneous marriages. Plural marriages predominantly refer to a marriage where one male partner is union with more than one female partner (Seamon 11). Essentially, this type of union refers to polygamy. This form of marriage is widely unpopular in North America an...
6 Pages(1500 words)Assignment

The main differences between the approaches made by American society and the Barbarian society were the purpose behind the invasions. The American society invaded Afghanistan after facing violent attacks from the Islamic anti-social groups. However, the Barbarian invasions in Rome signified the use of power by the leaders in order to capture territories and increase their kingdom. The main purpose behind the attacks made by the U.S. administration was to eliminate the terrorist groups from the world and make the world free f...
10 Pages(2500 words)Essay
sponsored ads
Save Your Time for More Important Things
Let us write or edit the essay on your topic "Traditional Marriages vs. Arranged Marriages" with a personal 20% discount.
GRAB THE BEST PAPER

Let us find you another Essay on topic Traditional Marriages vs. Arranged Marriages for FREE!