Comments (0)
Add to wishlistDelete from wishlist
Cite this document
Summary
With increased competition in world airlines, Air Arabia, the first in the Middle East to offer low fares, has benefited from their decision to enter the low-cost market. However, because of growing competition by other airlines now offering low fares-namely, Jazeera, Sama and Nas Air, Air Arabia must find new ways of decreasing their costs in order to offer the lowest prices (Zawya)…
Download full paperFile format: .doc, available for editing
HIDE THIS PAPERGRAB THE BEST PAPER92.2% of users find it useful 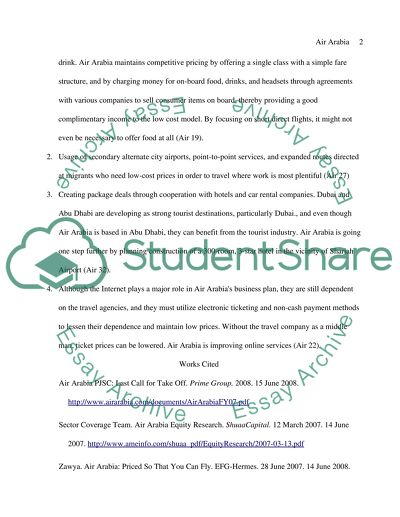 15 June 2008 Possible Problems in Air Arabia's Future With increased competition in world airlines, Air Arabia, the first in the Middle East to offer low fares, has benefited from their decision to enter the low-cost market. However, because of growing competition by other airlines now offering low fares-namely, Jazeera, Sama and Nas Air, Air Arabia must find new ways of decreasing their costs in order to offer the lowest prices (Zawya). The growing credit crunch and yet higher fuel prices are predicted to cause a downturn in the airline industry for 2008 after a profit was finally realized in 2007. The airlines will therefore be forced to improve efficiency (Air 22).
Much of the air traffic activity in the Middle East is from the U.S. and Europe tourist trade, where travelers are more affected by high oil prices than are local travelers. Low-cost airlines have been able to supply routes previously unserved or underserved by traditional network airlines, with local customers taking advantage of low cost. What are the factors that allow an airline to compete successfully with ticket prices It is necessary for an airline like Air Arabia to look to their competition and find ways to offer lower prices than any other airline and still maintain customer satisfaction (Sector; Air).
Strategies at Air Arabia to Reduce Ticket Prices
Some of the methods recommended for low-cost airlines utilized by Air Arabia are:
1. "No frills" services such as not serving food on board or by charging customers for food and drink. Air Arabia maintains competitive pricing by offering a single class with a simple fare structure, and by charging money for on-board food, drinks, and headsets through agreements with various companies to sell consumer items on board, thereby providing a good complimentary income to the low cost model. By focusing on short direct flights, it might not even be necessary to offer food at all (Air 19).
2. Usage of secondary alternate city airports, point-to-point services, and expanded routes directed at migrants who need low-cost prices in order to travel where work is most plentiful (Air 27)
3. Creating package deals through cooperation with hotels and car rental companies. Dubai and Abu Dhabi are developing as strong tourist destinations, particularly Dubai., and even though Air Arabia is based in Abu Dhabi, they can benefit from the tourist industry. Air Arabia is going one step further by planning construction of a 300-room, 3-star hotel in the vicinity of Sharjah Airport (Air 32).
4. Although the Internet plays a major role in Air Arabia's business plan, they are still dependent on the travel agencies, and they must utilize electronic ticketing and non-cash payment methods to lessen their dependence and maintain low prices. Without the travel company as a middle man, ticket prices can be lowered. Air Arabia is improving online services (Air 22).
Works Cited
Air Arabia PJSC: Last Call for Take Off. Prime Group. 2008. 15 June 2008. http://www.airarabia.com/documents/AirArabiaFY07.pdf
Sector Coverage Team. Air Arabia Equity Research. ShuaaCapital. 12 March 2007. 14 June 2007. http://www.ameinfo.com/shuaa_pdf/EquityResearch/2007-03-13.pdf
Zawya. Air Arabia: Priced So That You Can Fly. EFG-Hermes. 28 June 2007. 14 June 2008. http://cm2.zawya.com/researchreports/efg/20070701_efg_110604.pdf Read More
Share:
Tags
Cite this document
(“Possible Problems in Air Arabia's Future Essay Example | Topics and Well Written Essays - 500 words”, n.d.)
Retrieved from https://studentshare.org/miscellaneous/1505633-possible-problems-in-air-arabias-future

CHECK THESE SAMPLES OF Possible Problems in Air Arabia's Future

As we shape up the interface between the designer and the virtual environment we are naturally going to produce a greater and far better outcome.
It will enable the end-user to be more creative and experimental and explore possibilities that were previously tedious or impossible. The design possibilities of virtuality will enhance the outlook of environments.
Now we can also term it according to the duration it can last. For any new thing, the duration is 10-30 years. If it lasts for 10 it would be popular as a tool another 10 and it would very well be a theory and if it survives all 30 years it will soon be defined as a revolution.
It was the end of the 20th century and the beginning of the 21st century that saw th...

There is a need, however, to prove or disprove Freud’s contention against religion because to perpetuate that ‘illusion’ blindly without ascertaining its truth or falsity is living in hope under a lie. Fortunately, psychologists and historians, contemporary to and subsequent to Freud, had offered proofs and arguments against Freud’s sweeping generalization of religion pointing to its unsoundness and perhaps, falsity.

In his book The Future of an Illusion, Sigmund Freud referred to religion as an illusion. Illusion, according to him, is fundamentally underpinned by human wishes as opposed to an error being essentially a consequence of mistake (213). Religion is an illusion because it is founded up...
7 Pages(1750 words)Book Report/Review

They are on trial and will be dealt with fairly. These laws ensure that no one, even if he or she has committed a crime is abused or punished cruelly.
Following the history of civilization like in china, we see the traces of systems for Criminal justice in order to provide safety for the citizens. Evolving through the years laws have been modified and changed to form the system that we know today.
From its start, the “U.S. criminal justice system” has advocated the idea of “checks and balances”. To avoid dictatorial rule, the people who founded this system in such a way that one person was not given control or authority completely to punish the criminals. The idea of assigning a ‘jury...
6 Pages(1500 words)Assignment
sponsored ads
Save Your Time for More Important Things
Let us write or edit the essay on your topic "Possible Problems in Air Arabia's Future" with a personal 20% discount.
GRAB THE BEST PAPER

Let us find you another Essay on topic Possible Problems in Air Arabia's Future for FREE!