Comments (0)
Add to wishlistDelete from wishlist
Cite this document
Summary
Man and woman are like two wheels of a carriage. The life of one without the other is incomplete. Neither man nor woman can be true to what they are, if either of them leads an isolated life. Man and woman both contribute to the development of each other's personality…
Download full paperFile format: .doc, available for editing
HIDE THIS PAPERGRAB THE BEST PAPER92.6% of users find it useful 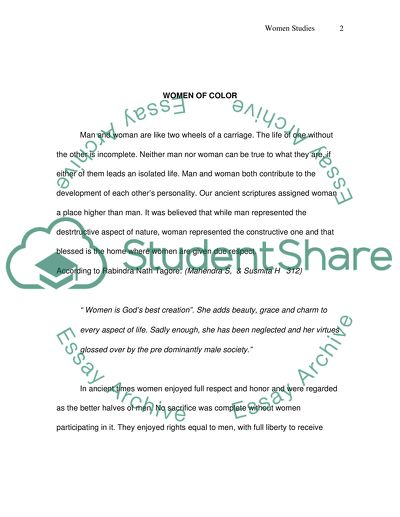 Extract of sample "Women Of Color"

Download file to see previous pages No sacrifice was complete without women participating in it. They enjoyed rights equal to men, with full liberty to receive education and prepare themselves in their own manner, to face the arduous battle of life. They had full voice in the settlement of matrimonial relations.
Many nations affirm the principle of gender equality. As women continue to advance in most walks of life, the impression that equality has been reached and that gender issues no longer pose real problems has naturally gained ground. Yet, many cultural, economic and social barriers remain. Although as many women as men possess the skills necessary to shape social and economic development, women are still prevented from fully participating in decision-making processes. Today the role of men and women in our society is both collaborative and supplementary. During the last five decades women have entered in increasing numbers into salaried and remunerative occupations as well as professions, which were previously the exclusive preserve of men. Today the difference that while women in former days worked along with men in the fields, now they work in factories or offices. The myth of male superiority is only a distortion that came in the wake of growing male domination. It is a paradox that there should be an increase in crimes against women, especially in the face of spectacular strides being made by them in various walks of life. Emancipation of women has occupied an important place in the scheme for social reforms undertaken in developing countries of Asia and Africa, in the later half on the 19th century.
Violence against women remains pervasive worldwide a major health and human rights concern. Women can experience physical or mental abuse throughout their lifecycle, in infancy, childhood and/or adolescence, or during adulthood or older age. It is the most atrocious manifestation of the systemic discrimination and inequality women continue to face, in law and in their everyday lives, around the world. It occurs in every region, country, and culture, regardless of income, class, race or ethnicity.
Violence against women in developing countries have becoming mere frequent and is alarmingly on the increase. Today in almost every stratum of our social life, women are treated as inferior creatures. Almost all countries go about shouting about constitutional equality between man and women, but have yet to go long way before women find an equally safe and honorable place in society. The newspaper daily read and hears about ladies living in busy localities being murdered in broad daylight. It is so because they have some yellow metal on them. Rape is not the only motive force behind the crimes against women. A woman, by her very constitution, is vulnerable. In poor countries Young girls are deceived on promises of a decent job or marriage. Once a girl has fallen, she is blackmailed into a life of vice. To get a feel of the widespread evil of crime against women, only requirement is to know the experiences of working girls from the moment they leave their home up to the time of their return. At all times they are ...Download file to see next pagesRead More
Share:
Tags
Cite this document
(“Women Of Color Essay Example | Topics and Well Written Essays - 2500 words”, n.d.)
Women Of Color Essay Example | Topics and Well Written Essays - 2500 words. Retrieved from https://studentshare.org/miscellaneous/1505327-women-of-color

CHECK THESE SAMPLES OF Women Of Color

In the story, one symbolism used to represent the sensitivity and weakness of women is the chrysanthemums themselves. The chrysanthemums are described as having stems that are too small and easy for Elisa’s energy, and this is basically the same as her character. As a weak and sensitive woman, she easily becomes prey to the kindness displayed by the stranger. Just like the chrysanthemums that need to be constantly transplanted and regularly cut, women like Elisa easily believe what men tell them although this is not necessarily true. Moreover, the chrysanthemums are somehow ridiculed by Harvey when he tells Elisa, “Some of those yellow chrysanthemums you had this year were ten inches across…I wish you’d wo...
7 Pages(1750 words)Literature review
sponsored ads
Save Your Time for More Important Things
Let us write or edit the essay on your topic "Women Of Color" with a personal 20% discount.
GRAB THE BEST PAPER

Let us find you another Essay on topic Women Of Color for FREE!