Comments (0)
Add to wishlistDelete from wishlist
Cite this document
Summary
China entered the feudal age long before Europe did. Only the earliest dynasties, most of them shrouded in the mist of legend and mythology, were based upon slave labor. The Xia and Shang dynasties, information about which is difficult to come by, were very probably dependent upon slavery for the sustenance of their economic model…
Download full paperFile format: .doc, available for editing
HIDE THIS PAPERGRAB THE BEST PAPER91.9% of users find it useful 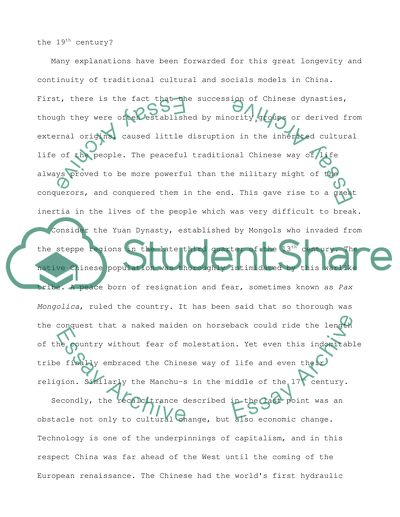 Download file to see previous pages It was therefore only to be expected that it would also make the usual transition from a feudal to a capitalist society much before Europe.
However, that was not to be. China's feudal system lasted for about three thousand years - almost three times that of Europe - and when the last dynasty, the Qing, collapsed in the early 20th century, it was largely because the weakened political system, still feudal in nature, could not recover from the successive blows dealt to it by the extraneous capitalist powers that were intent on exploiting the country politically and economically.
What is the reason behind such an extraordinary fall from a glorious past From its position as perhaps the earliest mature and technologically advanced civilization in the world, how did China become the 'sick man of Asia', as it was being called by the end of the 19th century
Many explanations have been forwarded for this great longevity and continuity of traditional cultural and socials models in China. First, there is the fact that the succession of Chinese dynasties, though they were often established by minority groups or derived from external origins, caused little disruption in the inherited cultural life of the people. The peaceful traditional Chinese way of life always proved to be more powerful than the military might of the conquerors, and conquered them in the end. This gave rise to a great inertia in the lives of the people which was very difficult to break.
Consider the Yuan Dynasty, established by Mongols who invaded from the steppe regions in the late third quarter of the 13th century. The native Chinese population was thoroughly intimidated by this warlike tribe. A peace born of resignation and fear, sometimes known as Pax Mongolica, ruled the country. It has been said that so thorough was the conquest that a naked maiden on horseback could ride the length of the country without fear of molestation. Yet even this indomitable tribe finally embraced the Chinese way of life and even their religion. Similarly the Manchu-s in the middle of the 17th century.
Secondly, the recalcitrance described in the last point was an obstacle not only to cultural change, but also economic change. Technology is one of the underpinnings of capitalism, and in this respect China was far ahead of the West until the coming of the European renaissance. The Chinese had the world's first hydraulic clock in the 8th century, and by the 11th century their advanced metallurgical industry was producing vast quantities of military grade iron. Yet the successive governments never wavered from the theory that agriculture was the key to the economy. All their economic and fiscal policies favored agriculture to the detriment of industry. Consequently, a proper industrial infrastructure never emerged.
Even a market-oriented agriculture can be the basis of a capitalist transformation. But Chinese agriculture was inward-looking. Farmers were not particularly interested in selling products, but lived off the harvest. So a vast portion of the country's production was never involved in the market.
The religion of Confucianism, first embraced by the Han emperors of the third century BCE and continuing as the 'state religion' until the fall of imperialism, preached a political and social ideology that instilled a complex retrospective attitude in the populace. Many scholars think that it was one the ...Download file to see next pagesRead More
Share:
Tags
Cite this document
(“Chinese Culture Essay Example | Topics and Well Written Essays - 1000 words”, n.d.)
Retrieved from https://studentshare.org/miscellaneous/1505017-chinese-culture

CHECK THESE SAMPLES OF Chinese Culture

...which drives the economic and industrial growth for the Chinese economy. According to the Countries and culture encyclopedia, Huang He Chinese culture dominates the region. The alluvial soil, moderate temperature and sufficient river water make the region a basic source of agriculture which has been the driver of Chinese economic growth since earlier times. The sub regions in China Proper add to its significance because of their agricultural, geographical and economic performance. The flat North China with soil replenished by silt carried down by the river is suitable for cultivation of staple crops like wheat, corn and sorghum. South China, on the other...
2 Pages(500 words)Essay

However, the evaluation of the cultural variations between America and Japan exposes fundamental variations, in terms of capitalism (man for himself culture) and the collectivism aspect in Japan. Bond, M. (1989). The industrial trends and Toyota business rivals have indicated that Toyota’s exponential growth has not been hampered by its major competitors like; GM, Ford, and Chrysler. Toyota employs a geographic-area universal infrastructure that is decentralized. Their business metamorphosis has therefore shifted drifted from profits to market share where they have labored so much effort on product quality, client satisfaction and efficacy of the product. These attributes have been viewed as some of the company’s stren...
8 Pages(2000 words)Assignment

Let us find you another Essay on topic Chinese Culture for FREE!