Comments (0)
Add to wishlistDelete from wishlist
Cite this document
Summary
This essay analyzes the Beveridge Report in 1942, that is often discussed as the main influence on the birth of the Classic Welfare State in Britain. The report sparked much debate and social policy was transformed. This essay will keep in mind characteristics when examining social policy in the forties…
Download full paperFile format: .doc, available for editing
HIDE THIS PAPERGRAB THE BEST PAPER96.7% of users find it useful 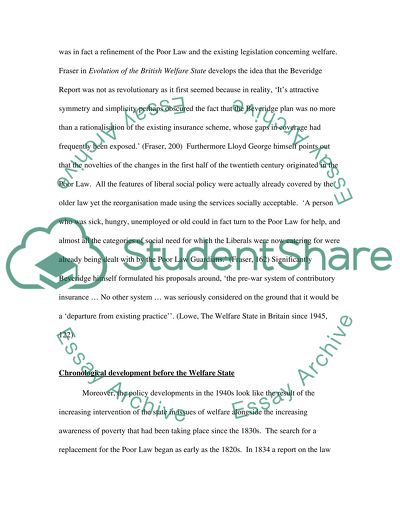 Download file to see previous pages This essay discusses that for those in power, it had the benefits of gaining socialist support. Not only liberal politicians but both Lloyd George and Churchill encouraged social policy as a means of avoiding socialism and when labor came into power they were criticised for, ‘failing to introduce a distinctively socialist policy in the field of education.’
The government response to poverty in the 1940s is the culmination of different attempts to overcome and replace the Poor Law since the 1820s. The legislation before the 1940s is similar in character to the legislation in the 1940s. It is so similar that most historians and even those bringing about the new laws have commented on the welfare state being just a socially acceptable version of the Poor Law. In addition, the Acts passed can be shown to be a result of the political maneuverings and practical responses to the events of that decade. However, there are some revolutionary aspects that lie behind the government’s response. These are the fundamental changes in the perception and understanding of the nature of mankind, the state and the relationship between them. The state took on a responsibility for welfare that involved a greater involvement in its citizen’s lives. Furthermore, the general definition of poverty expanded to include everyone in need, not just those who could not subsist. Beveridge’s report is revolutionary as being the first completely planned social document which envisages Disease, Idleness, Want, Squalor and Ignorance as being the state’s responsibility.
...
All the features of liberal social policy were actually already covered by the older law yet the reorganisation made using the services socially acceptable. 'A person who was sick, hungry, unemployed or old could in fact turn to the Poor Law for help, and almost all the categories of social need for which the Liberals were now catering for were already being dealt with by the Poor Law Guardians.' (Fraser, 162) Significantly Beveridge himself formulated his proposals around, 'the pre-war system of contributory insurance No other system was seriously considered on the ground that it would be a 'departure from existing practice''. (Lowe, The Welfare State in Britain since 1945, 122)

Chronological development before the Welfare State
Moreover, the policy developments in the 1940s look like the result of the increasing intervention of the state in issues of welfare alongside the increasing awareness of poverty that had been taking place since the 1830s. The search for a replacement for the Poor Law began as early as the 1820s. In 1834 a report on the law was published investigating and suggesting solutions for the escalating problems of the Poor Law. Moreover in the 1840s a society of doctors envisaged a system of free health care. Movement later in that century began to provide assistance, outwith the Poor Law, for the sick and temporarily unemployed. This was through the Medical Relief Act (1885) and Chamberlain's Circular (1886). Here were the beginnings of assistance from a source outside of the Poor Law. This is the drift which could still be recognised in 1940s policy. More legislation was passed at the beginning of the twentieth century including more and more people in ...Download file to see next pagesRead More
Share:
Tags
Cite this document
(“British Welfare State Essay Example | Topics and Well Written Essays - 2000 words”, n.d.)
Retrieved from https://studentshare.org/miscellaneous/1505015-british-welfare-state

In order to compare the welfare system of the three proposed countries, it is important to first develop a comparative method that would guide in comparing the three states. For the purpose of this paper, a binary comparison would be conducted. The implicit comparison would deal with Britain while the explicit comparison would explore the USA and Canada. Thereby a small N’ study would be used, that is, of three countries.
The three countries selected to share a similarity in the form that these countries are a welfare state. This is when welfare is mainly funded by the state. While the USA and Canada focus on the liberal welfare state, the welfare state of the UK is not quite defined.
The comparison of the welfare...
8 Pages(2000 words)Term Paper
sponsored ads
Save Your Time for More Important Things
Let us write or edit the essay on your topic "British Welfare State" with a personal 20% discount.
GRAB THE BEST PAPER

Let us find you another Essay on topic British Welfare State for FREE!