Comments (0)
Add to wishlistDelete from wishlist
Cite this document
Summary
The Ku Klux Klan used covert methods when attempting to influence the votes of black and white republicans during reconstruction in an attempt to influence the voting outcomes. Rather than forcing the vote it forced the federal government to protect those pursued by the KKK…
Download full paperFile format: .doc, available for editing
HIDE THIS PAPERGRAB THE BEST PAPER91.7% of users find it useful 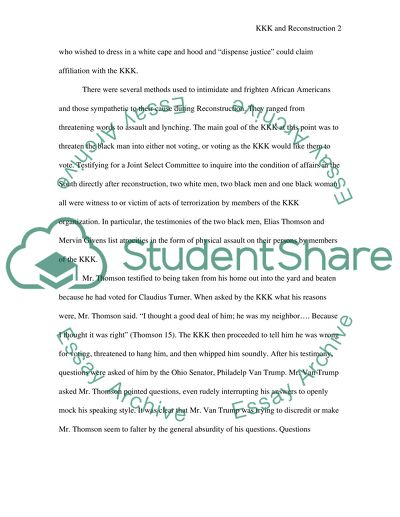 Download file to see previous pages The political and social realities of the South immediately after the Civil War made it an ideal environment for the transformation of the KKK. It was quickly reborn at a convention of delegates in Nashville, TN. A constitution was drawn up and Nathan Bedford Forest, a former slave trader and Confederate general was elected Imperial Wizard. Due to the secretive and covert nature of the organization, there was a lack of centralized control and any person who wished to dress in a white cape and hood and "dispense justice" could claim affiliation with the KKK.
There were several methods used to intimidate and frighten African Americans and those sympathetic to their cause during Reconstruction. They ranged from threatening words to assault and lynching. The main goal of the KKK at this point was to threaten the black man into either not voting, or voting as the KKK would like them to vote. Testifying for a Joint Select Committee to inquire into the condition of affairs in the South directly after reconstruction, two white men, two black men and one black woman all were witness to or victim of acts of terrorization by members of the KKK organization. In particular, the testimonies of the two black men, Elias Thomson and Mervin Givens list atrocities in the form of physical assault on their persons by members of the KKK.
Mr. Thomson testified to being taken from his home out into the yard and beaten because he had voted for Claudius Turner. When asked by the KKK what his reasons were, Mr. Thomson said. "I thought a good deal of him; he was my neighbor. Because I thought it was right" (Thomson 15). The KKK then proceeded to tell him he was wrong for voting, threatened to hang him, and then whipped him soundly. After his testimony, questions were asked of him by the Ohio Senator, Philadelp Van Trump. Mr. Van Trump asked Mr. Thomson pointed questions, even rudely interrupting his answers to openly mock his speaking style. It was clear that Mr. Van Trump was trying to discredit or make Mr. Thomson seem to falter by the general absurdity of his questions. Questions including if the KKK was trying to intimidate colored people, why did they make you promise not to tell anyone of their visit (Thomson 16-17)
After testifying that he was whipped until his short was torn from his body, Mr. Mervin Givens faced Senator Van Trump's particular brand of questioning. Mr. Givens said that the reason he was beaten was his voting preference. Mr. Van Trump asked why Mr. Givens was testifying now, and if he thought that those three men (the committee) could change anything. Mr. Givens calmly replied that they could get help. Mr. Givens' testimony shows that although the black community was living in fear of the KKK, they were still able to stand up for their rights when they felt a change was possible. The KKK might be making them extra wary, but they were not losing hope.
The two white men -Samuel Poinier and D.H. Chamberlain- were not physically assaulted in any way. Samuel Poinier was a prominent Republican newspaperman and testified to receiving threatening communications ordering him to leave the county and signed by the KKK (Thomson 16). He also mentioned having witnessed, or heard of attacks on black men and women in his county, ...Download file to see next pagesRead More
Share:
Tags
Cite this document
(“The Tactics of the Ku Klux Klan Used During Post-Civil War Essay”, n.d.)
The Tactics of the Ku Klux Klan Used During Post-Civil War Essay. Retrieved from https://studentshare.org/miscellaneous/1504738-the-tactics-of-the-ku-klux-klan-used-during-post-civil-war-reconstruction

“The Tactics of the Ku Klux Klan Used During Post-Civil War Essay”, n.d. https://studentshare.org/miscellaneous/1504738-the-tactics-of-the-ku-klux-klan-used-during-post-civil-war-reconstruction.
Comments (0)
Click to create a comment or rate a document

Said (2001), on the other hand, repudiates Huntington’s views on the clash of civilizations; he purports that Huntington failed to see the ‘internal dynamics and plurality of every civilization’ and that Huntington’s views on civilization and the west-Islam conflict stem from ‘downright ignorance’. Said is...
10 Pages(2500 words)Assignment
sponsored ads
Save Your Time for More Important Things
Let us write or edit the essay on your topic "The Tactics of the Ku Klux Klan Used During Post-Civil War Reconstruction" with a personal 20% discount.
GRAB THE BEST PAPER

Let us find you another Essay on topic The Tactics of the Ku Klux Klan Used During Post-Civil War Reconstruction for FREE!