Ethnic Difference in Quality of Life in Adolescent - Essay Example

Comments (0)
Add to wishlistDelete from wishlist
Cite this document
Summary
The purpose of this article is to analyze ethnic and cultural differences in health related quality of life in adolescents among Chinese, Malay and Indians in Singapore. To examine the ethnic differences; Quality of Life Questionnaire for Adolescents (QOLQA) was prepared…
Download full paperFile format: .doc, available for editing
HIDE THIS PAPERGRAB THE BEST PAPER98.3% of users find it useful 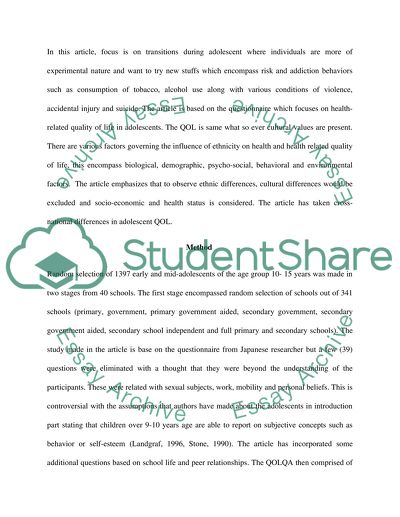 Extract of sample "Ethnic Difference in Quality of Life in Adolescent"

Download file to see previous pages It is the assessment of physical, mental and social well-being and for informed healthcare decision making (Wee, 2007). Singapore is a multi-ethnic city-state, with a resident population of 3.26 million persons in 2000 of which 76.8% are Chinese, 13.9% Malays and 7.9% Indians (Leow, 2001). Singapore is wholly urban, and has undergone rapid economic and demographic transitions over the last 40 years, from a poor country with a high fertility rate, to a rich one with one of the lowest fertility rates in Asia and a rapidly aging population. This paper describes self-rated health in Singapore, and examines the socio-economic factors and health behaviors associated with poor health ratings. It concludes by discussing the public health implications of the findings.
In this article, focus is on transitions during adolescent where individuals are more of experimental nature and want to try new stuffs which encompass risk and addiction behaviors such as consumption of tobacco, alcohol use along with various conditions of violence, accidental injury and suicide. The article is based on the questionnaire which focuses on health-related quality of life in adolescents. The QOL is same what so ever cultural values are present. There are various factors governing the influence of ethnicity on health and health related quality of life, this encompass biological, demographic, psycho-social, behavioral and environmental factors. The article emphasizes that to observe ethnic differences, cultural differences would be excluded and socio-economic and health status is considered. The article has taken cross- national differences in adolescent QOL.
Method
Random selection of 1397 early and mid-adolescents of the age group 10- 15 years was made in two stages from 40 schools. The first stage encompassed random selection of schools out of 341 schools (primary, government, primary government aided, secondary government, secondary government aided, secondary school independent and full primary and secondary schools). The study made in the article is base on the questionnaire from Japanese researcher but a few (39) questions were eliminated with a thought that they were beyond the understanding of the participants. These were related with sexual subjects, work, mobility and personal beliefs. This is controversial with the assumptions that authors have made about the adolescents in introduction part stating that children over 9-10 years age are able to report on subjective concepts such as behavior or self-esteem (Landgraf, 1996, Stone, 1990). The article has incorporated some additional questions based on school life and peer relationships. The QOLQA then comprised of 70 items and pre-tested on 77 subjects. The questionnaire was translated in the Chinese which was not required as the ethnic differences were observed in Singapore where the primary language of instruction is English. This was not required, moreover 70 items in the questionnaire was divided into five domains, physical (8 items) encompassing pain, discomfort, energy and fatigue, sleep and rest; psychological (33 items) encompassing positive feelings, self esteem, body image and appearance, negative feelings; independence (6 items): activities of daily living, ...Download file to see next pagesRead More
Share:
Tags
Cite this document
(“Ethnic Difference in Quality of Life in Adolescent Essay”, n.d.)
Ethnic Difference in Quality of Life in Adolescent Essay. Retrieved from https://studentshare.org/miscellaneous/1504650-ethnic-difference-in-quality-of-life-in-adolescent

“Ethnic Difference in Quality of Life in Adolescent Essay”, n.d. https://studentshare.org/miscellaneous/1504650-ethnic-difference-in-quality-of-life-in-adolescent.
Comments (0)
Click to create a comment or rate a document

Community life has its advantages but also has its limitations to the members and the outsiders.
“The good things we secure for ourselves are uncertain and precious until it is secured for everyone and incorporated into our common life.”-Jane Addams. With society moving faster and more detached to technology, busy schedules, and job changes, it becomes harder and harder to feel a sense of community. This can result in a life of solitude and a lose a sense of belonging. Community life helps extract people out of this solitude life and introduce better, challenging and fun tasks such as participation in acts of kindness. It also provides room for volunteering, meeting neighbors, discussing important issues with othe...
7 Pages(1750 words)Case Study
sponsored ads
Save Your Time for More Important Things
Let us write or edit the essay on your topic "Ethnic Difference in Quality of Life in Adolescent" with a personal 20% discount.
GRAB THE BEST PAPER

Let us find you another Essay on topic Ethnic Difference in Quality of Life in Adolescent for FREE!