Comments (0)
Add to wishlistDelete from wishlist
Cite this document
Summary
Mount Pinatubo is located in Philippines; the volcano remained dormant for 500hundred years until it exploded in 1991. The eruption and consequential climatic drift in form of heavy rain falls and giant mudflows of volcanic ash was challenge for the local community…
Download full paperFile format: .doc, available for editing
HIDE THIS PAPERGRAB THE BEST PAPER95.1% of users find it useful 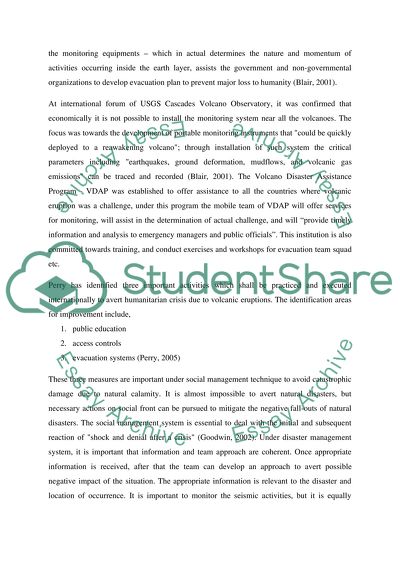 Download file to see previous pages The evacuation of such huge population would have been a task nearest to impossible, but it was the availability of aircrafts in the U.S military base which escorted the locals safely. The Clark Air Force Base offered its services to the response team of Volcano Disaster Assistance Program; the team was fully engaged towards the monitoring of the volcano. The team was able to install certain instrumentation for the purpose of seismic monitoring; the intent of this exercise was to determine the occurrence of earthquakes and conduct the mapping of the volcanic deposits. The monitoring equipments assisted the team to realise that "large eruption was imminent". Soon after this confirmation, the evacuation scheme was pursued. It was the monitoring equipments which assisted the geologists in determination of the actual threat. From the incident of Mount Pinatubo eruption, it has been confirmed that the importance of monitoring equipments is immense, and the timely application of these monitoring equipments can assist in the estimation of challenge, and its extent (Goodwin, 2002).
The technological advancement is the key to safe and secure future (Murphy, 1989). The presence of the American military base offered U.S. Geological Department to conduct its activities without further diplomatic intervention, and the timely intervention with application of the latest gadgets secured the future of hundreds of thousands. The American military was able to mobilize its hardware to secure locations, and damage worth millions of dollars was prevented.
From geological aspect, any geological catastrophic is never spontaneous. The geological upset occurs when certain activities between the layers of the Earth take momentum; these activities are steady, and accelerate when porosity on the earth layer exists. The installation of the monitoring equipments - which in actual determines the nature and momentum of activities occurring inside the earth layer, assists the government and non-governmental organizations to develop evacuation plan to prevent major loss to humanity (Blair, 2001).
At international forum of USGS Cascades Volcano Observatory, it was confirmed that economically it is not possible to install the monitoring system near all the volcanoes. The focus was towards the development of portable monitoring instruments that "could be quickly deployed to a reawakening volcano"; through installation of such system the critical parameters including "earthquakes, ground deformation, mudflows, and volcanic gas emissions" can be traced and recorded (Blair, 2001). The Volcano Disaster Assistance Program - VDAP was established to offer assistance to all the countries where volcanic eruption was a challenge, under this program the mobile team of VDAP will offer services for monitoring, will assist in the determination of actual challenge, and will "provide timely information and analysis to emergency managers and public officials". This institution is also committed towards training, and conduct exercises and workshops for evacuation team squad etc.
Perry has identified three important activities which shall be practiced and executed internationally to avert humanitarian crisis due to volcanic eruptions. The identification areas for improvement include,
1. public education
2. access controls
3. evacuation systems (Perry, 2005)
These three measures are important under social management technique to avoid ...Download file to see next pagesRead More
Share:
Tags
Cite this document
(“MHE503 Survey of Emergency and Disaster Mgt Module 4 Case Essay”, n.d.)
MHE503 Survey of Emergency and Disaster Mgt Module 4 Case Essay. Retrieved from https://studentshare.org/miscellaneous/1504202-mhe503-survey-of-emergency-and-disaster-mgt-module-4-case

Consequences of the Chernobyl disaster also affected the natural organic process of flora and fauna in this region, in addition to its far fetched effects over human lives. An explosion of the (UTC+3) reactor no.4 occurred on 26th April 1986 at 01:23:45 a.m. The nuclear fallout of this explosion is considered to be four hundred times greater than that of the Hiroshima atomic bombing. The smoke of this explosion spread over a huge part of Soviet Union, Eastern Europe, Western Europe, Northern Europe and the eastern part of North America. Some of the most important parts of the Soviet Union, including Russia, Ukraine, and Belarus were badly infected by the effects of this massive nuclear fallout and almost 340,000 people were evacua...
10 Pages(2500 words)Case Study

In th...
8 Pages(2000 words)Case Study
sponsored ads
Save Your Time for More Important Things
Let us write or edit the essay on your topic "MHE503 Survey of Emergency and Disaster Mgt Module 4 Case" with a personal 20% discount.
GRAB THE BEST PAPER

Let us find you another Essay on topic MHE503 Survey of Emergency and Disaster Mgt Module 4 Case for FREE!