Comments (0)
Add to wishlistDelete from wishlist
Cite this document
Summary
The field of Biology, especially the field of Medicine is growing at very fast pace. New researches and advancements in processes and procedures come up each and every day increasing the scope of this field even further. As the time passes, more and more new kinds of diseases and biological and medical problems are being discovered and more and more research is being done to tackle with them…
Download full paperFile format: .doc, available for editing
HIDE THIS PAPERGRAB THE BEST PAPER94.8% of users find it useful 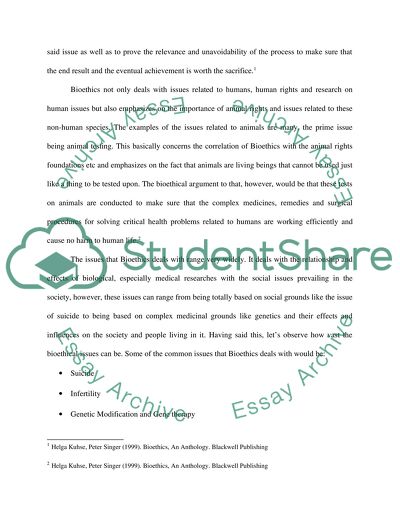 Download file to see previous pages Bioethics is a study that deals with all the ethical questions raised due to biological and medical researches and advancements and attempts to answer those questions and satisfy the masses. It also deals with the effect of these biological and medical advancements on the correlation of these fields with other social aspects of life like religion, politics and other social sciences. It talks about the responsibility of the government, the religious leaders, the sociologists and other social figures in regulating and taking notice of any controversial and/or disputed biological or medical issue prevailing in the society. It strives to provide proper arguments and debates to satisfy the concerned and to provide evidence for the importance of the said issue as well as to prove the relevance and unavoidability of the process to make sure that the end result and the eventual achievement is worth the sacrifice.1
Bioethics not only deals with issues related to humans, human rights and research on human issues but also emphasizes on the importance of animal rights and issues related to these non-human species. The examples of the issues related to animals are many, the prime issue being animal testing. This basically concerns the correlation of Bioethics with the animal rights foundations etc and emphasizes on the fact that animals are living beings that cannot be used just like a thing to be tested upon. The bioethical argument to that, however, would be that these tests on animals are conducted to make sure that the complex medicines, remedies and surgical procedures for solving critical health problems related to humans are working efficiently and cause no harm to human life.2
The issues that Bioethics deals with range very widely. It deals with the relationship and effects of biological, especially medical researches with the social issues prevailing in the society, however, these issues can range from being totally based on social grounds like the issue of suicide to being based on complex medicinal grounds like genetics and their effects and influences on the society and people living in it. Having said this, let's observe how vast the bioethical issues can be. Some of the common issues that Bioethics deals with would be:
Suicide
Infertility
Genetic Modification and Gene therapy
Cloning (Human and Animal)
Abortion
Euthanasia (Human as well as Animal)
Animal Rights
Human Testing
Animal Testing
Stem cell Research
Parthenogenesis
Genetic Engineering, etc
Recently, the research on stem cells is being questioned on the bioethical grounds quite a lot. First, let's look at what stem cells are and what their function actually is. Stem cells are those cells that have the ability to renew or rejuvenate themselves through mitotic divisions and can transform into differentiated specialized cells of a large variety, however, the extent to which a stem cell can differentiate into a more specialized form varies greatly from one stem cell to another. These stem cells are found in almost all multicellular organisms (organisms having many cells and differentiated cell types for different bodily functions), however, when talking about ...Download file to see next pagesRead More
Share:
Tags
Cite this document
(“Bioethical Research on Stem Cells Essay Example | Topics and Well Written Essays - 1000 words”, n.d.)
Bioethical Research on Stem Cells Essay Example | Topics and Well Written Essays - 1000 words. Retrieved from https://studentshare.org/miscellaneous/1503992-bioethical-research-on-stem-cells

CHECK THESE SAMPLES OF Bioethical Research on Stem Cells

13 Pages(3250 words)Assignment
sponsored ads
Save Your Time for More Important Things
Let us write or edit the essay on your topic "Bioethical Research on Stem Cells" with a personal 20% discount.
GRAB THE BEST PAPER

Let us find you another Essay on topic Bioethical Research on Stem Cells for FREE!