Comments (0)
Add to wishlistDelete from wishlist
Cite this document
Summary
In the consumer culture of marriage, commitments last as long as the other person is meeting our needs. We still believe in commitment, because we know that committed relationships are good for us, but powerful voices
Few would disagree with the views quoted above in the sense that we are facing a "consumer culture of marriage"…
Download full paperFile format: .doc, available for editing
HIDE THIS PAPERGRAB THE BEST PAPER93% of users find it useful 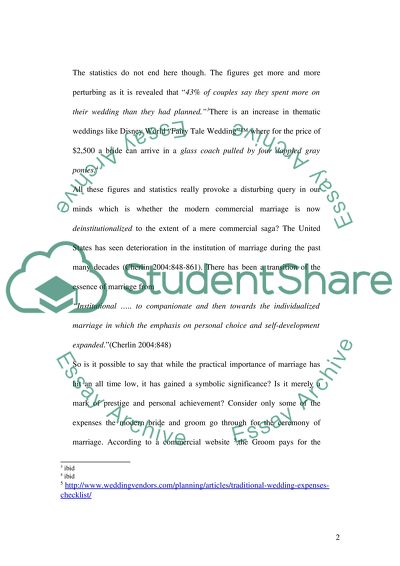 Extract of sample "Modern Marriage, only a status symbol"

Download file to see previous pages The Modern American wedding has become much more of commercial saga generating a massive turnover every year. Wedding planners, florists, caterers, hairstylists, clothes, designers, have all got their fortunes connected to the wedding industry. According to statistics 2
"the average American wedding costs $22,360 and has 168 guests, who give 100 gifts that cost an average of $85 each, meaning the net loss to the couple is $13,860..the average guest spends $500 to attend a wedding-not including plane tickets."
The statistics do not end here though. The figures get more and more perturbing as it is revealed that "43% of couples say they spent more on their wedding than they had planned."3There is an increase in thematic weddings like Disney World "Fairy Tale Wedding" where for the price of $2,500 a bride can arrive in a glass coach pulled by four dappled gray ponies.4
All these figures and statistics really provoke a disturbing query in our minds which is whether the modern commercial marriage is now deinstitutionalized to the extent of a mere commercial saga The United States has seen deterioration in the institution of marriage during the past many decades (Cherlin 2004:848-861). There has been a transition of the essence of marriage from
So is it possible to say that while the practical importance of marriage has hit an all time low, it has gained a symbolic significance Is it merely a mark of prestige and personal achievement Consider only some of the expenses the modern bride and groom go through for the ceremony of marriage. According to a commercial website 5,the Groom pays for the Bride's rings, Boutonnire for the groom and ushers ,groom's present to bridegroom's presents to ushers and best man, ties and gloves for the ushers ,clergy member's cost ,corsages for the immediate members of both families; also the bride's going away corsage ,bachelor dinner (optional, and usually given by best man or ushers) ,rehearsal dinner (optional, but is usual) ,accommodations for out-of-town ushers and the honeymoon. This list is not exhaustive though and the bride has to pay for a similar list of expenditure.
What happens then, after such a grand wedding Every year the government issues alarming figures of divorce rate statistics, many homes are broken and the children are displaced. Academic opinion and research has spoken of the weakening of the social norms that regulate people's behaviour in this regard. This is another symbol of the deteriorating society where there is a sort of a "taken-for-granted" norm that allows people to go on with their lives with nobody questioning their behaviour (Cherlin2004:848-849, Whitehead 2001:6-16).
The wedding as a status symbol
Recent weddings have become little less than individual achievements.
"In the distant past, a wedding was an event at which two kinship groups formed an alliance. More recently, it has been an event organized and paid for by parents, at which they display their approval and support for their child's marriage" (Cherlin 2004:848-849)
So despite its destabilisation as an "institution", the American Wedding has become "an ...Download file to see next pagesRead More
Share:
Tags
Cite this document
(“Modern Marriage, only a status symbol Essay Example | Topics and Well Written Essays - 1500 words”, n.d.)
Retrieved de https://studentshare.org/miscellaneous/1503740-modern-marriage-only-a-status-symbol

CHECK THESE SAMPLES OF Modern Marriage, only a status symbol

Role of Einstein in Popularization of Modern Physics

Ever since man has started to observe, think and reason he has been wondering about the world around him. He tried to find ways to organize the disorder prevailing in the observed facts about the natural phenomena and material things in an orderly manner. His attempts resulted in the birth of a single discipline of science, called natural philosophy. There was huge increase in the volume of scientific knowledge up till the beginning of nineteenth century and it was found necessary to classify the study of nature into two branches, the biological sciences which deal with living things and physical sciences which concern with non-living things. Physics is an important and basic part of physical sciences besides its other disciplines...
10 Pages(2500 words)Term Paper

Although Aristotle outlines three requisite character traits that the tragic hero should possess, he qualifies the definition of the tragic hero with a set of events that must also take place before the hero can be considered truly tragic. Once this process is understood, it is easy to see how the sudden downfall of a mighty man, such as Oedipus the King from the play by Sophocles for example, would be dramatic and shocking to a public dominated by strict social classes. Moving into the more modern period, though, a subtle shift in the approach to tragedy began to take shape. The popular playwright William Shakespeare explored these concepts within his work as is demonstrated in plays such as Hamlet. In this play, the main charact...
9 Pages(2250 words)Essay
sponsored ads
Save Your Time for More Important Things
Let us write or edit the essay on your topic "Modern Marriage, only a status symbol" with a personal 20% discount.
GRAB THE BEST PAPER

Let us find you another Essay on topic Modern Marriage, only a status symbol for FREE!