Comments (0)
Add to wishlistDelete from wishlist
Cite this document
Summary
In the recent years, the increasing progression of obesity among people in industrialized nations, has reached epidemic proportions. The prevalence of overweight and obese adults in the U.S. has reached about 60% of the population and approximately 30% of this populace has been classified as clinically obese (ref)…
Download full paperFile format: .doc, available for editing
HIDE THIS PAPERGRAB THE BEST PAPER96.8% of users find it useful 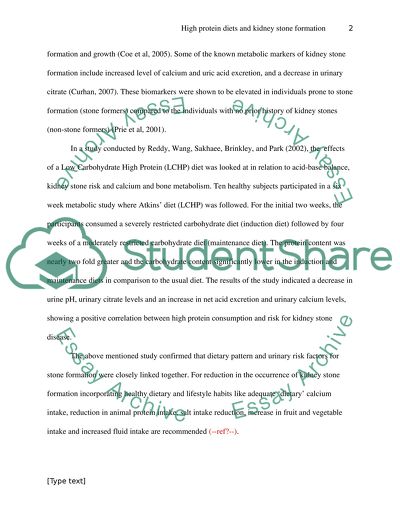 Do high protein diets increase the risk of kidney stone formation In the recent years, the increasing progression of obesity among people in industrialized nations, has reached epidemic proportions. The prevalence of overweight and obese adults in the U.S. has reached about 60% of the population and approximately 30% of this populace has been classified as clinically obese (ref). To combat the obesity problem, following various weight- reducing diets have become the latest fad, with high protein diets being the most popular among the list. Changes in the lifestyle and dietary habits like the reduction of overweight through extreme fasting or low-carbohydrate high-protein weight-loss diets, e.g. Atkins diets have led to the rise and prevalence of kidney stone formation (Siener, 2006).
Kidney stones are among the most painful and prevalent of urologic disorders. According to the National Institute of Diabetes and Digestive Kidney Disease, a kidney stone can be defined as a solid crystallized piece of material that forms in the kidney from substances in the urine. It may be as small as a grain of sand or as large as a pearl. The process of kidney stone formation is medically known as nephrolithiasis or urolithiasis. The most common stones contain calcium in combination with oxalate and/or phosphate. A less common type is caused by urinary tract infection known as struvite or infection stone. Apart from these, there are also other rare types made of pure uric acid stones, cystine stones etc (http://www.ucof.com/education
/kidney_stones.php).
A number of risk factors like dehydration, improper diet, systemic disorders etc are suggested to be important determinants of stone formation. Stone formation usually results from an imbalance between factors that promote urinary crystallization and those that inhibit crystal formation and growth (Coe et al, 2005). Some of the known metabolic markers of kidney stone formation include increased level of calcium and uric acid excretion, and a decrease in urinary citrate (Curhan, 2007). These biomarkers were shown to be elevated in individuals prone to stone formation (stone formers) compared to the individuals with no prior history of kidney stones (non-stone formers) (Prie et al, 2001).
In a study conducted by Reddy, Wang, Sakhaee, Brinkley, and Park (2002), the effects of a Low Carbohydrate High Protein (LCHP) diet was looked at in relation to acid-base balance, kidney stone risk and calcium and bone metabolism. Ten healthy subjects participated in a six week metabolic study where Atkins' diet (LCHP) was followed. For the initial two weeks, the participants consumed a severely restricted carbohydrate diet (induction diet) followed by four weeks of a moderately restricted carbohydrate diet (maintenance diet). The protein content was nearly two fold greater and the carbohydrate content significantly lower in the induction and maintenance diets in comparison to the usual diet. The results of the study indicated a decrease in urine pH, urinary citrate levels and an increase in net acid excretion and urinary calcium levels, showing a positive correlation between high protein consumption and risk for kidney stone disease.
The above mentioned study confirmed that dietary pattern and urinary risk factors for stone formation were closely linked together. For reduction in the occurrence of kidney stone formation incorporating healthy dietary and lifestyle habits like adequate 'dietary' calcium intake, reduction in animal protein intake, salt intake reduction, increase in fruit and vegetable intake and increased fluid intake are recommended (--ref--).
In conclusion, low-carbohydrate high-protein diets are popular and are consumed by many people in an attempt to reduce their weight but such a diet delivers an exaggerated acid load implicating an increase in kidney stone risk. Therefore, when a balanced diet is consumed with adequate fluid intake, the risk of developing a stone can be reduced greatly for both stone formers and non-stone formers.
REFERENCES
Coe,F.L., Evan, A., Worcester, E. (2005). Kidney stone disease. Journal of Clinical
Investigation, 2598-2608.
Curhan, G.C.(2007). Epidemiology of Stone Disease. The Urology Clinics of North America,
287-293.
National Institute of Diabetes and Digestive and Kidney Diseases, 2007, Retrieved December 10,
2007 from: http://www.nlm.nih.gov/medlineplus/kidneystones.html).
Prie, D, Raver, V, Boccon-Gibod , L, & Friedlander, G (2001). Frequency of renal phosphate
leak among patients with calcium nephrolithiasis. Kidney International, 272-276.
Reddy, S.T., Wang, C.Y., Sakhaee, K., Brinkley, L., Park, C.Y.C. (2002). Effect of Low- Carbohydrate High-Protein Diets on Acid-Base Balance, Stone-Forming Propensity, and Calcium Metabolism. American Journal of Kidney Disease, 265-274.
Siener, R. (2006). Impact of dietary habits on stone incidence. Urological Research, 131-133. Read More
Share:
Tags
Cite this document
(“Do high protein diets increase the risk of kidney stones Essay”, n.d.)
Do high protein diets increase the risk of kidney stones Essay. Retrieved from https://studentshare.org/miscellaneous/1503546-do-high-protein-diets-increase-the-risk-of-kidney-stones

“Do High Protein Diets Increase the Risk of Kidney Stones Essay”, n.d. https://studentshare.org/miscellaneous/1503546-do-high-protein-diets-increase-the-risk-of-kidney-stones.
Comments (0)
Click to create a comment or rate a document

...synthetase, which catalyzes “the formation of cystathionine from homocysteine and serine” (Menkes, 1971). “As a result of the block, increased amounts of homocystine, and its precursor methionine, are found in urine and plasma” (Menkes, 1971). Metabolic Effects of High-Protein diet a. Nephrolithiasis: a high-protein diet can induce nephrolithiasis by causing hypercalciuria. Hypercalciuria results from an “increase in the glomerular filtration rate and decrease in the renal tubular reabsorption of calcium” (Denke, 2001). A high protein diet can also lead...
8 Pages(2000 words)Essay

...) In order to reduce those risks, it is necessary to closely monitor renal activities following the drug administration. Similarly, methotrexate causes damage to renal tubules and collecting ducts and ultimately results in acute tubular necrosis. While giving high dose therapy, drug precipitates out of the solution and is accumulated in tubules ducts; this condition may worsen the injury. Acute kidney injury is more likely to occur at any time during this treatment. To minimize the renal risk chances associated with high dose therapy, patients are given sodium bicarbonate containing I.V. fluids (Sodium Bicarbonate, n.d). Through this hydration technique,...
4 Pages(1000 words)Research Paper

...? High Risk Families: Teen Pregnancy High Risk Families: Teen Pregnancy High-risk families cause many problems not only to the individual members of the family, but also to society in which the family exists. Economic problems, substance abuse, child developmental problems, defective physical or mental health, teen pregnancy, unwanted abortions etc are some of the major reasons, which put families into high risk. Teen pregnancy or unwanted pregnancy and the subsequent physical, mental and social problems cause many problems to families. This paper analyses how teen pregnancy causes huge...
5 Pages(1250 words)Essay

..., obesity, dehydration, diets high in protein or sodium, and other digestive diseases. Since there are different ways for an individual to form kidney stones, different types of kidney stones have been recognized. Calcium stones form as a result of too much calcium oxalate in the body. This substance is common in many food products and is created regularly by the liver, making calcium stones the most common type of kidney stone (McAninch, 2013). Struvite stones form as the result of an infection in the urinary tract, and tend to be among...
3 Pages(750 words)Essay

..."A Comparison of Kidney Dialysis and Kidney Transplantation" INTRODUCTION Kidney failure is one of the most common and most lethal type of organ failure. The kidneys, a pair of bean-shaped organs acts as filters for blood and other body fluids. Without the kidneys, the body will succumb to the toxins it encounters everyday. Toxins filtered by the kidneys are excreted out of the body through the urinary system mixed with urine. Toxins and other harmful substances, come from various sources such as the environment (in the air, water and other environmental factors), from our food especially those laced with high...
4 Pages(1000 words)Essay

...-resistant pathogens (Wakabayashi et al., 2003). Lf is found in high concentrations in breast milk (~3–7 mg/ml) and tear fluid (1–4 mg/ml) (Rogan et al., 2006). Among the many constituents of milk which have revealed antimicrobial activity, lactoferrin exhibits both bacteriostatic and bactericidal activity against a wide array of microorganisms, including those causing gastroenteric infections, food poisoning, listeriosis and mastitis (Dionysius et al., 1993). Recently, clinical trials have demonstrated that bovine lactoferrin (bLF) administration can reduce the risk of colon carcinogenesis in humans (Tsuda et al., 2010). A key role of Lf is to scavenge non-protein-bound iron in body...
25 Pages(6250 words)Research Paper

...Diet Discuss modifications of Diet as related to various of health. Examples include dieting to reduce overall calories, DASH diet, fat, fiber, antioxidants and other strategies for risk reduction. Again, be specific The DASH diet encourages people to eat a lot of fiber, fruits and vegetables as well as discourages eating of red meat. According to the DASH diet, eating less fatty foods and sweets reduces the high number of calories and more fiber in ones’ meal increases the level of glucose in the blood as well as maintains the blood insulin level to manageable level. People with...
1 Pages(250 words)Essay

...acids share absorption transport systems. Hence, it is advised that individual amino acid supplements should be avoided. Q 5. Why would it be useful to know information about nitrogen balance? Nitrogen balance is a standard which has been set to understand the excess or deficiency of proteins in the diet. The nitrogen balance keeps the amount of protein consumed and lost in balance. If the balance is disturbed, the person is said to have lost nitrogen equilibrium. Nitrogen balance is necessary to understand if the body is growing properly or not. Q 6. What are some health consequences of protein under-nutrition? Protein under-nutrition is also...
2 Pages(500 words)Essay

...Case Study Report: High-Risk Pregnancy al Affiliation Case Study Report: High-Risk Pregnancy The patient in this case study is a 39-year old mother of one young adult. She has however had eight other pregnancies that were coupled with problems and were either terminated electively or she miscarried. This is a comprehensive report of her pregnancy from at 17 weeks gestation. Referral Reason The patient is referred due to her pregnancy being high risk. First, she has a bad obstetric history, having lost seven of the previous pregnancies. She has conceived nine times and has only one surviving child. Further, it is also identifiable that the current pregnancy is coupled with a number of problems. First, she is overage. The risks... of...
7 Pages(1750 words)Research Paper
sponsored ads
Save Your Time for More Important Things
Let us write or edit the essay on your topic "Do high protein diets increase the risk of kidney stones" with a personal 20% discount.
GRAB THE BEST PAPER

Let us find you another Essay on topic Do high protein diets increase the risk of kidney stones for FREE!