Comments (0)
Add to wishlistDelete from wishlist
Cite this document
Summary
Improperly obtained evidence- The English Law in its fairness decides it is rational to exclude improperly obtained evidence so England's policy was to include the evidence regardless of the source or how it was obtained. The most frequently quoted authority was the 1861 decision of R v Leatham where Crompton J said it mattered not how you get it, if you steal it even it would be admissible in evidence (Osborn,1)…
Download full paperFile format: .doc, available for editing
HIDE THIS PAPERGRAB THE BEST PAPER92.2% of users find it useful 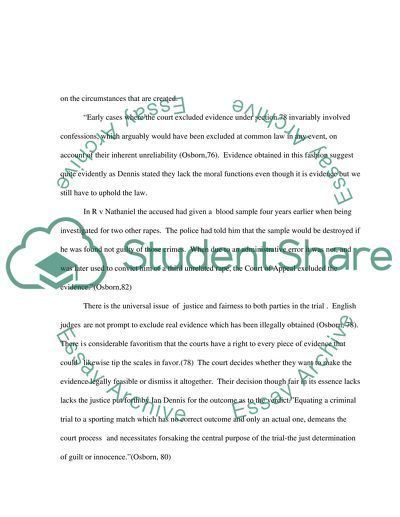 Download file to see previous pages So although Dennis states that we could include inadmissible evidence, it does not in essence be correct with the system in its fairness.
However, Osborn argues that since the courts have been unwilling to set down guidelines as far as the interpretation of the section on improperly obtained evidence therefore we "are left to analyze the case law in order to predict in what circumstances the discretion may arise (1). Here the argument supports Dennis'claim that this form of retrieving evidence can never be lawful since we are left to decide the accused outcome based
confessions, which arguably would have been excluded at common law in any event, on account of their inherent unreliability (Osborn,76). Evidence obtained in this fashion suggest quite evidently as Dennis stated they lack the moral functions even though it is evidence but we still have to uphold the law.
In R v Nathaniel the accused had given a blood sample four years earlier when being investigated for two other rapes. The police had told him that the sample would be destroyed if he was found not guilty of those crimes. When due to an administrative error it was not, and was later used to convict him of a third unrelated rape, the Court of Appeal excluded the evidence."(Osborn,82)
There is the universal issue of justice and fairness to both parties in the trial . English judges are not prompt to exclude real evidence which has been illegally obtained (Osborn, 78). There i s considerable favoritism that the courts have a right to every piece of evidence that could likewise tip the scales in favor.(78) The court decides whether they want to make the evidence legally feasible or dismiss it altogether. Their decision though fair in its essence lacks lacks the justice put forth by Ian Dennis for the outcome as to the verdict."Equating a criminal trial to a sporting match which has no correct outcome and only an actual one, demeans the court process and necessitates forsaking the central purpose of the trial-the just determination of guilt or innocence."(Osborn, 80)
So in the bargain when you obtain a conviction it can never be legal because of the type of

evidence involved. Andrew Choo gave us three possible reasons behind exclusion of illegally
obtained evidence on the grounds of unfairness-deterrence, compensation and repute.(Osborn,97). So in the meantime these hinder reliability, protection (which includes compensation of the victim and broader considerations of judicial integrity.(97) This undoubtedly supports Ian Dennis' arguments that the legal system here cannot be expressed openly.
Mary Hunter claims that a search of LEXIS reveals that between January 1986 and May 1992, there were 106 such cases, giving credence to the claim that PACE has widened the scope of the ...Download file to see next pagesRead More
Share:
Tags
Cite this document
(“Law Evidence Case Study Example | Topics and Well Written Essays - 3000 words”, n.d.)
Retrieved de https://studentshare.org/miscellaneous/1503274-law-evidence

CHECK THESE SAMPLES OF Law Evidence

Let us find you another Case Study on topic Law Evidence for FREE!