Comments (0)
Add to wishlistDelete from wishlist
Cite this document
Summary
Glucose is preferred over lactose for growth and metabolism, as it is clearly indicated in data the activity of -galactosidase induced after 10 h of growth. At this time -galactosidase will cleaved lactose to make glucose. E.coli prefers glucose over lactose and start utilizing glucose in initial stage…
Download full paperFile format: .doc, available for editing
HIDE THIS PAPERGRAB THE BEST PAPER92.9% of users find it useful 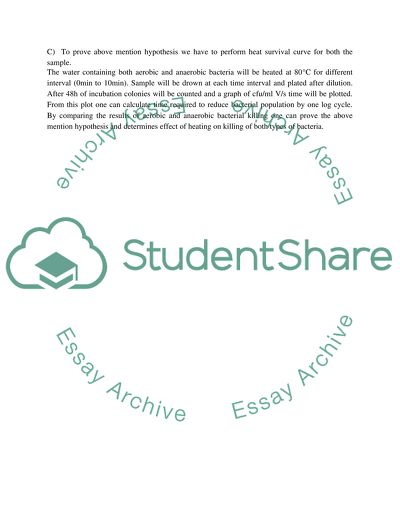 Ans 1a Ans b Answer b: Glucose is preferred over lactose for growth and metabolism, as it is clearly indicated in data the activity of -galactosidase induced after 10 h of growth. At this time -galactosidase will cleaved lactose to make glucose. E.coli prefers glucose over lactose and start utilizing glucose in initial stage. Once glucose gets exhausted it switches over to lactose. Similarly in case of time v/s dry weight plots it indicates biphasic (diauxic growth) growth curve. There is steady increase in dry weight as soon as culture was inoculated and reached to plateau around 10h followed by lag phase for one hour and again there is increase in dry weight. This lag phase needed for organism to switch over to new carbon source (lactose).
Answer c:
Utilization of glucose and lactose is tightly regulated at gene level. All the genes which are necessary for lactose utilization are arranged in sequence called Lac operon which is regulated by catabolic repression. The following events happen during overall process.
1) In case of glucose is presence along with Lactose:
-High level of glucose leads to higher energy production and hence higher ATP and lower AMP. In this scenario there is no free cAMP which binds with CAP( activator protein which facilitates RNA polymerase binding to promoter of Lac operon)and hence there is no expression of the downstream genes.
2) In case of lactose and no glucose:
-In case of lactose, there is high level of cAMP which binds with CAP and induces the expression of Lac operon. Similarly allolactose binds to repressor protein and inhibits its binding to operator site leads to expression of lac operon.
Answer 2:

Viable count in heat treated bottle
Aerobic plating: 2.15X105 cfu/ml
Anaerobic plating: 0 cfu/ml
b) Here if we closely look at the data and compare the viable count of aerobic culture it indicates reduction of 1.3X105 cfu/ml when bottle heated at 80C for 10 min. Similarly, for untreated bottle anaerobic viable count is 1.22X105 cfu/ml and if heating have similar effect than there will be complete killing of anaerobic bacteria and we will not get any viable count. Based on this experiments primary evidence says that there is similar effect of heating on both aerobic ad anaerobic bacteria.
C) To prove above mention hypothesis we have to perform heat survival curve for both the sample.
The water containing both aerobic and anaerobic bacteria will be heated at 80C for different interval (0min to 10min). Sample will be drown at each time interval and plated after dilution. After 48h of incubation colonies will be counted and a graph of cfu/ml V/s time will be plotted. From this plot one can calculate time required to reduce bacterial population by one log cycle. By comparing the results of aerobic and anaerobic bacterial killing one can prove the above mention hypothesis and determines effect of heating on killing of both types of bacteria. Read More
Share:
Tags
Cite this document
(“Microbial Physiology Essay Example | Topics and Well Written Essays - 500 words”, n.d.)
Microbial Physiology Essay Example | Topics and Well Written Essays - 500 words. Retrieved from https://studentshare.org/miscellaneous/1502256-microbial-physiology

CHECK THESE SAMPLES OF Microbial Physiology

D. Smooth muscle cells: Though smooth muscle cells are recruited by day 3 or 4 of the wound along with fibroblasts, myofibroblasts, pericytes, and smooth muscle cells, their main role is fibroplasia, synthesis of connective tissue matrix, tissue remodeling, wound contraction, and wound strength. They do not produce cytokines and chemoattractants (Sephel, 72). Hence this is not the correct answer.
A 68-year-old man with prostate cancer and bone metastases presents with shaking chills and fever. The peripheral WBC count is 1,000/uL (normal = 4,000-11,000/uL). Which of the following terms best describes this hematologic finding?
A. Leukocytosis: This is not the correct answer because leukocytosis means an increase in WBC co...

...﻿ Gender and Anatomical Analysis of the Grande Pas de deux in Marius Petipa’s 'Sleeping Beauty' Abstract Gender and physiology of the Grande Pas de Deux are intertwined with each other in such a way that they interact on various levels to carry out a number of themes at a time. The ideology of gender plays a crucial role throughout the whole episode of Grande Pas de Deux. In the first place, masculinity has been put into contrast with femininity with a view to highlight the visual effects of the superiority of a prince (the male partner of the ballerina) who rather inspires his audience to view Aurora and her nation from the standpoint of a liberator. As the original story of the ballet permits, the Grande Pas de Deux...
27 Pages(6750 words)Dissertation

...﻿Physiology of Addiction Abstract Addiction of various substances which act on the central nervous system is a major social and health problem. When the person takes the drug or alcohol for the first time, the intention is only to ‘try’. The pleasure derived from these substances makes the individual take the drug again and again which triggers a reward circuit and causes addiction. Addiction is due to many complex neurobiological and physiological factors and understanding of these is important to treat and conduct research on pharmacotherapeutics. This article explores the physiological and neurobiological aspects of addiction to bring about an understanding of the behavior of addiction. Introduction Pleasure, a complex...
10 Pages(2500 words)Research Paper

Investigation of Arabic Gum as An Anti-Microbial

...﻿Investigation of Arabic Gum as An Anti-Microbial There are quite a number of benefits accrued to the Gum Arabic, apart from being a great of source of income and a great player in fighting global warming, it is majorly recognized for the prevention and curing of diseases associated with poor lifestyles.This paper aims at assessing the protective effect of GA as well as the extraction and preparation methods of GA. Kutlu (2011) defines probiotics as live microorganisms that have the ability to confer a health benefit to when dispensed in ample amounts. On the same note, he also defines prebiotics as “foods or food supplements that contain a non-digestible food component that selectively stimulates the favorable growth and/or activity...
6 Pages(1500 words)Research Paper

... significant mechanism for the scheduled regulation of enzyme activity. At the same time, enzyme concentration is regularly modulated in accordance with physiological requirements. The concentration of active enzyme in tissue is known to be normally controlled by three key mechanisms; A) the enormity and rate of enzyme synthesis is controlled by the regulation of gene expression B) enzyme dilapidation is regulated by proteolytic enzyme activity C) Active enzymes are generated from pre-existing pools of inactive pro enzymes through covalent modification (Raja et al., 2011). Early Discoveries of Enzyme The existence of enzymes has been acknowledged by scholars since two centuries. It was the Swedish chemist Jon Jakob Berzelius who performed...
11 Pages(2750 words)Literature review

This project, therefore, aimed at establishing the voltage generated from three microbial species Shewanella oneidensis, Pseudomonas trivialis and Escherichia coli using H-type microbial fuel cells using synthetic wastewater as the substrate. E. coli generated the highest voltage and yielded a power density of 192.887 mW/m2 followed by S. oneidensis with 134.429 mW/m2 and least of all P. trivialis with 89.098 mW/m2. P. trivialis recorded the highest levels of COD removal (140%) followed by E. coli (133%) and finally S. oneidensis (44.08%). However, the coulombic efficiencies were lower than the literature values. These results meant that of the three microorganisms, E. coli was the best in voltage generation and that further studi...
21 Pages(5250 words)Lab Report

Diseases Based on Physiological Changes Seen with Normal Thyroid Physiology

...﻿Niemann-Pick Disease Physiology Niemann-Pick Disease Physiology Niemann-Pick disease (NPD) is a group of rare, severe, inherited autosomal receding metabolic syndromes in which there is a dearth of the enzyme acid sphingomyelinase (ASM). Chromosome groups 11p15.1-p15.4(1) have SMPD1 gene which determine this lysosomal enzyme, whose deficiency leads to accumulation of sphingomyelin, cholesterol and other lipids in the major organs like liver and spleen. Mutation of SMPD1 causes NPD types A and type B (Hamosh & McKusick, 2016). Type C is caused by mutation of NPC gene and is classified as C1 and C (Cvitanović-Šojat et al., 2014). In 1914, Albert Niemann published the original description of NPD. His work was later improved by Ludwig Pick...
7 Pages(1750 words)Assignment
sponsored ads
Save Your Time for More Important Things
Let us write or edit the essay on your topic "Microbial Physiology" with a personal 20% discount.
GRAB THE BEST PAPER

Let us find you another Essay on topic Microbial Physiology for FREE!