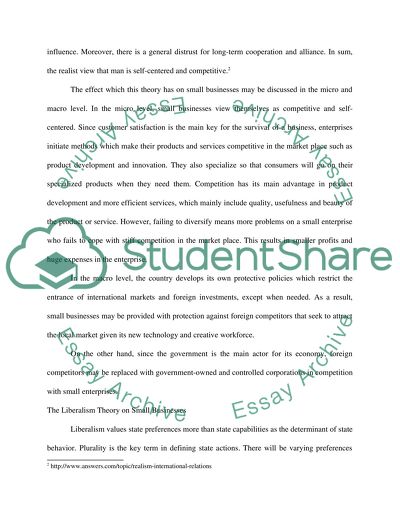 Download file to see previous pages Two positivist schools of thought are prevalent: the realism and liberalism theories. This article will discuss the realism and liberalism theories as well as the popularly-known theory on Marxism, functionalism and constructivism, and their impacts on small businesses.
The realism theory has several assumptions. Among these is the unitary form of nation-states with geographically-based actors having no authority above capable of regulating relations between states, hence, the assumption regarding the non-existence of a true world government. Further, the theory assumes that the sovereign states are the principal actors in international relations rather than non-government organizations. This leads to a situation where states compete with one another. The state also acts as the main actor for its own security and economic interests with a view that international corporations have little long-term independent influence. Moreover, there is a general distrust for long-term cooperation and alliance. In sum, the realist view that man is self-centered and competitive.2
The effect which this theory has on small businesses may be discussed in the micro and macro level. In the micro level, small businesses view themselves as competitive and self-centered. Since customer satisfaction is the main key for the survival of a business, enterprises initiate methods which make their products and services competitive in the market place such as product development and innovation. They also specialize so that consumers will go on their specialized products when they need them. Competition has its main advantage in product development and more efficient services, which mainly include quality, usefulness and beauty of the product or service. However, failing to diversify means more problems on a small enterprise who fails to cope with stiff competition in the market place. This results in smaller profits and huge expenses in the enterprise.
In the macro level, the country develops its own protective policies which restrict the entrance of international markets and foreign investments, except when needed. As a result, small businesses may be provided with protection against foreign competitors that seek to attract the local market given its new technology and creative workforce.
On the other hand, since the government is the main actor for its economy, foreign competitors may be replaced with government-owned and controlled corporations in competition with small enterprises.
The Liberalism Theory on Small Businesses
Liberalism values state preferences more than state capabilities as the determinant of state behavior. Plurality is the key term in defining state actions. There will be varying preferences from state to state and international relations are not only based on political matters but also on economic matters whether through international organizations, commercial firms, partnerships or individuals. The concept of liberalism flows in international cooperation and wider notions of power.3
The impact of liberalist policies on small enterprises is material. As a result of government's liberal concept, less restrictive economic policies are being initiated that invite foreign competition. The local small business enterprises may have difficulty in coping with foreign competitio ...Download file to see next pagesRead More
Share:
Tags
Cite this document
(“International Relations Theories and Business Essay”, n.d.)
International Relations Theories and Business Essay. Retrieved from https://studentshare.org/miscellaneous/1502117-international-relations-theories-and-business

CHECK THESE SAMPLES OF International Relations Theories and Business

... to effectively manage and handle the business operations and management. Club IT business main objective is potentially enhancing the customer satisfaction and augment the business revenue. Therefore they want to deploy a new information technology based structure. These can be related to the effective business management, accurate business decision making, value based services to customer and effective resource management. The main strategy of the business is to establish a completely renovated business and management structure. This new structure will offer effective customer management and handling. Here we will also obtain more customer loyalty and Club IT business will attain a better competitive edge in the overall market place...
8 Pages(2000 words)Case Study

... Introduction In the second part of the Prolegomena, how does Kant describe the workings of the understanding? What is the role of the understanding, in other words? Immanuel Kant is one of the successful modern philosophers who attempted to reconstruct the fundamentals of philosophy and succeeded to a considerable extent. His remarkable criticisms on the theories of metaphysics were encapsulated and summarized in Prolegomena; it sets forth a specific problem that is resolved with an extensive feasible argument. In the second part of Prolegomena Kant has asked questions on the purity of ‘natural scientific cognition’ which refers to the knowledge of laws based on the natural universal science like “that everything that happens always...
6 Pages(1500 words)Assignment
sponsored ads
Save Your Time for More Important Things
Let us write or edit the essay on your topic "International Relations Theories and Business" with a personal 20% discount.
GRAB THE BEST PAPER

Let us find you another Essay on topic International Relations Theories and Business for FREE!