Comments (0)
Add to wishlistDelete from wishlist
Cite this document
Summary
Initially,it is incumbent to note what 9/11 Commission is all about,including the essence of it establishment.However,"The National Commission on Terrorist Attacks Upon the United States,an independent,bipartisan commission created by congressional legislation …
Download full paperFile format: .doc, available for editing
HIDE THIS PAPERGRAB THE BEST PAPER93.2% of users find it useful 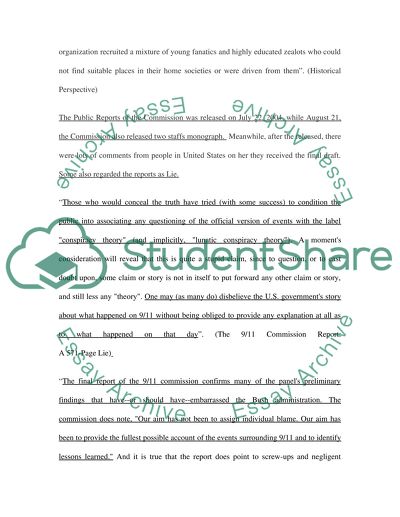 Download file to see previous pages Bush in late 2002, is chartered to prepare a full and complete account of the circumstances surrounding the September 11, 2001 terrorist attacks, including preparedness for and the immediate response to the attacks. The Commission is also mandated to provide recommendations designed to guard against future attacks". (National Commission on Terrorist Attacks upon the United States)Meanwhile, to preview the 9/11 attack on American, it is very significant to state that "the 9/11 attack was in some ways more devastating. It was carried out by a tiny group of people, not enough to man a full platoon. Measured on a governmental scale, the resources behind it were trivial. The group itself was dispatched by an organization based in one of the poorest, most remote, and least industrialized countries on earth. This organization recruited a mixture of young fanatics and highly educated zealots who could not find suitable places in their home societies or were driven from them". (Historical Perspective)The Public Reports of the Commission was released on July 22, 2004, while August 21, the Commission also released two staffs monograph. Meanwhile, after the released, there were lots of comments from people in United States on her they received the final draft. Some also regarded the reports as Lie.
"Those who would conceal the truth have tried (with some success) to condition the public into associating any questioning of the official version of events with the label "conspiracy theory" (and implicitly, "lunatic conspiracy theory"). A moment's consideration will reveal that this is quite a stupid claim, since to question, or to cast doubt upon, some claim or story is not in itself to put forward any other claim or story, and still less any "theory". One may (as many do) disbelieve the U.S. government's story about what happened on 9/11 without being obliged to provide any explanation at all as to what happened on that day". (The 9/11 Commission Report:
A 571-Page Lie)
"The final report of the 9/11 commission confirms many of the panel's preliminary findings that have--or should have--embarrassed the Bush administration. The commission does note, "Our aim has not been to assign individual blame. Our aim has been to provide the fullest possible account of the events surrounding 9/11 and to identify lessons learned." And it is true that the report does point to screw-ups and negligent policymaking committed during both the Bush II and Clinton administrations. But George W. Bush is the incumbent president who has to face the voters in November. Although Republicans in recent days have been highlighting the mistakes of the Clinton years, it is not inappropriate for voters to focus on what report tells us about Bush and his administration. As a public service, here is a look at several of those critical portions". (The 9/11 Reports: Bad News to Bush)
The US Political leaders and other relations of the victims also reacted on how they received the final reports of 9/11 Commission. US President Bush, comments that "They've done a really good job of learning about our country and learning about what went wrong prior to 11 September, and making very sound, solid, recommendations about how to move forward. I assured them that where government needs to act, we will.
"There is still a threat. We in the government have an obligation to do everything in our power to safeguard the American people." (Reaction to 9/11 Reports)
CONCLUSION:
In conclusion, we have seen and make assessments on the genesis of the 9/11 Commission which was inaugurated in order to investigate the causes of 9/11 attack on America. While members of the Commission seemed to ...Download file to see next pagesRead More
Share:
Tags
Cite this document
(“911 Commissino Report Essay Example | Topics and Well Written Essays - 750 words”, n.d.)
911 Commissino Report Essay Example | Topics and Well Written Essays - 750 words. Retrieved from https://studentshare.org/miscellaneous/1502060-911-commissino-report

CHECK THESE SAMPLES OF 911 Commissino Report

The Role of Entrepreneurship in Economic Development

A Strategic Analysis of Royal Mail: An Exploratory Study of the Strategic Issues of Globalisation, Privatisation, and Liberalisation

Let us find you another Essay on topic 911 Commissino Report for FREE!