Comments (0)
Add to wishlistDelete from wishlist
Cite this document
Summary
It has been said that every human being of adult years and sound mind has a right to determine what shall be done with his own body. In other words, he/she has the freedom and right to choose whatever he decides for his own body but of course with consent to medical treatment and participation in clinical research informing the patient of what he/she is consenting to…
Download full paperFile format: .doc, available for editing
HIDE THIS PAPERGRAB THE BEST PAPER91.1% of users find it useful 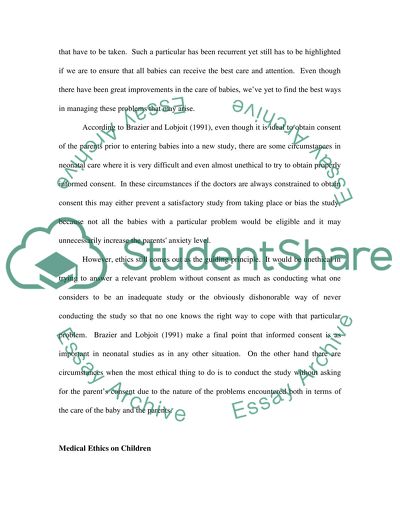 Download file to see previous pages Additionally, it is also a decisive concern on who acts on the person's behalf if he/she is incompetent in order to protect his/her interests. It is stated clearly as one of the rights of patients that they have a right to refuse treatment to the extent permitted by law (Annas 1989). Despite the critical issue in medical law that surrounds the protection of interests on children and incompetent adults, the decisions as to the withholding or withdrawal of medical treatment is being settled on the discretion of the court provided that patient's incompetence has been clearly determine.
Most of the problems and difficulties when working with very premature babies are related to practical problems of the management and medical treatment. This has created confusion between parents and the medical staff on their decision over the actions that have to be taken. Such a particular has been recurrent yet still has to be highlighted if we are to ensure that all babies can receive the best care and attention. Even though there have been great improvements in the care of babies, we've yet to find the best ways in managing these problems that may arise.
According to Brazier and Lobjoit (1991), even though it is ideal to obtain consent of the parents prior to entering babies into a new study, there are some circumstances in neonatal care where it is very difficult and even almost unethical to try to obtain properly informed consent. In these circumstances if the doctors are always constrained to obtain consent this may either prevent a satisfactory study from taking place or bias the study, because not all the babies with a particular problem would be eligible and it may unnecessarily increase the parents' anxiety level.
However, ethics still comes out as the guiding principle. It would be unethical in trying to answer a relevant problem without consent as much as conducting what one considers to be an inadequate study or the obviously dishonorable way of never conducting the study so that no one knows the right way to cope with that particular problem. Brazier and Lobjoit (1991) make a final point that informed consent is as important in neonatal studies as in any other situation. On the other hand there are circumstances when the most ethical thing to do is to conduct the study without asking for the parent's consent due to the nature of the problems encountered both in terms of the care of the baby and the parents.
Medical Ethics on Children
As much as caring with premature babies, infants and children draw up concerns that ought somebody to be particularly careful (WMA 1989). The MRC (1964) suggest strict rules to be followed by hospitals in dealing with children. The council suggested that one cannot undertake research on children that is not directly intended to benefit those children. And in 1973, the RCP (1973) permits the non-therapeutic research as an exemption and could be conducted if those procedures brought about negligible risk or discomfort. However, the guidelines failed to define what is meant by "negligible. It was the BPA guidelines in 1980 that lays out particular consideration in non-therapeutic research on children. They suggest the consideration of an examination of the degree of benefit which might result. One particular example given ...Download file to see next pagesRead More
Share:
Tags
Cite this document
(“Premature babies' medical care Essay Example | Topics and Well Written Essays - 1000 words”, n.d.)
Premature babies' medical care Essay Example | Topics and Well Written Essays - 1000 words. Retrieved from https://studentshare.org/miscellaneous/1501800-premature-babies-medical-care

Clinical studies show that individuals who are diagnosed with mental illness usually reveals a pattern of psychological behavior which could result in either a short or long-term illness and...
11 Pages(2750 words)Term Paper

... level of societal well-being, there is very little freedom for the planner or administrator to decide otherwise (Whittington, 2008, p.18). The horizontal equity principle in prioritizing CEA in health care intervention environments has acquired a new dimension recently. The ability of the patient to pay the medical bill or affordability maters in every health care establishment whether it’s run by the private sector or the government sector. Especially in a free market economy this is essential. However, health insurance mostly obviates the need to apply this principle on the assumption that every patient would have the means to meet his or her medical cost. Finally the most debated efficiency criterion with regard...
8 Pages(2000 words)Case Study

The federal government, through the 2009’s Controlled Substances Act, makes the use of marijuana a criminal offense. However, various states, such as Arizona, Colorado, and California, have legalized the use of cannabis for therapeutic purposes. This paper presents an argument that marijuana should be made legal for its therapeutic uses.
The legalization of medical cannabis is justified because of the positive therapeutic effects of the drug. Proponents of the legalization of medical cannabis argue that if marijuana is made illegal, patients will not be able to access and use it for the relief of their symptoms (Gwynne 29). Marijuana has been reported to be a safe drug for the treatment of various conditions. The drug a...
6 Pages(1500 words)Case Study
sponsored ads
Save Your Time for More Important Things
Let us write or edit the essay on your topic "Premature babies' medical care" with a personal 20% discount.
GRAB THE BEST PAPER

Let us find you another Essay on topic Premature babies' medical care for FREE!