Comments (0)
Add to wishlistDelete from wishlist
Cite this document
Summary
Law of any country is a code which regulates the conduct of the member of a society. It touches nearly all we do to make us live in the society without harming our fellow beings. In the course of the progress of human society this enforced code of conduct became the basis of law…
Download full paperFile format: .doc, available for editing
HIDE THIS PAPERGRAB THE BEST PAPER97.1% of users find it useful 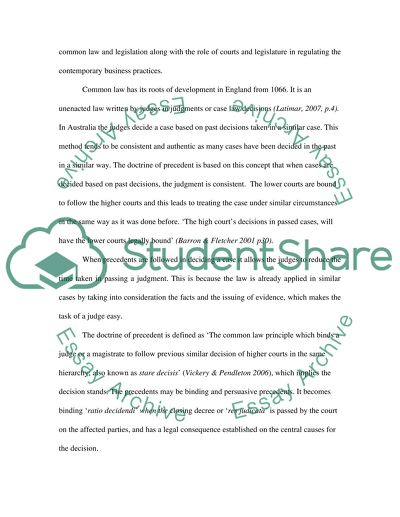 Download file to see previous pages Legislation is the only solution to face the challenging situation.
In fact, Law is de jure and is applied by a country to regulate the relationship between its people, government and business. Oliver Wendell Holmes, Jr., in his great law book, The Common Law (1881) states: "The life of the law has not been logic; it has been experience". This contradicts English jurist Sir Edward Coke's observation that 'logic is the life of the law'.
The legal system of Australia is governed by common law developed by case laws and precedents, and included in it are equity law and a little of statute law. Based on Grew (2002), the legal system of Australia has two sources. The first one is the parliament that is legislation, and the other is the judicial courts that are responsible for case laws. Legislations are created by parliament and the courts put forward the law by means of precedents. Here, in this essay, we analyze the strength and weaknesses of common law and legislation along with the role of courts and legislature in regulating the contemporary business practices.
Common law has its roots of development in England from 1066. It is an unenacted law written by judges in judgments or case law decisions (Latimar, 2007, p.4). In Australia the judges decide a case based on past decisions taken in a similar case. This method tends to be consistent and authentic as many cases have been decided in the past in a similar way. The doctrine of precedent is based on this concept that when cases are decided based on past decisions, the judgment is consistent. The lower courts are bound to follow the higher courts and this leads to treating the case under similar circumstances in the same way as it was done before. 'The high court's decisions in passed cases, will have the lower courts legally bound' (Barron & Fletcher 2001 p30).
When precedents are followed in deciding a case it allows the judges to reduce the time taken in passing a judgment. This is because the law is already applied in similar cases by taking into consideration the facts and the issuing of evidence, which makes the task of a judge easy.
The doctrine of precedent is defined as 'The common law principle which binds a judge or a magistrate to follow previous similar decision of higher courts in the same hierarchy; also known as stare decisis' (Vickery & Pendleton 2006), which implies the decision stands. The precedents may be binding and persuasive precedents. It becomes binding 'ratio decidendi' when the closing decree or 'res judicata' is passed by the court on the affected parties, and has a legal consequence established on the central causes for the decision.
"Common law relies on precedent. However, precedent is an illogical and inefficient tool for the regal regulation of business. Legislation is much more effective in the regulation of modern business practices". This statement stands good in the modern day judgments. Even though common law is tailor made and easy to follow, it still has its own pitfalls.
The major weakness of common law is that, the precedent followed in sensitive cases may not be relevant for the present case. Also it could limit the development of law. As common law depends on past cases and the society is changing rapidly so it is obvious that history may not repeat itself in the same way and under the same circumstances. It becomes very difficult ...Download file to see next pagesRead More
Share:
Tags
Cite this document
(“BUSINESS LAW Essay Example | Topics and Well Written Essays - 2250 words - 1”, n.d.)
BUSINESS LAW Essay Example | Topics and Well Written Essays - 2250 words - 1. Retrieved from https://studentshare.org/miscellaneous/1501697-business-law

CHECK THESE SAMPLES OF BUSINESS LAW

... the monthly sales Calculating monthly cost and benefit Calculating employs salaries (over time, bonus, etc.) Data Mining for Business Performance According to (Thearling, 2009) and (Berson, Smith, & Thearling, 2000), “Data mining is the method of extracting hidden predictive information from huge databases. Data mining is a commanding modern technology with huge potential to facilitate organizations spotlight on the vital information in their data warehouses”. Data mining techniques for the business management of Club IT is aimed to position the actions through which they would be able to find out the new laws, undiscovered relations, concealed knowledge, defaulting in data in huge databases. The initial purpose of data mining at Club...
8 Pages(2000 words)Case Study

While each force of globalization is important, the technological revolution has impacted the business models, value creation and differentiation (Spelman, 2010). The cloud computing technologies that have made the popular social networking applications possible are now being applied to development, healthcare, and society. Today mobile telephones are more like powerful computers that take care of many of the societal challenges facing both developed and developing countries (Evans, 2010). In Chile, new software enables weather information to farmers who can now make informed decisions on when and how to sow or harvest the crops. However, the fear or ignorance of cloud computing technology could harm the chances of the SMEs becomi...
7 Pages(1750 words)Coursework
sponsored ads
Save Your Time for More Important Things
Let us write or edit the essay on your topic "BUSINESS LAW" with a personal 20% discount.
GRAB THE BEST PAPER

Let us find you another Essay on topic BUSINESS LAW for FREE!