Comments (0)
Add to wishlistDelete from wishlist
Cite this document
Summary
In literary discourse, context and meaning are interconnected in the sense that the context has great significance to a complete interpretation of the literary piece's meaning and the poem "Abraham to Kill Him" by Emily Dickinson illustrates this relation, where the literary context of the poem interprets the biblical story of Abraham's sacrifice differently from the traditional meaning.
…
Download full paperFile format: .doc, available for editing
HIDE THIS PAPERGRAB THE BEST PAPER96.1% of users find it useful 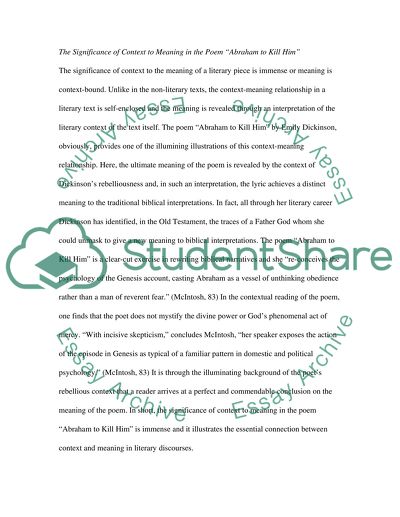 CHECK THESE SAMPLES OF Linguistics

... English Linguistics Extract: “In any school their must have a fight. Even in preste school their must be a fight. Fight usually starts over argument. If someone tells a person something bad they would want to fight. I have seen very bad fight. One day I was by my father’s farm. My father and his brother started to corral then eventually started to fight like little children. They fight until my uncle got a cut. Since I come this school I have never being in any fight. Their are no rule for fighting almost every day there is fight in our class.” Within this extract, there are several deviations from standard English that should be corrected. The usage of the word ‘their’ in the first sentence is supposed to be referring to a location...
2 Pages(500 words)Essay

In the sense, they will imitate every aspect and word more like how they observe than what is the exact. While imitating, almost all the children reflect a tendency to make errors, these errors could be explained as general among all children, who may belong to any origin.
Some of the common errors or overgeneralizations that could be identified among children are applying the meaning of a universal statement to all exceptions. This is a behavioural mistake realised among all children. For example if “dog is explained in terms of an animal having four legs, and birds in terms of all that flies”, the child will associate all animals with four legs as dogs, and all that flies as birds, including an insect.
The simplest examp...
5 Pages(1250 words)Essay

... pieces written over time, and this paper will actually look at how bravado and linguistics play an important role in literature. Bravado means a false bravery and it comes from the word brave, but it is the complete opposite of its meaning. This can possibly be applied in describing people who in the real sense are cowards, but they pretend to be brave because of a certain reason. These people at first often show that they are very brave but eventually, they turn out to be cowards. Linguistics on the other hand is the scientific study of human language as a whole, and it can be divided into different categories to help understand and decipher linguistics. These categories are three in number and they include language form, language meaning...
7 Pages(1750 words)Research Paper

... Linguistics Question 5 a. The use of the slanted lines helps differentiate underlying form, which it represents fromits phonemic realization. /tajt/ is therefore the underlying form while the phonetic representation shows the placement of stress and the movement of the tongue. b. Just as is the case with the first question, the slanted segment is the underlying representation. The pronunciation shows the stress placed in “e” and recognition of “t” since the letter influences the sound. c. The same applies to the k in the brackets has a significant sound producing function thus the h mark. The : shows the elongated nature of the relationship between I and d. d. In the last word, the pronunciation of r and a remains the same while tI...
1 Pages(250 words)Assignment

...y objects they refer to and the situations they describe. This is to ensure that the child links together the words that are related. However the elder sister of the child, pragmatics is keen in on the context of the situation. He studies the use of language in communication, particularly the relationships between sentences and the contexts and situations in which they are used. The grandmother, stylist ensures that the child varies the language depending on the situation in which the language is used and also on the effect the speaker wishes to create on the hearer. This is to ensure that the child grows to be good. (Crystal, 1997) It should be noted that linguistic can be applied and this forms applied linguistics. Normally, this...
2 Pages(500 words)Research Paper

...﻿Applied Linguistics and Second Language Acquisition The primary motivations for applying to Applied Linguistics and Second Language Acquisition program stems from an interest in undertaking research in SLA and language pedagogy. I am attracted to the course by the prospect of gaining knowledge of the linguistic modalities with the goals of research in SLA and disseminating acquired information in Applied Linguistics. Teaching and research are the avenues along which I foresee my career progressing. My ultimate objective is to become a scholar of linguistics and to return to the classroom as a teacher of English and foreign languages. Language pedagogy has always been my unflinching passion; and my experiences of teaching English...
4 Pages(1000 words)Essay

.... He begins by drawing our attention to Brumfit’s assertion (1991) that applied linguists try to offer solution to ‘the real-world problems in which language is a central issue’. He explains this by drawing our attention to the usefulness of applied linguistics by discussing how professionals like speech therapists, teachers of mother-tongue and foreign languages, forensic experts, advertising copy writers, historians, literary scholars, lexicographers, language planners , zoologists and others approach linguistics to get solutions for language-related problems in their work. When these professionals turn to the discipline of Linguistics to seek insight and...
7 Pages(1750 words)Essay

... confusion with what is being conveyed by the sentence and may lead to different interpretations of the meaning. Words like ‘light’ could mean both not dark and not heavy. The presence of these words in a sentence can have both a lexical and structural basis of ambiguity. Meaning of a Sentence The meaning of a sentence is an important part of learning linguistics. The meaning of a sentence in linguistics is the message the source articulates to the recipient. Some of the factors that may affect meaning are pragmatics, semantics, ambiguity and conceptual meaning. Studying sentence meaning raises important issues on the relevant data, on the relationship between this data and theories and the use concepts as intuitions about the data...
12 Pages(3000 words)Coursework
sponsored ads
Save Your Time for More Important Things
Let us write or edit the essay on your topic "Linguistics" with a personal 20% discount.
GRAB THE BEST PAPER

Let us find you another Essay on topic Linguistics for FREE!